Breakfast is still booming, and, as the category sees continued interest, innovation keeps things dynamic. When looking for assertive, on-trend, exciting flavors, more chefs are turning their attention toward global hotspots like Japan, Korea, India and Mexico, to name a few. And although there are examples of authentic replication of dishes like Mexican chilaquiles or Japanese congee, what’s really setting things off is the global mash-up.

At Saffron Indian Bistro in San Carlos, Calif., the brunch menu melds American with Indian seamlessly. Its Indian-style grits are served with steamed vegetables and raita. And its Masala Omelet demonstrates how a familiar format can serve as a perfect platform for flavor adventure.

“The Masala Omelette, with onion, ginger, jalapeño, turmeric and chile, is simple yet bursting with the flavors and spices of India,” says Ajay Walia, owner. “Unlike a traditional American omelette that is soft and stuffed with favorites, this one is heavily spiced and crisped on both sides for extra oomph.”

Thanks to a fortified anchor of familiarity provided by a number of different comfort foods, there is no limit to globally inspired breakfast items.

Mexican fare is a familiar fixture in this daypart, thanks to beloved items like breakfast burritos and tacos, and, more recently, chilaquiles and huevos rancheros. But chefs are also leveraging the familiarity and love of Mexican cuisine, tethering ingredients and flavors to traditionally American fare.

At The Mockingbird in Nashville, Tenn., Brian Riggenbach, executive chef, offers Kiss My Grits, which gives a Mexican spin to a Southern staple through the addition of roasted mushrooms, huitlacoche, epazote and spinach.

“Chilaquiles are an essential Mexican breakfast that have now found their way to mainstream American cuisine,” says Chauhan. “We gave them an Indian twist with vindaloo, which is a spicy sauce that’s actually great for Bloody Marys, too.”

Mexican mashing with French fare can be found at Trois Familia in Los Angeles, with brunch items like the Beet Tartare Tostada with cornichon, lime and avocado crema.

Chefs have delved into the craveable flavors of Japan over the last few years, translating dishes from okonomiyaki (savory pancake) and ramen to katsu sando (fried pork sandwiches) and karaage (fried chicken). A number of dishes are making their way onto breakfast and brunch menus, including congee (rice porridge) and ramen.

Another Japanese star is emerging. The tamagoyaki is a Japanese omelette with layers of cooked egg rolled together, often flavored with soy and/or sugar. Its appearance on menus reflects both an embrace of Japanese mash-ups and a steadfast love affair with all things egg.

And at Pokirrito in San Diego, the Tamagosando is a sandwich that stars the traditional Japanese omelette, along with a choice of teriyaki-marinated, flame-blistered Spam; tempura shrimp with spicy tartar sauce; pounded cutlets of Angus beef; chicken slathered in tonkatsu sauce; and a selection of organic tempura vegetables. Each is wrapped in a freshly toasted sheet of sushi-grade nori.

A natural for breakfast or brunch adoptions, tamagoyaki is an on-trend platform for global comfort dishes.

In the breakfast space, we’re seeing chefs reach for Japanese flavors and ingredients, then meld them into American breakfast fare. 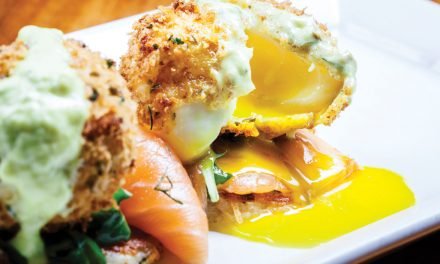 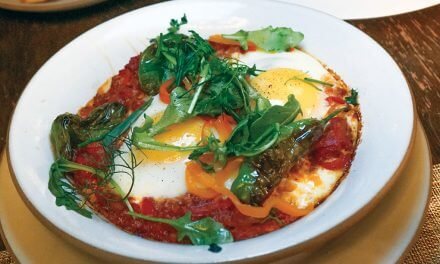 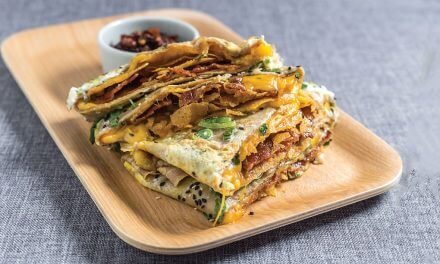