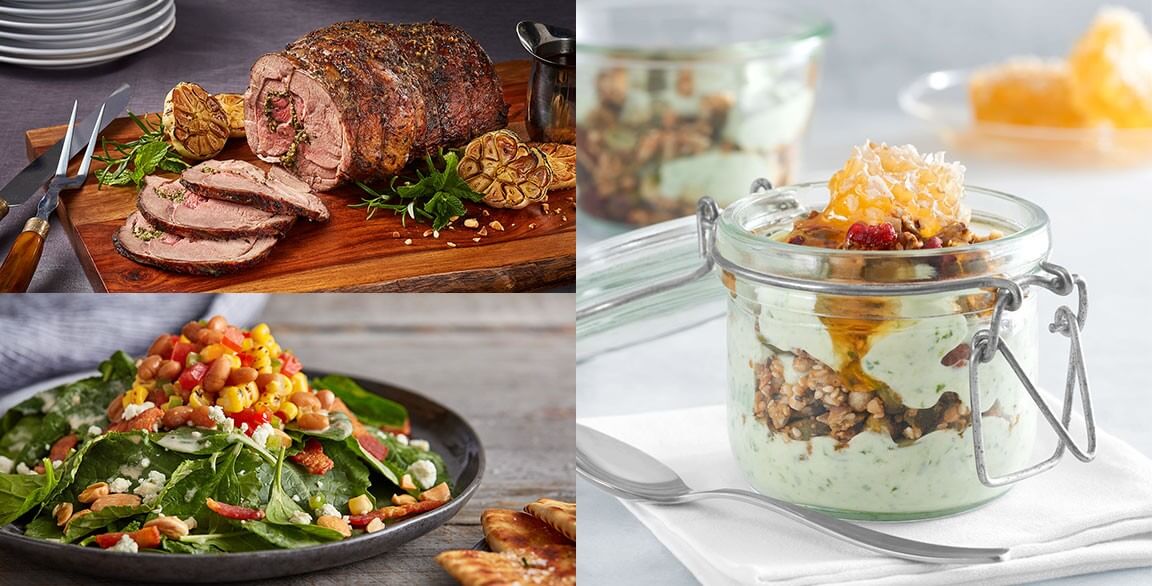 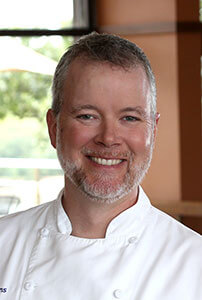 As Director of Menu Development for Culver Franchising System, based in Prairie du Sac, Wis., Quinn Adkins demonstrates a meticulous attention to quality of ingredient and culinary technique. And although Culver’s is known for its burgers, boasting both loyal fans and industry accolades, the quick-serve brand was recently rated number-one by The Takeout in its “Fast Food Fish Sandwich Power Ranking” for its Lenten limited-time offering of a North Atlantic Cod Fillet Sandwich. Adkins applies a laser focus on flavor in everything he develops, clearly evident in the three recipes he developed for Kitchen Collaborative: a nutrient-rich Honey-infused “Super Muesli,” an elegant Herb-roasted Aussie Leg of Lamb with Hazelnut Demi-glace, and a savory, flavorful Spinach and Kale Salad with Baked Bean “Caviar.” 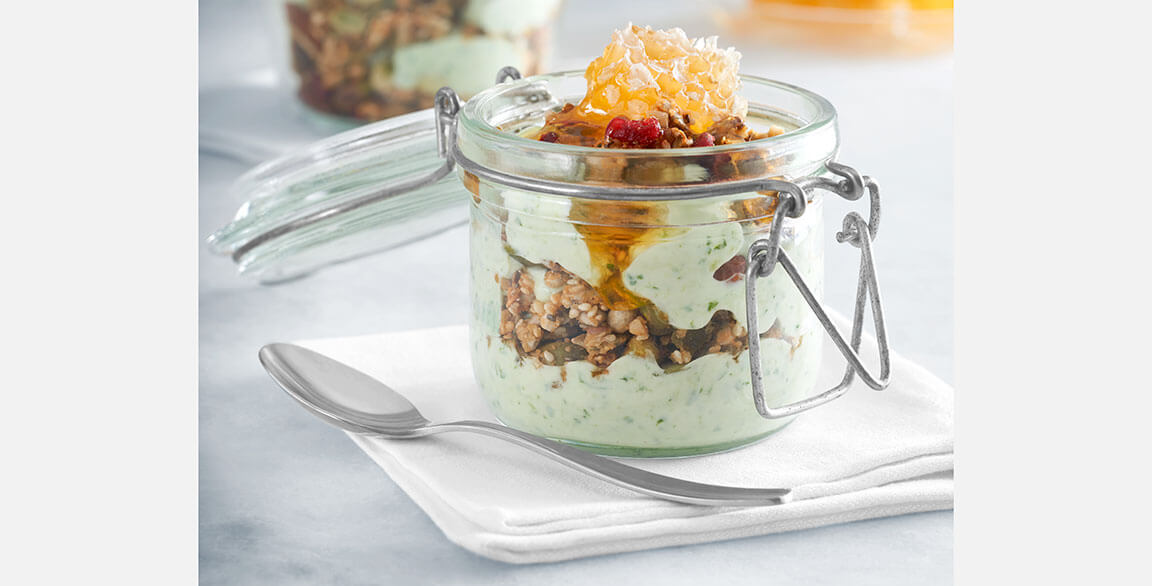 Adkins layers function and flavor into his Honey-infused “Super Muesli.” “This fun little riff on a breakfast parfait demonstrates how you can prioritize both nutrition and flavor, without compromising either,” he says. He chooses live-culture plain yogurt as the base for the muesli, infusing it with a super-food blend of crystallized ginger, apple juice, baby kale and MCT oil. “I’m a big fan of the Icelandic skyr-style yogurt as it tends to be a little thicker than Greek-style yogurts and holds up well to infusing ingredients without compromising viscosity,” says Adkins. MCT oil plays double duty here. “One of MCT oil’s purported functional benefits is as a brain and metabolism booster,” he says. “It also adds a fat to the infusion, which helps the blender break down the fiber-laden kale.” To sweeten the muesli, Adkins turns to honey. “I’m such a fan of honey—nature’s original sweetener. It’s loaded with polyphenols, a superfood antioxidant, it may help bolster your immune system, and it’s an incredibly efficient flavor enhancer,” he says.

To build the “parfaits,” he layers honeyed yogurt and a granola/trail mix, then garnishes it with fresh honeycomb. “It adds a strong visual dynamic and ‘sells’ the honey message,” he says. That messaging is important to Adkins. “I want to raise awareness on the critical role bees play in support of our agriculture, our ecosystems, and our planet. As an industry, we rely on bees far more than most people realize—they pollinate 80 percent of our most important crops, including apples, blueberries and almonds,” he says. “I strongly encourage local farmers and ranchers to contribute back to the symbiotic relationship by supporting bee-friendly cultivars.”

Adkins goes for a centerpiece star when challenged with developing a lamb recipe, his Herb-roasted Aussie Leg of Lamb with Hazelnut Demi-glace. “A whole leg of lamb is a stunning centerpiece presentation,” he says. “The rich, deep flavor of lamb has always been a favorite of mine. Australian lamb, which is pasture-raised, imparts a terroir aspect to the protein, which chefs can then leverage as they plan their dishes. For those chefs that have only enjoyed domestic lamb, I cannot recommend Aussie lamb enough. It’s a stunning contrast.”

After butterflying and trimming a boneless leg, he rolls it in a bright mixture of mint, rosemary, thyme, shallots, garlic, olive oil and red wine vinegar, then seasons it, tightly rolling it and tying it, then sous vides the lamb. Once cooked, Adkins sears the lamb and serves it with a hazelnut demi-glace, made with Frangelico, red wine vinegar, shallots and demi-glace. “The sauce is a play on a gastrique—the hint of sweetness, combined with the acidity of the vinegar, helps cut the richness from the demi-glace and the lamb itself. Chopped hazelnuts offer a textural and visual contrast, as well,” he says. He suggests a few ways to utilize leftover leg of lamb. “Lamb is a versatile protein, and plays well in virtually every way a chef might feature beef as a center-of-plate option,” says Adkins. “Leftovers from a roasted leg of lamb can be incorporated into sandwiches, salads, tacos, soups/stews. It would make a fabulous base for a French dip-style sandwich with rosemary-infused au jus and a dill-and-mint horseradish tzatziki.” 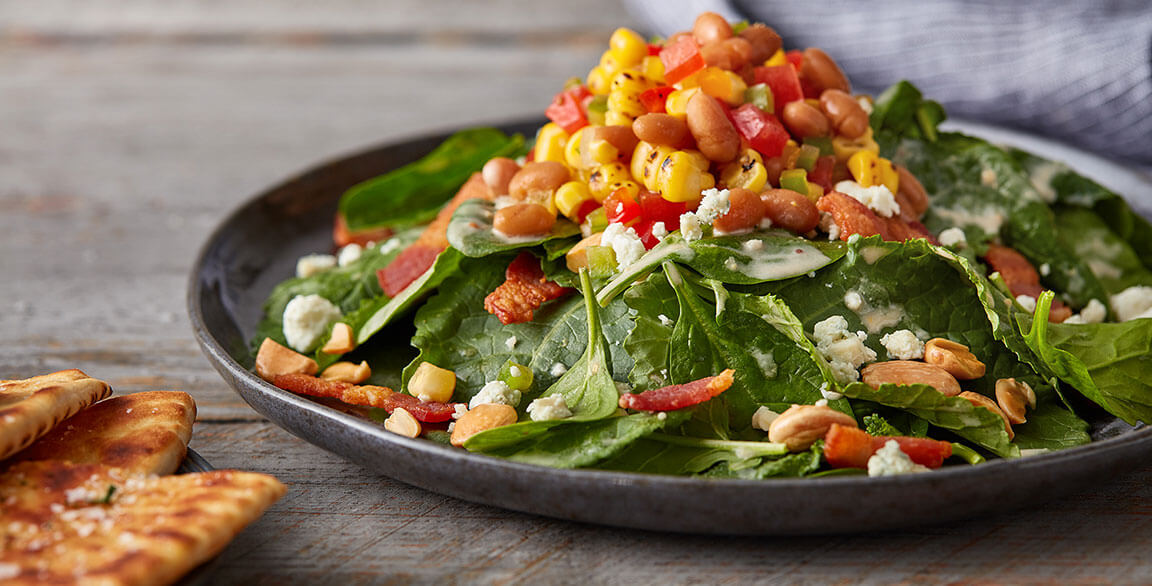 Inspired by baked beans, Adkins’ recipe showcases a play on “Texas caviar” and improves on the classic warm bacon salad dressing. “It occurred to me that most varieties of the dressing that I’ve seen over the years all have the same shortcoming—the dressing doesn’t cling to the spinach leaves, especially when using delicate baby spinach varieties,” he says. “Incorporating the beans into the dressing enhances the body of the dressing and allows it to stay where it belongs—on the salad, not on the bottom of the plate. The beans also impart an additional savory note to the dressing, which contrasts nicely to the richness of the bacon.” The flavors in the Bean and Bacon Dressing are savory and delicious: He combines puréed Bush’s Baked Beans with thick-cut bacon, shallot, red wine vinegar, rendered bacon fat, stone-ground mustard, apple cider and honey.

To build the Spinach and Kale Salad with Baked Bean “Caviar,” he tosses spinach and kale with the hot dressing, mounds it in the center of the plate, topping it with diced bacon, chopped almonds and crumbled bleu goat cheese. Adkins then adds the baked bean “caviar,” a flavorful combination of baked beans, roasted corn, green, yellow and red bell pepper, shallot, heirloom tomato, apple cider vinegar and sazón seasoning. “It offers a nice visual and textural pop to the salad, and the flavor imparts a little more acidity to the overall dish,” he says.