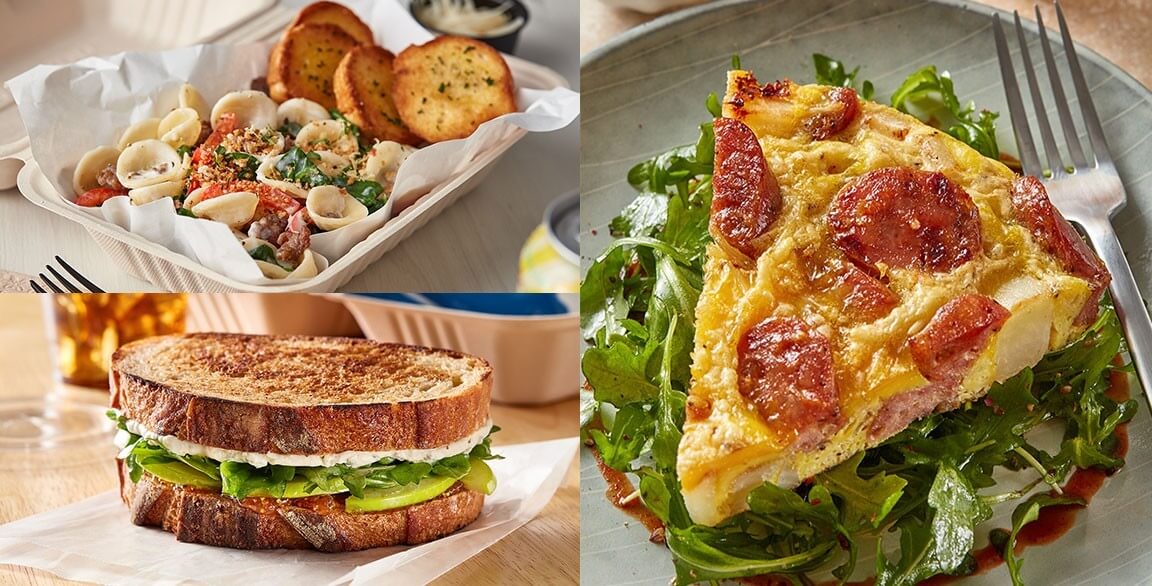 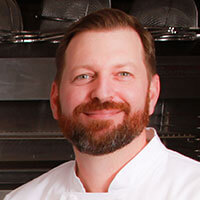 Jeremy Lett’s recipe development for Kitchen Collaborative homed in on the comfort zone while demonstrating a wide scope of field for inspiration. That approach is important, as diners start to look past their favorites for dishes that are a little more adventurous.

As Corporate Executive Chef of Fleming’s Prime Steakhouse & Wine Bar, part of the Tampa Bay, Fla.-based Bloomin’ Brands family of concepts, Lett is well-versed in finding that balance, and it shows in all three recipes.

His Barilla Orecchiette with Sausage and Spinach is tossed in a lemon cream sauce and topped with toasted breadcrumbs, promising both familiar and out of the ordinary. He makes the homey grilled cheese into an elegant toasted sandwich with his Grilled Cheese with Boursin, Apples and Fig Jam, and with small, but impactful flavor moves, Lett’s Tyson Foodservice: Spanish Omelette with Aidells Chicken and Apple Sausage turns the tortilla into a signature brunch item.

Barilla Orecchiette with Sausage and Spinach

Lett goes all in on rustic comfort with his Barilla Orecchiette with Sausage and Spinach. He cooks Italian fennel sausage, then sautés red bell peppers and wilts spinach in the richly flavored rendered fat. He then builds the sauce, adding the sausage, heavy cream, lemon juice, salt and pepper to simmering garlic. Once the orecchiette is cooked, he tosses it in the sauce, along with the bell peppers and spinach, adds Parmesan and cooks the pasta until the cheese melts and the sauce thickens. Lett plates the dish, finishing the creamy pasta with crispy panko breadcrumbs, lemon zest and fresh parsley.

“The sauce has texture to it from the peppers and sausage so I wanted a pasta shape that would stand up to a chunky sauce,” says Lett. “The shape of orecchiette is great for capturing some of the sauce and other ingredients. “Rigatoni or rotini would also pair well with this sauce.” Translating to “little ear” in Italian, orecchiette was named for its shape. Common throughout Italy, it’s a staple in Puglia, often seen in rustic, hearty dishes, thanks to its ability to cradle sauce nicely. 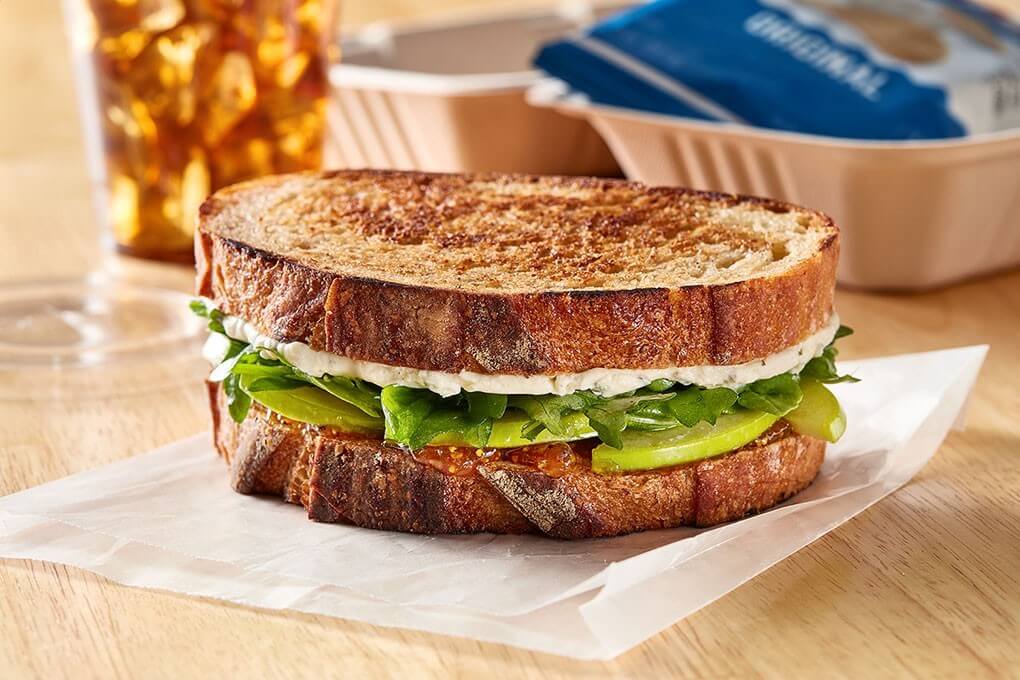 Lett’s Grilled Cheese with Boursin, Apples and Fig Jam successfully brings together an unexpected trio of ingredients. “The Boursin cheese has garlic and herbs, which balance nicely with the sweet and tart flavor in the apples and fig jam,” says Lett. “And Boursin has a nice texture to it—creamy, but slightly crumbly. It works really well with the other ingredients in the dish.”

He first makes the jam, cooking dried Mission figs, lemon juice, sugar and water until the figs soften. He cools the mixture, then blends it and adds black pepper. To make the sandwich, he spreads the jam onto one piece of sourdough, tops it with slices of Granny Smith apple and arugula. On the other slice of bread, Lett spreads the Boursin. He melts butter in a sauté pan, and grills the sandwich until the bread is golden and toasted. 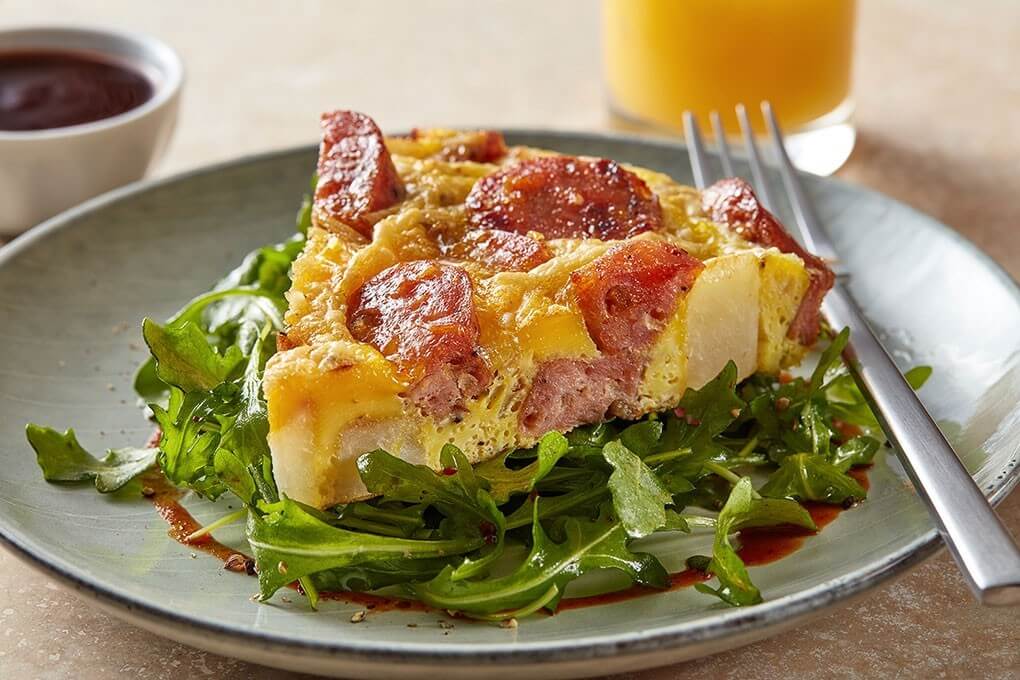 The Spanish tortilla is primed for brunch adaptation. With his Spanish Omelette with Aidells Chicken and Apple Sausage, Lett offers up a great example of how just a few flavor touches takes this Mediterranean classic into modern American directions. “I thought the chicken and apple would be an interesting spin on a classic Spanish dish,” he says. “The chile-maple glaze and bitter arugula add depth to the sweet and savory flavor in the omelette.”

He makes a fairly traditional tortilla, frying onions and potatoes, then incorporates them into a bowl of whisked eggs and lets them sit for 15 minutes. Lett also stirs in sautéed chicken sausage and sun-dried tomato. He then pours the mixture into a skillet, cooks it until it turns golden brown on the bottom, then gently flips it, holding a plate over top and sliding the omelette gently back into the pan to finish cooking. Lett then places a plate over the pan and flips it again and lets it rest. “I like how the chicken and apple in the sausage give a nice balance of sweet and savory,” he says. “It also has a good fat-to-lean ratio that produces a nice mouthfeel and juiciness.” He adds sweet-hot signature flavor with a drizzle of maple-chile glaze, made with Sriracha, maple syrup, sugar and soy sauce.