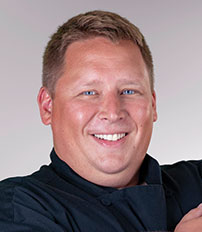 The Chicken ‘N’ Watermelon ‘N’ Waffles is not only the top seller at all of Yardbird’s locations; it’s so good that Patrick Rebholz, Corporate Executive Chef, uses it as a yardstick for every dish at this casual dining concept, where inventive takes on Southern fare is the name of the game. “It’s our highest-performing dish and has set forth a poultry-driven theme throughout the menu,” says Rebholz. Yardbird’s fried chicken gives this dish its competitive edge. It’s brined, dredged, then pressure-fried in pork lard. “We slowly roast the chicken at a low temperature with full pressure to tenderize or almost ‘confit’ the bird,” he says. As it’s finished cooking, the heat is dialed up to release the pressure and crisp the skin. Served on the brunch menu, the fried chicken buddies up to a savory-sweet cheddar-cheese waffle, chilled spiced watermelon and both a honey-hot sauce and a bourbon-maple syrup. “The cheddar gives the waffle that gnarly, caramelized grilled-cheese crust that’s out of this world,” he says.