Indulgent Vegan Vegan fare is moving from functional to decadent, enticing a wider range of consumers 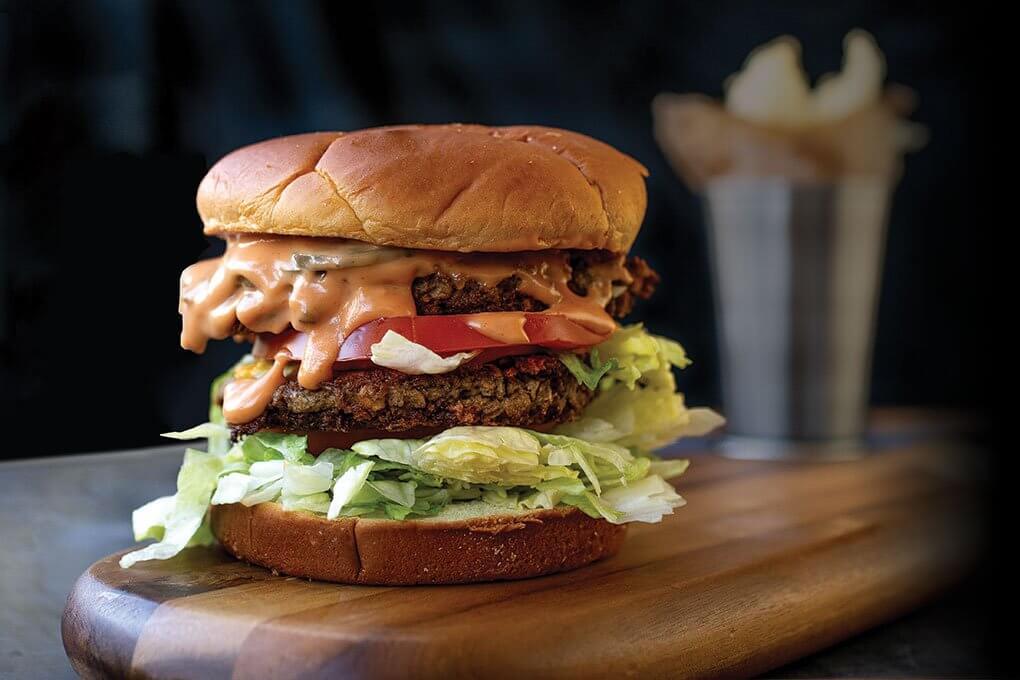 No Bones Beach Club is a modern vegan restaurant and bar geared toward younger consumers in Seattle and Portland, Ore., and now the Chicago market as well. Its vibe is hip, with a laid-back motto that brags: “Just cuz it’s vegan doesn’t mean it sucks!” Menu items tout fan-favorite formats, like wings and nachos.

No Bones’ Buffalo Cauliflower Wings are tossed in a coconut-Buffalo sauce, served with a side of ranch. Its Northwest Nachos star cashew-poblano queso, black bean and corn salsa, tomato, cilantro, grilled jalapeño and cilantro crema, with an add-on of spiced jackfruit carnitas.

And in New York, Cienfuegos is transforming from a rum bar and Latin American restaurant into Honeybee’s, a vegan barbecue-style eatery with a focus on whiskey.

Something fascinating is happening with vegan food in this country. Its positioning is shifting from niche to mainstream. From straight-laced to cool. These new concepts aren’t hanging their hat on healthfulness and righteousness; they’re touting indulgent, craveable menus. They’re leading with a vibe that’s in step with most modern restaurants that are trying to appeal to younger consumers—original, social, flavor-forward food.

“Creating dishes that are appealing, engaging, and craveworthy—that is the holy grail of vegan dishes,” says Maeve Webster, president of Menu Matters consultancy.

“Yes, there is a hard-core group of vegans who want vegan food appreciated for its ethical, moral and environmental implications, but the reality is that most consumers do not order based on those issues. The vast majority of consumers want to order something that looks delicious, and indulgence is one of the primary pathways to deliciousness.”

This comforting vegan mac and cheese, made by chef Scott Perry of Burtons Grill, based in Andover, Mass., stars a rich roasted-cauliflower sauce.

Vegan food is now cool. How did that happen?

First, modern food-product development has yielded an impressive array of items that are finally making vegan fare not just palatable, but delicious.

Second, chefs are reaching further into plant-based recipe development, thanks to the astounding success of the veg-centric movement. “This trend is part and parcel with the focus on plant-based eating,” says Brian Darr, managing director at Datassential. “Product categories are growing, from milk alternatives like nut milks and nut-derived cheeses to meat analogues that mimic the experience of meat—including the indulgent side of it.”

Third—and this cannot be overstated— younger consumers are driving the demand for great-tasting vegan food.

“When you talk about Gen X and Boomers, except for the most food-forward or throwback hippies, vegan doesn’t work well,” says Darr. “But plant-forward? They get that. There’s not a need for education, it’s simply about word choice. When you talk to C&U [college and university] directors, it’s amazing what’s in their consideration set for product.”

Veganism Rising – Competition is intensifying fast in the vegan space.

It’s worth noting that demand for vegan food is also rising because of the makeup of younger generations. “Gen Z is ethnically diverse, with a higher number of Asians, Indians and Middle Easterners,” says Darr. “Eating like this is built into their lifestyle.” That tie to culture and lifestyle makes the desire for vegan food less about calorie count and more about flavor.

A similar phenomenon is mirrored in the veg-centric trend. “The plant-based trend has helped make vegetarian and vegan options better,” says Ian Ramirez, director of culinary innovation and operations for Creative Dining Services. “Chefs are becoming so much more intentional with their design, their flavor building. We used to have vegan options on the menu because we had to have them for the few customers who might order them. Now, we want to have them for a larger consumer base.”

Underpinning all of this opportunity is the fact that no matter how indulgent the vegan fare is, it holds onto its better-for-you status. “You feel good about eating it,” says Darr. “You still feel good even though it’s indulgent. There’s such a halo around plant-based food that it makes up for the calorie count.”

Ordering a vegan dish is no longer a trade-down of experience. If done well, menu development in this category entices all types of diners—flexitarians, vegans, vegetarians and omnivores alike. That’s a big shift from the days of begrudgingly adding a veggie burger to placate the roughly 1 percent of guests who may request it. Today, vegan dishes are starting to stand toe-to-toe with the most craveable menu items, including loaded fries, hot dogs and deli sandwiches.

Just look at the Vegan Chili Cheese Fries at The Moonlighter, a neighborhood bar in Chicago. The fries are topped with housemade vegan chili and a vegan cheese blend, then baked in the oven until the cheese is melted and gooey. The dish is finished with scallions, red onions and vegan sour cream. The build, with layers of indulgent flavor, darn near duplicates the original.

San Francisco-based Curry Up Now, a family of restaurants and food trucks that serves up modern Indian cuisine, offers Hella Vegan Sexy Fries, which are sweet-potato waffle fries topped with signature handmade samosas and chutneys. In addition to serving as a vegan offering, this dish carries an important marker in this trend—its menu name plays up bravado, helping position vegan fare as a hip option.

Of course, exploiting a familiar and well-loved format like loaded fries is a smart way to introduce the glory side of vegan. At Tony’s Darts Away, an eco-minded pub in Burbank, Calif., the Disco Fries are topped with gravy and vegan cheddar shreds, offering a plant-based decadent item that mirrors the poutine experience.

That familiarity is important when moving into vegan territory—especially when developing dishes that tout indulgence. Gabriel Caliendo, VP of food and beverage at Lazy Dog Restaurants, says craveable, flavor-forward vegan fare is a crucial part of modern menu strategy. “I’m excited about this trend. This is absolutely the way to go. It’s really become so widespread—people want to eat meatless on occasion, but they don’t want to sacrifice flavor,” he says. “We’ve been doing fun stuff that you might not even notice has no meat in it.”

Lazy Dog’s Spaghetti and Beetballs are a good example. Spaghetti squash is roasted then shredded and tossed to order with marinara that has been slow cooked. It is topped with crispy beetballs (ancient grains, roasted beets, flaxseed, brown rice, black beans, onion, garlic, herbs). The dish is finished with zucchini ribbons, a housemade walnut pesto and a sprinkle of toasted pumpkin seeds. “It’s a super savory marinara that’s really rich and coats your tongue in a satisfying, meaty way,” says Caliendo.

He recognizes that many dining consumers are still unsure about vegan dishes. “You’re building trust with dishes like this,” he says. “The photography can help get you there. You can almost see the savoriness in the photo.”

Insights on the Vegan Trend – insights into the vegan trend from our panel of experts.

The rise of indulgent vegan stems from the broad appeal of plant-based foods. “Plant-centric proliferation has helped propel an appreciation for vegetarian and vegan options,” says Rob Corliss, chef/founder of the consulting firm All Things Epicurean (ATE). “While vegan, in and of itself, is more of a lifestyle choice as opposed to a cuisine, it has started to entice non-vegans with its ingredient combinations.”

Vegan dogs are in the game, too, unleashing the same level of decadence that we see in baseball parks and street carts across the country.

At Anthem, a Tex-Asian restaurant in Austin, Texas, the Vdog is a house-smoked vegan curry hot dog topped with Korean kraut, scallion, sesame seeds and spicy vegan aïoli on a pretzel bun.

Blatt Beer & Table in Dallas and Omaha, Neb., menus a Vegan Currywurst with all of the traditional currywurst flavors, like smoked paprika, cumin and curry, topped with caraway kraut and German rosemary mustard, served on a pretzel bun.

The house-smoked vegan hot dog at Anthem in Austin, Texas, is loaded with Korean kraut and spicy vegan aïoli.

Flavor complexity, craveability and craftsmanship are the three factors that spell vegan menu development success. “The use of plant-based meat alternatives and healthy fats from produce, such as avocados, are giving plant-forward menu items the taste and texture of the foods that consumers grew up loving, without sacrificing enjoyment,” says CSSI’s Darling.

Butterleaf, a restaurant in Irvine, Calif., that invites guests to “indulge in plant-based cuisine,” menus a mix of healthy and indulgent. Its appetizer of Avocado Bombs plays off the nutrient-rich components of the avocado, then builds up their shareability and craveability by frying them, topping with pepitas, guacamole, kimchi aïoli and vegan mayonnaise.

SAJJ Mediterranean, a family of food trucks and fast-casual restaurants with nine locations in California, offers a chocolate hummus that nicely bridges the gap between indulgence and healthfulness. It’s made with chickpeas, tahini, cocoa powder, chocolate-hazelnut spread, maple syrup and vanilla, and paired with housemade cinnamon sugar-dusted chips.

The success of a vegan chocolate hummus with cinnamon chips, served at SAJJ Mediterranean, signals an embrace of vegan fare in unexpected places.