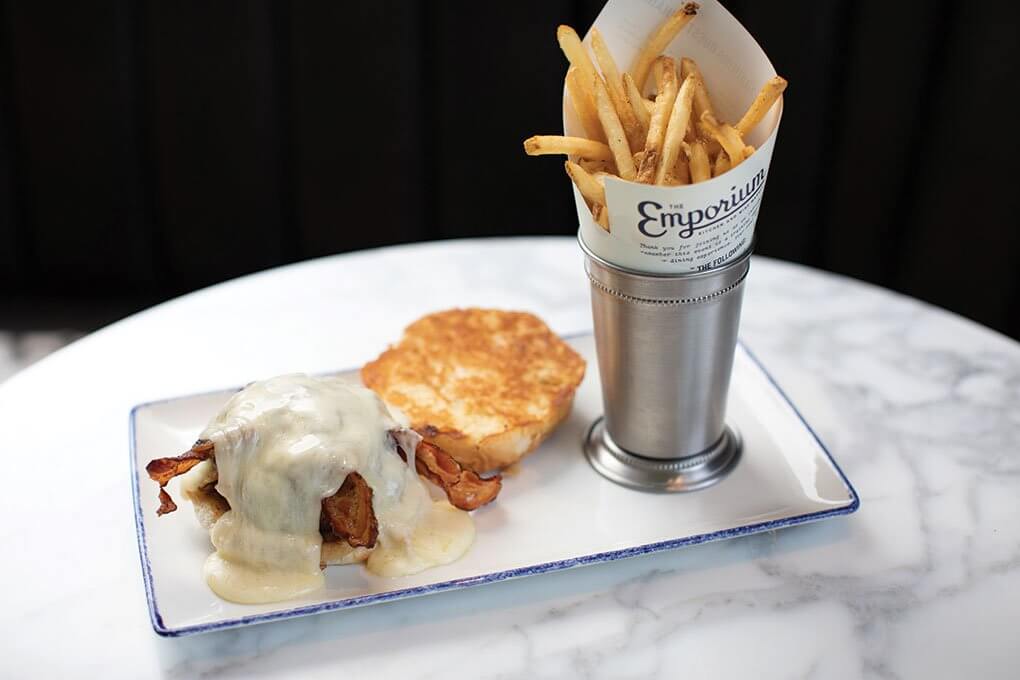 The Tableside Raclette Burger at The Emporium in Savannah, Ga., demonstrates how well French plays on American menus.
PHOTO CREDIT: The Emporium

It’s too much of a stretch to call out French as an emerging cuisine. It’s classic, foundational, fundamental, and as old as medieval castles that dot its countryside. But something exciting is going on with French food in this country.

What’s happening today isn’t a gastronomic revolution. It’s not even an incursion. Instead, it’s a diplomatic exchange. It’s refined, cultured.

It’s on the menu at Bistro Georgette in Denver in its version of fried chicken and waffles. In a sublime move, waffles are replaced with pain perdu, giving it French inflection while staying true to its Southern flavor promise.

It’s the loaded fries on the appetizer menu of Django, a modern brasserie in Des Moines, Iowa. The Duck Frites is served with Béarnaise, harissa aïoli and curry ketchup—a craveable, familiar dish that delivers the famous frites and a classic French sauce while modernizing it with global flavor punches.

So, this diplomatic exchange sees a surge of newly opened restaurants themed around a modern approach to French fare, where chefs are celebrating French dishes and ingredients while adding a playfulness that has become a hallmark of New American cuisine.

French Cuisine Insights – insights into the French cuisine trend from our panel of experts.

At Bistro Georgette in Denver, the pain perdu subs in for waffles in its French version of Southern chicken and waffles.

“Tradition is the foundation we build upon,” says Rob Corliss, chef/founder of the consulting firm All Things Epicurean (ATE). “However, our culinary evolution demands thoughtful modern tweaks to maintain relevancy. Modern bistros and brasseries celebrate the past, yet remove any pretensions and apply an approachable creativity to cuisine. Anytime you can take a classic dish or technique and tweak it with a fun, modern touch that fits your brand, that’s a recipe for success.”

Why now though? What’s driving interest today? Perhaps it’s gaining momentum through a countermovement, balancing the exuberant and expansive exploration of assertive flavors from global hotspots like Southeast Asia, the Middle East and India. French flavors are rich, but not bold. Delicious but not aggressive.

“While we were smitten with cuisines from emerging regions, French chefs were continuously updating their cuisine,” says Ron DeSantis, principal advisor of CulinaryNXT. “What makes French appealing is its legacy. American chefs are perfectly suited to try the untried and not be bound by rules, but still respect the culinary foundations laid down by French cuisine. This dynamic results in new dishes with a familiarity to customers.”

That’s a key driver in this trend—a willingness to take an elegant and revered culinary tradition and apply playful, whimsical innovation. Tinkering with the classics is certainly a continued draw for both the chef and dining consumer, building off of familiar, beloved profiles in surprising and delightful ways.

Culinary Rediscovery – The opportunity here is to focus on local/regional French cuisine as a source of inspiration.

With French cuisine, the opportunity isn’t necessarily about introducing diners to new flavors. Instead, it’s about leveraging comforting, proven classics and spinning them into something thoroughly modern and approachable.

“With French cuisine as the backbone of Western culinary arts, there are always foundational elements that can be updated yet still resonate with diners,” says Kara Nielsen, VP of trends and marketing for CCD Helmsman. “The mother sauces can be seasoned with global herbs and applied to cross-cultural dishes. Doughs can be flavored—and colored—and shaped in new ways to be carriers, wraps or accents. Techniques, such as cooking ‘en confit,’ can be applied to more ingredients, like vegetables, for a modern feel.”

One of the culinary driving forces behind this modern French trend is Jamie Malone, chef/owner of Grand Café, a contemporary French bistro in Minneapolis named as one of the best restaurants of 2018 by Food & Wine, which said the concept “speaks of the past in the language of the present.” Moving modern French cuisine further into the spotlight, the magazine ran Malone’s Paris-Brest on the cover, calling it the best bite of the year.

Her version of this classic pastry exemplifies the trend. She makes a traditional choux pastry, but instead of stuffing it with praline mousseline, she pipes in a rich, creamy chicken liver mousse, cooked with Cognac, garlic, thyme, heavy cream, salt and sugar. She glazes the pastry in burnt honey balanced with apple cider vinegar. Shimmer powder finishes this showstopper, which is served as a $3 bar bite about the size of a ping pong ball. “When I first put it on the menu, I didn’t think it would sell well, but it sold like crazy,” says Malone.

Her strategy with this and other whimsical dishes on her menu is to not stray too far from French technique while adding American creativity. “I love looking at really old French recipes, like veal blanquette and pike mousse. I try to be esoteric and playful while following the guidelines of French cookery,” she says.

Her corn madeleine, an hors d’oeuvre served with whipped brown butter, includes cornmeal and sweet corn purée, moving the classic cookie into a savory starter. “We cut back on the sugar and add the corn, but the technique is traditional,” says Malone.

She asserts French food is a great playground for American chefs. “For so long, it’s felt too fancy and out of style, with an attitude that it can’t be messed with. There’s definitely technique you need to master before you change it, but it’s such a great cuisine to play with,” she says.

Matt Harding, director of culinary and corporate executive chef at Piada Italian Street Food, sees the potential for wider adoption at the chain level. “It’s only a matter of time until chefs who drive quality in comfort food naturally gravitate back to French. It is arguably the cradle of modern Western cuisine,” he says.

“There hasn’t been a mass adoption of French like Italian here. A million chefs aren’t playing in the sandbox, so they haven’t broken it yet. There’s so much potential today with French.”

Examples of updated, approachable, French-inspired food abound. Dirty French in New York describes itself as a “restaurant that takes its culinary cues from the timeless dishes and preparations of the classic French bistro and enlivens them with bold flavors of the world.”

Its play on mille-feuille, that classic French dessert that sees layers of whisper-thin puff pastry separated by sweet cream filling, replaces the pastry with mushrooms grilled over charcoal. “The mille-feuille is made from thinly sliced trumpet royal mushrooms, layered together, roasted, pressed and chilled, then sliced and seared on each edge,” says Jordan Terry, executive chef. “It takes the classic French techniques and lightens them by using all mushrooms. We serve it with a bright curry sauce that changes throughout the year. Right now it’s red curry with butternut squash. At Dirty French, we always start with the classics that we love and think about how to lighten them using the flavors of other regions that French cooking has influenced—Louisiana, Vietnam, North Africa and so on.”

Django in Des Moines menus a Burger au Poivre with Gruyère and brandy peppercorn sauce, cleverly taking a classic French steak preparation and making it more casual and approachable in a burger format.

And The Emporium Kitchen & Wine Market in Savannah, Ga., an American brasserie with Southern influences, serves a Raclette Burger, made with beef, bacon, caramelized onions and melted raclette, served tableside.

CCD Helmsman’s Nielsen sees burgers as a fantastic way into this trend. “French accents in and on top of burgers can take the form into new territories for diners to explore,” she says. “How can salty French butters play a role on a meat patty or even a bun? Is there a place for duck or duck fat in a premium build? French wine melded with caramelized onions, shallots or leeks makes for an elegant and flavorful garnish.”

Bar snacks and appetizers are another part of the menu that practically calls out to French fare for inspiration, as showcased in Grand Cafe’s wildly successful Paris-Brest.

“We researched what the classic dish was, how it ate for one, then thought it could be an easy, fun, shareable item that could really ‘Wow!’ at the start of the meal,” says Mike Sheerin, executive chef. “I really wanted it to stay understandable and approachable.”

Salut Bar Américain, a modern French bistro with two locations in Minnesota, showcases an easy pathway to French-inspired table snacks with its French baguette and whipped butter and its Pommes Frites with Béarnaise sauce.

Income Tax in Chicago menus a Roasted Half Chicken, giving a nod to the Provençal classic dish while updating it with creative touches. It’s roasted at a low temperature, then roasted again, over onion confit, brushed with fermented honey infused with smoked garlic and sprinkled with herbs de Provence. For service, a bouquet garni made of lavender stems, rosemary, winter savory, thyme and oregano is torched, adding a bit of theater to the homey roast chicken.

“The runway is so long with this opportunity,” says Piada’s Harding. “Chefs can dip into bistro cuisine—moules-frites, duck confit—and change the flavors to give it a modern spin. Bring in emerging flavors into French cuisine—make a turmeric aïoli for frites, for example. People know the cuisine; they trust it.”

French cuisine has been a standard-bearer and a foundation for so long. Thanks to a few significant drivers, it’s ready to bend and twist into the exciting new world of modern American cuisine.