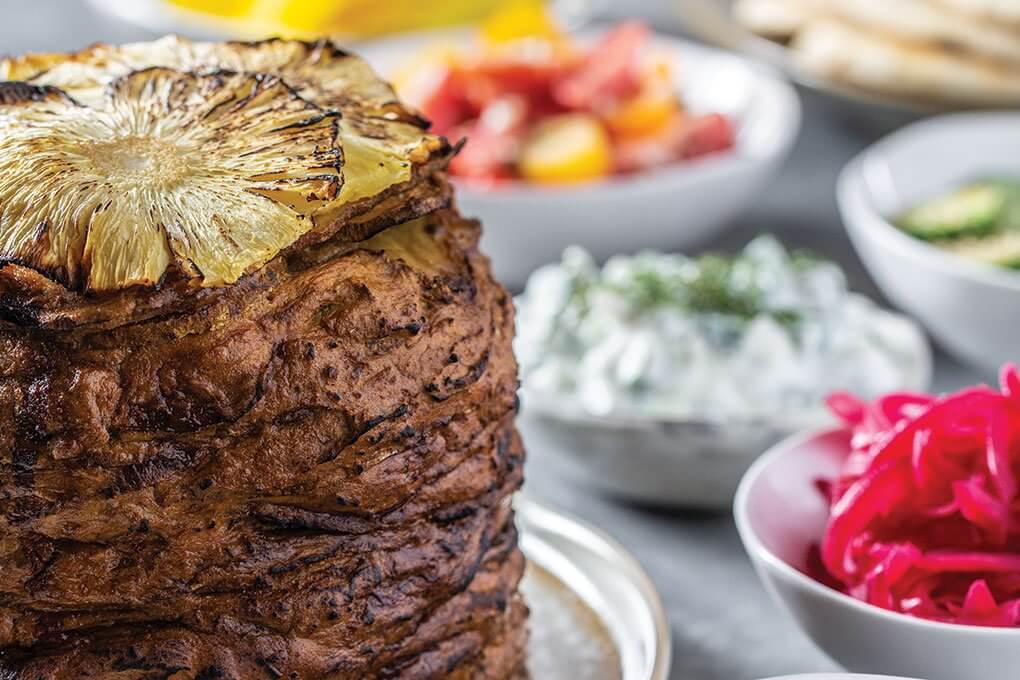 Shawarma, that flavor-rich meat cooked on a spit, has made big moves on American menus.

Chef RJ Harvey, global foodservice marketing manager with Potatoes USA, saw a plant-centric version on the menu at Noma in Copenhagen, Denmark, starring celery root and truffles. “This innovative dish inspired me to create a more accessible version using potatoes,” he says. “Instead of truffles, we opted for traditional Middle Eastern spices.”

Apart from the primed-for-Instagram appeal of a potato shawarma, it taps into another giant movement in this country: plant-forward dining. “We are no longer defining dishes as vegetarian,” says Harvey. “We are simply making delicious food, using our talent as chefs and featuring them in a way that is craveable.”

This recipe sees a tower of marinated Russet potato slices that have been dipped in an aggressively seasoned mashed potato and egg mixture, which works to bind the potatoes into a shawarma-like cone. It’s vertically sandwiched between two generous slices of pineapple and roasted. “As the shawarma roasts, the pineapple drips its juices into the potatoes, adding sweetness and dimension,” says Harvey.

Get the recipe for Roasted Lebanese Potato Shawarma

This showstopper was originally designed for a carving station or a pop-up restaurant, but Harvey points out its versatility: “It can be arranged on a share plate, or used in a slider on mini flatbread, or as a base for grilled lamb with tzatziki and pickled vegetables.”

Part of the growth in plant-based culinary innovations resulting in cutting-edge builds like this is consumers’ desire for cleaner and healthier eating. Thanks to potatoes as the central feature, the nutritional profile of this shawarma build is rich in potassium, complex carbohydrates and fiber.

Combined with the functional benefits of the traditional spices—turmeric, clove, fenugreek and cinnamon—this potato-based take on the shawarma can boast better-for-you benefits—as well as showstopping creativity.