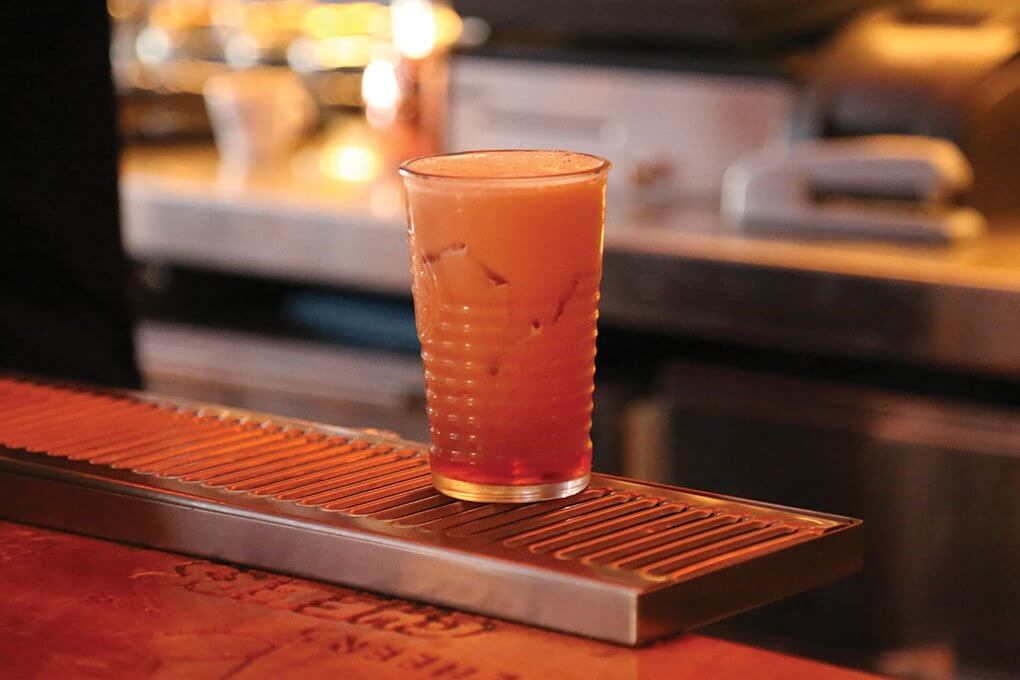 Not exactly the usual, the on-tap Nitro Negroni at Quality Eats in New York adds a hit of nitrogen for a creamy textural twist to the classic cocktail.
PHOTO CREDIT: Brian Masilionis

Innovation continues to be the key to differentiation for any full-service restaurant or bar. The challenge is keeping up with the pace of an ever-demanding customer who, through Instagram and other social platforms, is exposed to more cocktail varieties than ever before. In order to identify what is being done to drive appeal and sales of cocktails at trend-forward concepts, Southern Glazer’s Wine & Spirits, an alcoholic beverage distribution and consulting firm, set out on its second-annual fact-finding tour.

Working with the company’s mixologists, the team identified more than 160 full-service locations that fit certain criteria: restaurants with strong beverage programs; bars that menu innovative cocktails; and bars with a focus on food. New locations were evaluated, as well as those that have remained relevant over time. Once identified, the innovation team visited 80 locations, ordering close to 400 cocktails.

While many of the trends and flavors from last year’s research are still relevant, the standout discovery this year is the creative and sophisticated use of high-impact ingredients that introduce unique profiles to classic cocktails. Based on our research, here are four key opportunities in the cocktail category.

1. Bitters at the forefront

Historically featured as after-dinner drinks or as accent flavors, amari and bitters continue to proliferate on drink menus across the country. Their increased popularity stems from their ability to tone down drinks that are too tart or too sweet by adding a bitterness that helps bring these flavors back into balance.

One of the mostly broadly used amari is Aperol—a bitter orange liqueur that not only adds astringency and bitterness, but also a wonderful color. The most well known iteration is the Aperol spritz, a gorgeous, refreshing aperitif, but bartenders are also leveraging it in other creative ways.

Gilt Bar in Chicago employs Aperol for a twist on its classic 1800s-era Daisy cocktail, which is traditionally a base spirit, simple syrup, maraschino, lemon and soda. In its version, the Vodka Daisy cocktail combines Nuit Blanche Vodka with Aperol, St-Germain elderflower liqueur and lemon.

The classic Negroni is widely promoted across all markets, serving as ambassador for bitter cocktails. At Quality Eats in New York, this simple, bitter and on-trend cocktail is transformed into the Nitro Negroni by putting it on tap with nitrogen bubbles, adding a soft, creamy texture and great presentation.

Amaro Nonino is another amaro making waves. This one is grappa-based and infused with herbs, roots and spices. Bolsa in Dallas incorporates it into a tropical twist on a rye Manhattan: the Texas Heat Wave. The drink infuses Bulleit Rye with banana (a process seen in multiple markets), Amaro Nonino, passionfruit, habanero and lemon zest.

Fernet-Branca, an amaro hailing from Milan, uses a proprietary blend of 27 herbs, roots and spices. BlackTail in New York offers a uniquely flavored deconstructed rum and cola. Its version mixes Bahamian rum with Fernet-Branca, cola syrup and aromatic bitters, topped with brut Champagne. The resulting cocktail carries the key flavor components of the classic drink, but is much less sticky-sweet and more complex and refreshing.

Angostura bitters, historically relegated to an accent ingredient, is making its way to the forefront in cocktails. At The Chestnut Club in Santa Monica, Calif., a Trinidad Sour’s predominant ingredient is Angostura bitters, followed in smaller proportions by Rittenhouse 100 Rye, orgeat and lemon juice.

The Texas Heat Wave (left) at Bolsa in Dallas brings a tropical twist to a rye Manhattan; vermouth and Angostura flip the emphasis in the Reverse Manhattan (center) served at Rye in Kansas City, Mo.; Chicago’s Gilt Bar gives its Vodka Daisy a refreshingly bitter edge and compelling color by using Aperol, along with vodka, St-Germain and lemon.

While bitters can assist in cutting the sweetness of cocktails, a wide range of wines can add a softer sweetness than syrups. These include: fortified wines like ports and vermouths; subtle nutty or creamy sherries; crisp and clean red and white wines; and sparkling wines for bubbly texture. These ingredients lend themselves well to cocktail development, as well as reduce the need to add excessive amounts of alcohol that can make a drink too boozy.

Sherry is another fortified wine that can add a subtle nutty flavor to cocktails, as seen in the classic Tiki-style Fogcutter cocktail at The Grill in New York, which mixes rum, Cognac, gin, orgeat, almond syrup and sherry.

But sherry is not just for Tiki cocktails, as demonstrated at Parliament in Dallas, where the Just Friends cocktail with Plymouth Gin, amontillado sherry and orange bitters is served in a glass spritzed with sunflower oil and rolled in cracked pepper for visual impact as well as a nice spice zing on the palate.

When it comes to unfortified and sparkling wines imparting crisp and clean flavors, one example is the Aguas de Marco at Untitled Supper Club in Chicago. It improvises on a gin martini, with Plymouth Gin, New Zealand Sauvignon blanc, Cocchi Rosa, Velvet Falernum and rosehip bitters. The Sauvignon blanc, which has inherent grassy flavors, helps pull out the herbal notes while mellowing the alcohol punch of the gin.

Sherry introduces a nutty element to the Fogcutter (left) at The Grill in New York; at Rye in Kansas City, Mo., aromatized wine and bubbles enliven the Charron G&T (center); and the Just Friends cocktail (right) at Parliament in Dallas adds interest with amontillado sherry—plus the glass is rolled in black pepper.

A big offshoot of the veg-centric movement is the garden-to-glass trend in cocktail design, where produce like cucumbers, celery, peppers and peas become the heroes of a drink. Another way in to veg-centricity is through the use of spirits that have vegetal characteristics, such as Green Chartreuse, a 110-proof neutral grain spirit aged with 130 herbs, flowers and plants, or its milder, slightly sweeter, lower-alcohol cousin, Yellow Chartreuse. Incorporating vegetables and vegetal spirit ingredients adds fresh, bright flavors and sometimes, as with peppers, beets and peas, can impart a unique, vibrant color.

Quality Eats in New York demonstrates a simple and refreshing use of cucumber in its Key Money cocktail, infusing strawberries with Tanqueray gin and muddling it with mint and lime—similar to a gin twist on a mojito. This drink stars large ice cubes made with cucumber juice and water. When the ice melts, the flavor of the drink slowly takes on more cucumber flavor.

Westlight in The William Vale hotel in Brooklyn, N.Y., leverages celery in its Giddy Up cocktail, a refreshing translation of a gin and tonic. The drink combines celery juice with gin, Yellow Chartreuse, fresh ginger, lemon and tonic. One of the top-selling cocktails at Wheelhouse in Dallas is the Pepper Smash, where red bell pepper is juiced and mixed with gin, fresh lemon, honey and mint—the last three ingredients are typical for a smash cocktail.

Beets have been featured much more in 2018, compared to last year. Not only do beets offer a subtle, sweet flavor, they add a wonderful color regardless of whether they’re juiced or infused into spirits, which readily absorb color and flavor. HG Sply Co. in Dallas incorporates red beets in its Double Under cocktail by infusing Lunazul tequila with beets and mixing it into a traditional margarita combined with Cointreau, rosemary turbinado, simple syrup, lime and salt.

Coffee and tea as ingredients have become so popular that entire concepts have opened this year around them, such as Rudolph’s Bar & Tea at the new Freehand Hotel, and The Coffee Bar at The NoMad hotel, both in Los Angeles. There’s also a deeper exploration of coffee and tea across the cocktail landscape, leveraged for their smoothness, earthiness, subtle smokiness or other flavor tones—all with a nice backbone to stand up to more assertive spirits.

With the explosion of cold brew at coffee shops and grocery stores across America, it should be no surprise that this versatile ingredient is being used a lot more in cocktails this year. In Kansas City, Mo., the Buzz Word cocktail at Rye features Buffalo Trace bourbon, banana, Caffè Amaro, Rye KC cold brew, milk and sugar. The double hit of coffee flavor and subtle bitterness from the cold brew and a coffee-flavored amaro balances the creamy sweetness from the milk and sugar.

The Coffee & Donuts cocktail at Rudolph’s Bar & Tea in Los Angeles pairs Jameson Caskmates IPA with pot-still cold-brew coffee, as well as its housemade doughnut cordial and Miracle Mile Redeye Bitters. The drink is then playfully served in a French-press pitcher.

While cold brew primarily delivers a singular flavor profile, the wide array of teas from around the world offers versatility and nuanced flavor. These flavors range from the subtle and delicate aromas of white tea; slight bitterness of many black teas (or subtle smokiness of Lapsang souchong); roasty notes from green teas like houjicha, or soft, grassy flavors in matcha tea; or the range of flavors and aromas of oolong tea. Then there’s the incredibly diverse flavors extracted from herbal and floral teas like hibiscus or chamomile.

Apart from flavor, another advantage to featuring tea is the variety of functional benefits that can help cast a health halo on a cocktail. Tiny Victories in Dallas highlights tea in its riff on a Paloma—the Bidi Bidi Bom Bom features Espolòn tequila, grapefruit, lime, housemade hibiscus syrup and Topo Chico.

At The Breslin Bar & Dining Room in the Ace Hotel in New York, the vermouth is infused with a combination of herbal teas in the Come As You Are cocktail, mixing Pig’s Nose Scotch, apricot and lemongrass-infused Dolin Blanc, orgeat and lemon juice.

Kombucha, a fermented tea, is being used in cocktails more often, as evidenced in the HG Mule from HG Sply Co. in Dallas, with 42 Below vodka, agave, lime and Buddha’s Brew ginger kombucha.

Guest expectation and desire for more complex and layered flavors in cocktails continue to grow year after year. Consumers want to be surprised and delighted, but within a comfortable framework. It explains why so many concepts on this trends tour start with a classic cocktail as a base, but then utilize an ever-expanding range of ingredients to make the drink more interesting.

This differentiation drives appeal, boosts incremental orders and develops loyal customers. Operators can take the first step by starting with a familiar drink that fits the concept and experimenting with some of the ingredients used by trend-forward restaurants. The results can keep a beverage program on the leading edge of cocktail trends.