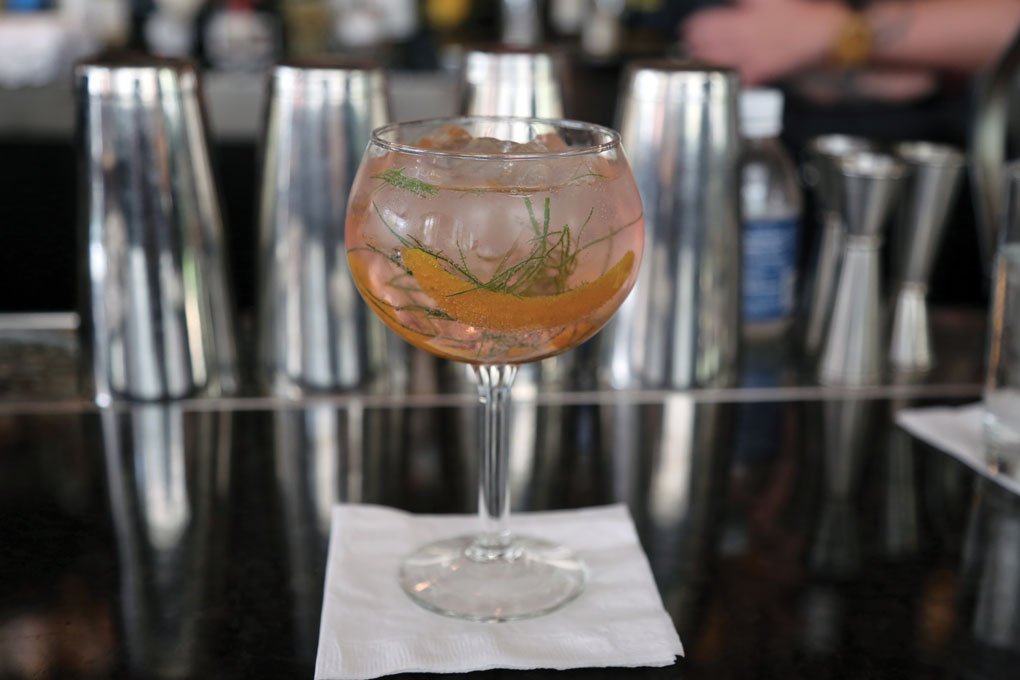 New takes on the gin and tonic are showing up on more menus, like this Spanish-Style Gin & Tonic at Sable in Chicago, with hibiscus, fennel, cinnamon and orange peel.
PHOTO CREDIT: Brian Masilionis

For today’s bars and restaurants, competitive and operational cost pressures continue to intensify, so building a strong beverage program has never been more important to stay competitive and improve profitability. The question is: What can be done to differentiate and drive appeal and sales?

Southern Glazer’s research identified more than 150 full-service locations that fit the following criteria: bars that feature innovative cocktails, with beverages representing a majority of their sales; restaurants where dining is the primary focus, but feature high-quality cocktails and wines; and bars that are a destination for both drinks and food.

The team identified five overarching trends driving today’s successful beverage menus. One significant finding that links these trends together is that while sweet is still relevant, a variety of ingredients and flavors are being used to reduce lingering sweetness, so that guests will not stop at one drink, but have the desire for a second.

In addition, the classic cocktail trend continues; however, intriguing, creative and unexpected ingredients and flavors are being used to keep the profiles fresh and compelling.

Veg-centricity continues to influence culinary development, and, similarly, bartenders are translating this trend in modern cocktails. Americans now consume vegetable juices more and more, either by home-juicing or purchasing juice blends at both retail stores and growing juicery concepts—so their palates are primed to enjoy that same fresh and crisp flavor of produce in cocktails well beyond tomato juice and vegetable garnishes in a Bloody Mary.

This has ushered in a new era of veg-centricity in cocktail development. To translate this trend, a good place to start is with three ingredients seen in each market visited, which shows that their use isn’t isolated to just one market or one concept.

Our research found snap peas—naturally sweet with crisp, bright flavor and vibrant green color—used in cocktails in different ways. Bartenders are muddling snap peas, or blending and straining them for juice as a preparation step at the bar. The flavor is light and refreshing and complements a variety of light spirits like vodka, gin and light rum, as well as tart citrus fruits like lemon and lime.

One of the most loved vegetables in America, the carrot is also being utilized more in beverages. Bartenders are leveraging this root vegetable, which carries a strong health halo and provides a subtle sweetness to drinks. They’re also using carrots to blur the line between vegetable and fruit juices.

Mace in New York does this in its Ginger cocktail by adding citric and malic acid to carrot juice to create carrot acid—which tastes like carrot but is tart like lemon juice—standing up nicely to the drink’s other components of rich and sweet marshmallow-washed bourbon, ginger maple syrup and cider.

The yellow pepper is the sweetest variety, offering great flavor and bright color. It’s also versatile, with a strong flavor profile that can stand up to spirits like tequila and mezcal.

The next-level garden-to-glass trend opens new doors when looking for additional flavor (and color) options using existing pantry items. It also dials up freshness cues. Bars and restaurants should look at their current produce inventory through this lens to provide additional options with cocktails.

Consumers have shown growing interest in bitter flavors, as evidenced by the embrace of hoppy craft beers, Negronis and intense coffee drinks. However, in cocktails, bitter is most often used as a complementary flavor profile to cut the sweetness of added cane sugar, agave, honey, sweet fruits, wines and aged rums.

Historically a pre-meal palate cleanser, a variety of apéritifs are now being used as bittering accents in anytime cocktails. The ingredients most often employed to accomplish this are Italian amari liqueurs like Aperol, Campari and Fernet Branca that use different herbs and spices, as well as Cynar, which adds subtle vegetal notes, with one of its ingredients being artichokes.

In addition to amari, our research showed broad use of wine-based vermouths and dry sherries, which provide complex flavors that also lend a counter-balance to sweet ingredients.

ABV in San Francisco incorporates this approach in its Casa Bonita, a twist on a margarita using blanco tequila, lime, agave, Campari and soda.

Different varieties of tea provide complex flavor and subtle bitterness through tannins or even color.

Oolong is another tea that works as a modern counterpoint to sweet, with smooth flavors of roasted nut and dark fruit, and richer body than most black teas. A good example was seen at Bellota in San Francisco in its Vale, Guay cocktail that mixes Scotch, strawberry, oolong, lemon, fino sherry and egg white. Oolong is not only in the drink but dusted atop the egg white foam.

As cold-brewed coffee has gained broader acceptance, so too have cocktails incorporating this ingredient.

Proxi in Chicago serves a European in the Tropics cocktail using a coffee ice cube with in-house toasted-coconut-infused gin, Campari and Carpano Antica that changes in flavor as the ice melts.

Sweet drinks in the mainstream are not going away anytime soon. However, it is clear from the street-level research that there is a drive to provide less-sweet, more nuanced options. Bitter flavors as accents instead of the lead flavor may appeal more to the masses.

For instance, Bad Hunter infuses flash-frozen strawberries with Cappelletti and Campari to create a unique syrup used in their most popular cocktail, the Low & Sloe Cosmo. It offers guests intense strawberry flavor and color while balancing sweet and bitter elements in the cocktail.

We’ve all witnessed the explosion of global flavors on foodservice menus today. Propelled by a curious and adventurous consumer, that exploration has taken root at the bar, too. Beverage development is looking to far-flung places, raiding their spice racks in creative, flavor-forward ways.

The Middle East is currently a hotbed of culinary exploration, with chefs maximizing the region’s bold, complex flavors on New American menus. Bartenders are finding flavor inspiration here, too, evidenced throughout this research across the country.

Hearth in New York uses cardamom on the rim of its tequila-based Nombre de Plum by blending it with sugar and dehydrated lime zest.

Interest in Southeast Asian flavors can be attributed to consumers’ desire for bolder, spicy flavors with a fresh, compelling profile, as well as a growing Asian population in this country. Familiarity with and affinity for items and ingredients like banh mi and Sriracha continue to grow. It makes sense that Southeast Asian flavors are now being incorporated more in forward-thinking cocktails.

While ginger has gone mainstream, thanks to drinks like the Moscow Mule, ginger root is now used in cocktails like the Whiskey (Sweet &) Sour at Accomplice in Los Angeles, which stars bourbon, ginger, sesame, amaretto and egg white.

Nutmeg is also being grated as an accent flavor for strong aroma, as seen at Saint Lou’s Assembly in Chicago in its Porch Punch made with rye whiskey, Darjeeling tea, cardamom and oleo-saccharum (a citrus-peel syrup), plus lemon-peel-infused sugar.

Food menus are incorporating new spices in familiar ways. Bartenders are turning to spices for the same reasons, and they’re expanding horizons with both exotic picks and creative applications.

While adding mezcal and pre-smoking glasses are still ways for bartenders to add smoky aromatics, it can often be hard to control the level of aroma and intensity through this approach alone. The research revealed a wider use of several ingredients that offer the mixologist more control when adding smoky aromatics and flavors to cocktails

Scotches offer a wide range of smokiness. The Not So Wee at The Drifter in Chicago uses Scotch instead of bourbon in a sour as a smoky component, while chamomile, lemon, honey and smoked sea salt add subtle smoke and salinity to accent the citrus notes. Mixologists are also turning to peaty Scotch sprayed from atomizers to prime glasses so that guests get the smoke aroma without the intense flavor.

Lapsang souchong, a smoked black tea, is used in a variety of locations across the four cities. This tea is traditionally smoke-dried over pinewood fires, imparting a rich, long-finish smoky flavor. One of the top-selling cocktails at The Treasury in San Francisco is the Smoke & Mirrors, which combines gin, pineapple, Lapsang souchong and bitters—the combination achieves a fine balance between pleasing aroma and citrus flavor.

Both Scotch and tea, because of their broad recognition among consumers, offer good opportunity to be used in new ways to leverage their familiar profiles. Also, using “splits” in cocktails has become more prevalent to demonstrate that the drink is greater than the sum of its parts.

A split uses similar, complementary lead spirits in equal proportions. During the research, this was seen in particular with tequila and mezcal combinations, as well as mixing different styles of rums, gins and bourbons with Scotch or rye. Consider bridging these flavors by mixing and matching in familiar cocktails for a new take. Consumers will also see more value in a cocktail if they recognize more liquor brands or types of spirits in a drink.

In response to guests’ desire for lighter cocktails, along with the continued push for visually interesting builds, bartenders are reimagining classic cocktails in new and unique ways, using foams and bubbles to great effect. This tactic is yet another way to cleanse the palate when used with other sweet or herbal ingredients—and offer less-sweet cocktail options on a menu.

This research unearthed a number of cocktails that riffed on the classic gin and tonic. Dead Rabbit in New York serves the Gallus Mug made with Tanqueray gin, Fentimans tonic, lime and Dead Rabbit Orinoco bitters.

Aquafaba, the liquid in canned beans and legumes, is relatively new at the bar, and offers a great vegan substitute for egg white foam. Rooh in San Francisco uses it in its Delhi 6 cocktail with Wild Turkey, rose shrub, elderflower and citrus to create soft herbal notes with a thick foam.

Club soda and flavored sparkling water are also being used well as they provide not only lightness, but also foam. For instance, at Big Bar in Los Angeles, soda is used primarily for its frothing action in the Do You Like Piña Colada? cocktail, where it’s mixed with pineapple juice and cream to create a foamy top.

Beyond just flavor, these bubbly ingredients can provide the visual impact that can take a great cocktail to the next level and drive more orders.

Guests are exploring flavor more than ever, both in food and in beverage. They want drinks they wouldn’t otherwise make at home, but they still look for familiar profiles. They want to be surprised and delighted, but within a comfortable framework. To gain incremental drink orders and stand out from the competition, restaurants should consider where they can incorporate modern, less-sweet elements that showcase both uniqueness and craveability.