Flavor ROI: Down to Earth A case study of King + Duke’s foray into veg-forward flavors 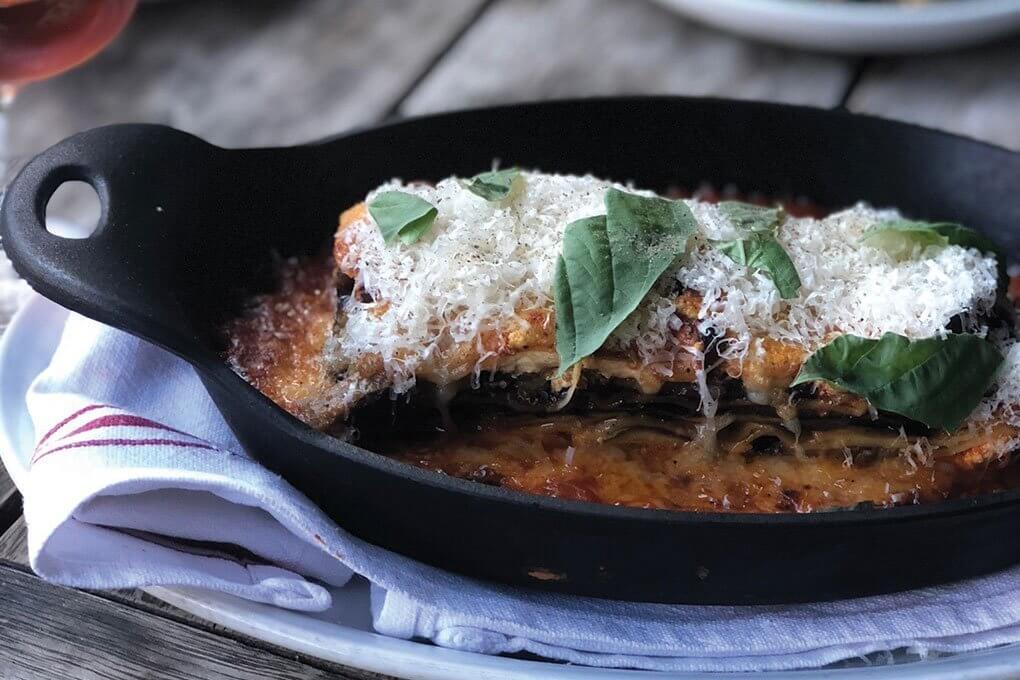 King + Duke in Atlanta features a Hearth Baked Lasagna that gets its meaty flavor from a combination of umami-rich miso and mushrooms.
PHOTO CREDIT: King + Duke

Chef E.J. Hodgkinson knows how to coax out flavor. His menu at King + Duke in Atlanta, where open-hearth cooking is the order of the day, features a starter of Georgia peaches with peanuts, Serrano chiles and Thai basil. His Grilled Swordfish combines confit potatoes, olives and salsa verde.

“I’ve been in this business for more than 20 years—from fine-dining kitchens to the graveyard shift at Denny’s,” says Hodgkinson, executive chef of this modern, seasonal restaurant, part of the Ford Fry Restaurants group. “What I know for sure is that flavor always needs to come first.”

Hodgkinson spent the last year exploring menu development centered around the red-hot veg-centric trend. “I wanted to put something on the menu that was veg-forward and still craveable—no trade down for our guests.”

He landed on a magical combination of mushrooms and miso, using it in a starring role in the restaurant’s Hearth Baked Lasagna. Hodgkinson grinds a combination of shiitake, hen-of-the-woods and cremini mushrooms that have been roasted aggressively. “I then treat them like a Bolognese, making sure we get a lot of umami going for that satisfying flavor appeal,” he says.

To build out the lasagna, he uses pasta sheets, ricotta, Gruyère, fontina and Parmesan. And he uses that mushroom magic in other parts of his menu, exploiting their savory, meaty flavor.

One of the ways E.J. Hodgkinson leverages the mushroom is in his “blended burger” special on King + Duke’s lunch menu, combining ground beef and mushrooms in a way that doesn’t diminish the burger’s beefy promise. Taking his love of what mushrooms can bring to a dish, along with staying in line with the menu’s sensibility of modern American cuisine served in creative ways, he developed his Grilled Cheese Sandwich. The cheese combination used here is the same as what’s featured in the lasagna: Gruyère, fontina and Parmesan.

“When we consider flavor building, and how we’re going to make an investment in what makes something craveable, we thought about what we love about cheese—it should be a little funky, gooey and nutty,” says Hodgkinson. “We want that great flavor with that Instagrammable look of stretched cheese when you take a bite or pull it apart.”

For the sandwich, he uses that trio of cheeses, and once again relies on mushrooms for the savory, meaty element. He makes a mushroom preserve of cremini mushrooms cooked down with sherry vinegar, brown sugar, thyme, garlic and shallots. “You get that great sweet-and-sour flavor going, which plays nicely against the rich cheeses,” he says.

The sandwich is served on a semolina Pullman loaf, which he describes as similar to Texas toast, but with better texture. In both the lasagna and the grilled cheese, Hodgkinson focused on developing big, unexpected flavors.

And once he achieved that desired level of craveability, he looked at other ways he could exploit it on the menu—reinventing it just enough so that each dish promises a new flavor adventure.