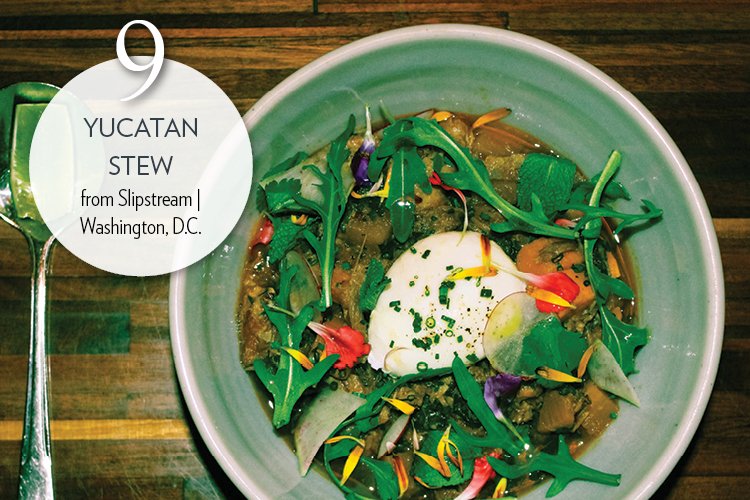 The brunch menu at Slipstream, a concept that serves pour-over coffee by day and cocktails by night, with light fare throughout, puts forth an unconventional offering: Yucatan Stew. The hearty, comforting dish was inspired by a Central American javelina stew—not something familiar to most diners.

Javelinas are pig-like mammals found mostly in Central and South America, so the meat resembles pork. Executive Chef Wille Harner chose to go with pork for his adaptation of the javelina stew that he credits to blogger and cook, Hank Shaw. Harner also subs in sweet potatoes and rutabaga for the original plantains.

“The dish really comes together by creating a rich, deep, full-bodied sofrito of roasted onions, garlic and tomatoes. The starchy vegetables naturally thicken the stew, and a couple splashes of red wine vinegar help to move the entire dish forward,” says Harner. “I can’t stress enough how important layering flavors, reducing liquids and roasting meats properly are to the depth of the dish.” He says the flavors marry and improve in the day or two after cooking.

For brunch, Harner tops the stew with a poached egg and a small salad of Easter egg and watermelon radishes, arugula and cilantro. “I recently added mint, which gives sharp contrast that stands up to the bold flavors of the stew,” he says.

While the dish is served with sourdough toast, Harner says it would also go well over white or brown rice—or a hearty grain such as farro or barley.

Harner knew he struck the right note with the stew when a diner who was originally from Bolivia said the dish reminded him of home. “The ultimate compliment is when a dish delivers a nostalgic response.”