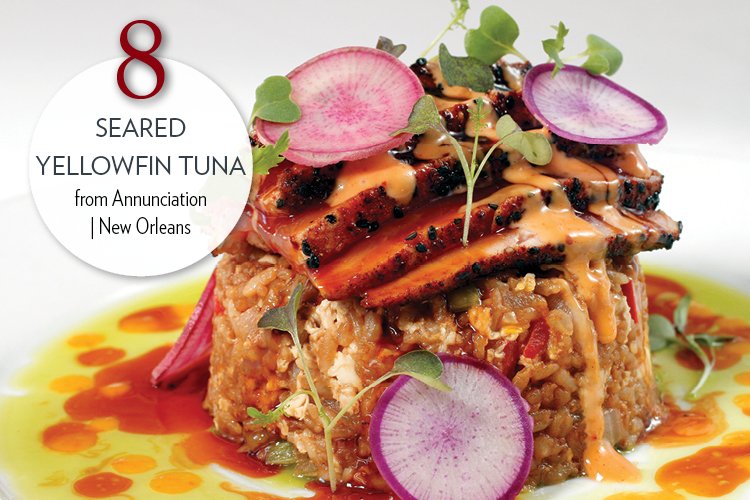 Seven sauces in one dish evoking three different cultures—and it all comes together in a vibrant, flavorful package. “This is a combination of Chinese, Japanese and Creole cuisines,” says Jacob Cureton, Executive Chef at Annunciation, a modern Creole and Southern-themed restaurant.

He was explaining the origins of his Seared Yellowfin Tuna with Creole fried black rice, sweet potato-habanero sauce and signature “Steel sauce” (half Steen’s gastrique and half eel sauce). “The dish is warm, cool, salty, sweet, spicy, meaty, light, crunchy and tender. I wanted it to hit a bunch of brain receptors while eating it.”

Cureton tells the story of how he traveled to China a couple of years ago and discovered “a little bottle of black liquid” on every table. What he thought was soy sauce turned out to be fermented black rice vinegar—an ingredient he fell in love with and used to season the rice in this dish.

“The dish changes as you make your way through it. I sear the fish very lightly, and it’s crusted with chile flakes, sesame seeds and my andouille seasoning. It’s then sliced and served atop the fried rice. The rice gently warms the tuna on its way to the table,” he says.

At first, Cureton offered this on the brunch menu, “It was a hit every time it was ordered, but it wasn’t ordered that often,” he says. Then Cureton submitted the dish to a major New Orleans culinary competition and won bronze in the seafood category. “That’s when I knew it was a hit,” he says. “The very next day I put it on as a special, and it soon became the No. 1 seller.”

Next up, Cureton is looking at sourcing as a way to further improve the dish. “I want to source the best tuna and buy the best rice, and I want to learn to make the fermented black rice vinegar in house. Eventually, and with all of my dishes, I want to make everything myself with Louisiana ingredients.”