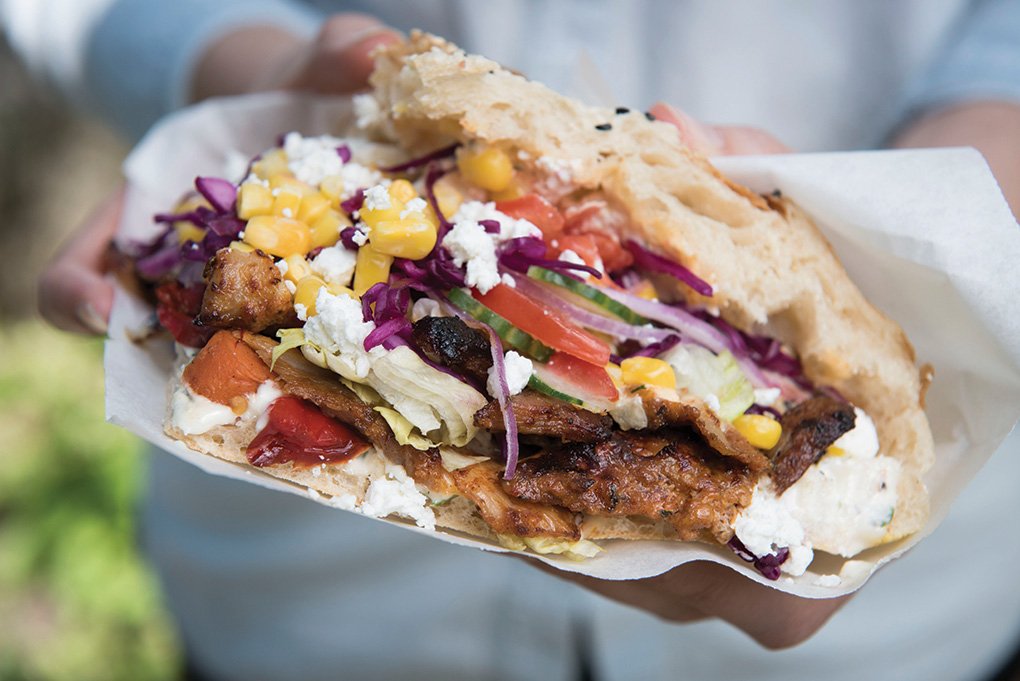 Flavor building is at the crux of menu development, and today’s focus is on bold, complex combinations. Sandwiches have always offered a blank canvas for innovation, where chefs play with each layer, unlocking signature builds with stunning creativity. The challenge is finding sandwiches with the most potential and the biggest crave factor. The Vietnamese banh mi has taken off, and consumers’ willingness to try something that adventurous points to their enthusiasm for flavor innovation within this familiar category. Although global sandwiches are part of this story, they’re not the only entry point. Classic sandwiches play here, too, as long as each component is mindfully considered and the flavors are both tantalizing and inventive. Here are 12 sandwiches that hold great potential—either for reinvention or adaptation.

Middle Eastern flavors and forms are red hot right now, catapulted into stardom thanks to their bold and crave-worthy flavor combinations. Turkey’s döner kebab offers just a bit more modern mystique than the Greek gyro, but delivers a similar experience, with juicy, tender beef or lamb cooked on a vertical spit, then sliced thinly. Shawarma, al pastor and döner kebab bring a flavor system worth exploiting in handheld form.

Satisfying, substantial and flavorful are three qualities that keep this sandwich in regular rotation. The steak sandwich offers plenty of potential for signature takes, with both global influences like chimichurri and modern cuts of meat leading the way. The Gaucho Brazilian Grille in Blacksburg, Va., serves up the Ximango Sandwich, starring picanha, also known as the beef coulotte. It’s tucked into garlic bread with smoked provolone, sautéed Vidalia onions and red pepper, served with a choice of dipping sauces, like chimichurri or guava agrodolce.

Comfort food’s biggest champion, this childhood classic has often been taken to new heights. Today, modern touches include global mash-ups, as well as eclectic add-ins that ratchet up flavor and interest. Outerlands in San Francisco taps into the skillet trend with its Cast Iron Grilled Cheese Sandwich, starring house-baked bread brushed with garlic oil, piled with cheese and grilled in a cast-iron skillet.

A blanket of luxurious Mornay sauce coats the croque monsieur at DoveCote in Orlando, Fla.

Perhaps one of the greatest gifts from France is the classic café sandwich, the croque monsieur. Starring ham, Gruyère and sometimes béchamel, this sandwich is then slathered with butter and toasted until crisp and perfect. The croque madame adds a fried egg to the build, making it a potential breakfast player and giving it the extra unctuousness that eggs deliver. Innovation here comes in the form of tweaks to the protein component, the featured cheese and a play on the béchamel. At Brasserie Jo in Boston, Nicholas Calias, executive chef, swaps out the ham for corned beef and adds choucroute, turning it into a Croque Corned Beef & Choucroute.

At Boston’s La Casa de Pedro, the Cubano gets a signature touch with the addition of housemade spicy pickles and cilantro dressing.

The Cubano has become less exotic over the last few years, and is primed for signature flavor moves, maybe changing up the classic combination of ham, roasted pork, Swiss cheese, pickles and mustard on Cuban bread. The Medianoche, the Cubano’s lesser-known cousin, follows the same build, but stars a soft, sweet, eggy bread called “pan suave.” Meaning “midnight,” Medianoche derives its name from the sandwich’s popularity as a late-night snack.

The BLT’s perfection in both flavor and texture can make innovation seem like gilding a lily. Unless, of course, it’s done really well, enhancing rather than masking, elevating rather than fussing. Today’s upgrades include wedges of avocado, runny poached eggs, crispy crab cakes, braised chicken thighs—all signaturizing this classic without taking away its promise. One example is the Chicken Guacamole BLT at Hyde Park Bar & Grill in Austin, Texas, with grilled chicken breast, guacamole, lettuce, tomatoes, onion and bacon on a toasted brioche bun.

Exploration in Mexican flavors and forms is deepening and widening. The torta, a layered sandwich on a crusty white roll, offers the most room for interpretation. The cemita hails from Puebla, and is a type of torta built on a semi-sweet sesame roll. It usually stars fried cutlets of beef or chicken, or maybe carnitas, and also features avocado, chipotle, panela cheese, white onion and a splash of chile sauce. Authentic cemitas also include a few leaves of papalo, a green herb with a citrusy flavor.

There’s something universal and comforting about a turkey sandwich, with limitless potential for innovation. At its core is the promise of moist, tender turkey, which can turn toward fall and Thanksgiving with a bit of cranberry spread and a spoonful of stuffing, or can move toward summer with fresh herbs and a citrus-spiked mayonnaise.

This Louisiana staple earns attention with a unique combination of fried seafood topped with pickles, hot sauce and mayonnaise, all nestled in a French roll that’s crispy on the outside and insanely soft on the inside. Opportunities for innovation abound, from seafood to toppings. At Fishing with Dynamite in Manhattan Beach, Calif., David LeFevre switches out shrimp every May for Maryland soft-shell crab on his po’ boy, spiked with Cajun rémoulade.

As chefs continue to ratchet up flavor delivery in modern casual seafood dishes, they’re looking to the classic seafood rolls as an opportunity for innovation, perhaps adding regional tweaks and taking a cue from the world of jacked-up fish tacos.

Tempeh subs for corned beef in this vegan version of the Reuben. Sauerkraut, tangy dressing and rye bread maintain the recognizable flavor profile.

The Reuben’s flavor system has seen a lot of play recently, where chefs reinvent the format or combination of flavors (corned beef, Swiss cheese, sauerkraut, Russian dressing and rye bread). Clever iterations include the Reuben egg roll, Reuben soup—and, of course—innovation in the Reuben sandwich.