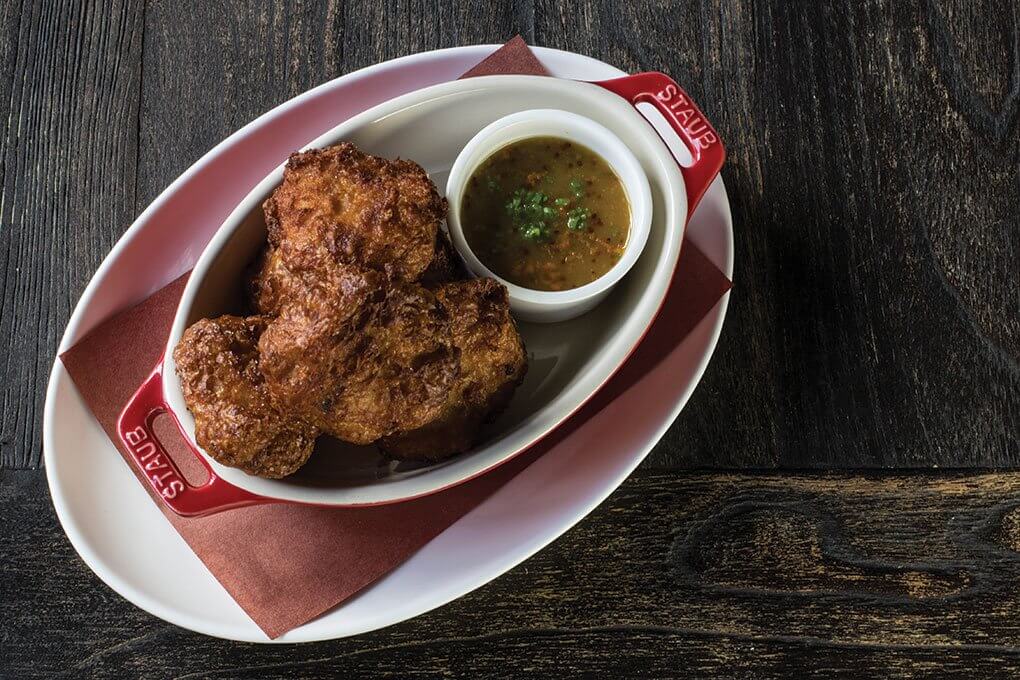 What is it about fried chicken that makes it so universally loved? Some say it’s all about the crispiness, others say it’s the subtle nuances in the batter, the brine, the texture, the right cut of poultry, or even the way a chicken is raised.

Whatever the reason, diners of all ages tend to gravitate toward a crispy and savory batter encrusting tender, moist chicken, whether the menu offering is a straightforward version like chicken tenders or a wildly popular global translation, like Korean fried chicken.

The universe of fried chicken is a broad one, encompassing everything from sandwiches and salads to bar snacks and bowl builds, which means restaurant operators can easily find a style just right for their operation. Execute it well and this menu offering can deliver fantastic results that build revenue, buzz and return visits.

The Fried Chicken Phenomenon at Yale

Yale University’s weekly feature of fried chicken tenders became such a phenomenon that students created the web page IsItChickenTendersDay.com. “They use it to remind each other of Chicken Tenders Thursday,’” says Ron DeSantis, an independent culinary advisor at CulinaryNXT in Branford, Conn.

In his role as director of culinary excellence at Yale from 2011 through 2017, DeSantis set a goal to elevate the chicken tenders and make them a menu superstar. The recipe for success here is pretty straightforward, but it’s the attention to detail that makes them a runaway hit: “We marinate the chicken in buttermilk and spices for 12 hours, then hand-bread it in a unique blend of cracker crumbs, flour, cornmeal and seasoning,” he says.

“The key to hand-breading is to ensure an even, and not-too-thick coating on the tenders. Finally, clean frying oil, exact temperature and just the right amount of pieces fried at a time deliver a best-in-class flavor.” The tenders at Yale are served with a choice of honey mustard, duck sauce, barbecue sauce or Sriracha.

DeSantis believes fried chicken’s crispy texture is one of the biggest reasons for its enduring appeal. “Crispy is the ultimate textural quality we like in food,” he says, describing items with a “crispy, crunchy outside and steamy, juicy inside” as among the highest in craveability.

Texture is indeed crucial in successful recipe building, and fried chicken’s combination of precisely the right textures helps explain why it continues to be a fan favorite. Chicken tenders, when executed well, also hit a home run on other consumer wants, such as nostalgia, comfort, familiarity and satiety. 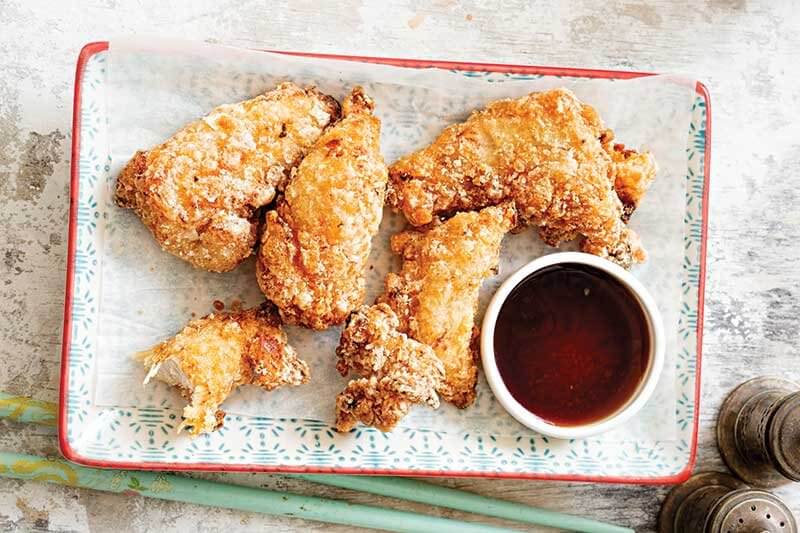 Dan Kish, founder of Food-Fixe, a consultancy in Millbrook, N.Y., says that getting fried chicken right promises menu success—and craftsmanship is the key.

“There’s something about hand-breading, and the time and care it takes to do so that says a lot about the menu at large,” he says. “If a chef is hand-breading, they’re more likely to have taken care with menu items other than just the fried chicken, so how they do their breading is a good indicator of their attention to detail overall.”

And don’t ignore the brine, says Kish, who advises chefs to use their breading or brine to make this dish their own. “In the brining process, you can infuse a lot of flavors and use interesting ingredients like honey or maple syrup as the sugar elements, drawing the flavor into the meat and adding extra moisture.” Signaturizing fried chicken through batters, breading, sauces or brines can give an operation a competitive edge.

Read on for Fried Chicken: 4 Ways to Win

“People really responded to this dish, so we knew the food was good before we opened our Chicago restaurant,” says Cikowski. They are particularly clever in how they showcase their fried chicken—from fried rice, cold chicken-salad sandwiches and ramen to nachos, tacos, Buffalo mac and cheese, and salads—all sporting the brand-defining honey butter.

“From the crunchy crust to the meaty and the juicy, there are so many textures that make fried chicken a craveable dish,” says Kulp. “It’s not a delicate thing to eat. It’s primal, and even within one piece of chicken, there’s a lot of variation from bite to bite. It’s got such craveability, you almost want to attack it!” That craveability makes the time and attention given to a brand-specific take on fried chicken a worthy endeavor.

Globally inspired varieties of fried chicken are gaining popularity and present a unique opportunity for operators, according to Jim Chamberlin, project manager at Datassential. Karaage, a Japanese fried chicken wherein chicken is coated in a potato starch batter before being deep fried, is a prime example. Yielding an incredibly crisp coating and a sense of safe culinary adventure, karaage is poised to make inroads on more menus.

Foodservice operators are experimenting with this dish, featuring it as chicken karaage wraps, salads and deep-fried kimchi karaage.

Of course, Korean fried chicken has also made a major splash on menus, proving the idea that fried chicken translates across borders, enticing with its promise of familiarity and deliciousness.

In all fried chicken applications, technique is everything. Even well-practiced experts like Edward Lee—the James Beard Award nominee known for his superb fusion of Korean and Southern flavors at his restaurants 610 Magnolia, MilkWood and Whiskey Dry in Louisville, Ky.—admits fried chicken is a challenging dish to do well.

“People think it’s just a matter of coating chicken in flour and deep frying, but I’ve been doing it 10 years, and we still get it wrong sometimes,” Lee says. “It’s not an afterthought. If you want to do it right, there’s a lot of prep involved.”

Lee also serves as culinary director at Succotash, with locations in Washington, D.C., and National Harbor, Md. His Dirty Fried Chicken dish consists of four pieces of dark-meat fried chicken glazed in a honey-gochujang sauce. A top seller, it’s served over a blue cheese fondue, topped with pickled fennel, jalapeño slaw and fried nori flakes. “We make a very big commitment to fried chicken, and have an entire station and cooks devoted to the dish at both Succotash locations,” he says.

Lee marinates his chicken overnight in a brine of rice vinegar, soy sauce and Asian spices. “The soy sauce adds flavor, and the vinegar acts as a tenderizer, so you’re guaranteed a more tender meat,” he says. The next day he dips the chicken in buttermilk, dredges in seasoned flour, and fries to order in a pressure fryer.

Given the volume of fried chicken ordered at the two restaurants—approximately 500 pounds of chicken a week—that piece of machinery is key to his success, he says. “The pressure fryer offers intense heat and allows us to get that crispiness while cooking 12 orders at a time—twice as fast as a normal deep fryer.” 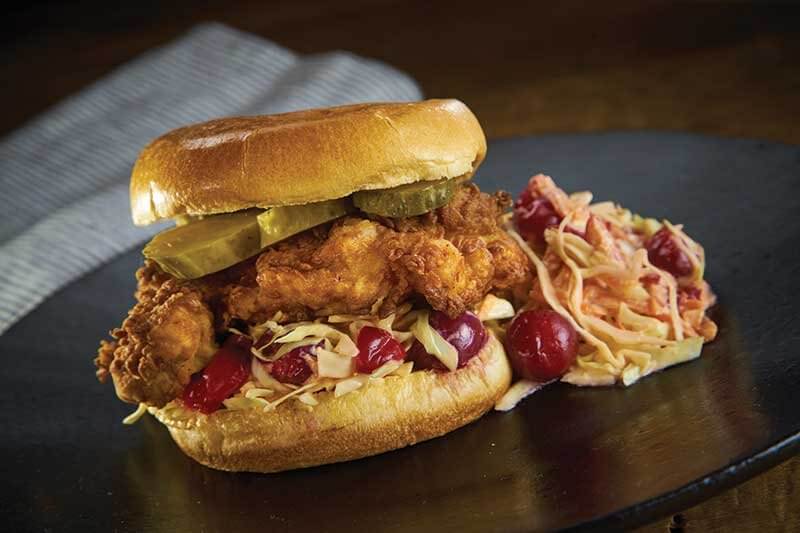 DeSantis says the R&D efforts behind developing flawless fried chicken are worth it, building a signature, craveable menu item. At Yale, he and his team presented student focus groups with a variety of chicken breadings. “One was a super crispy coating that delivered a heavy-duty, crispy crunch, but students showed a clear preference for a lighter breading that resulted in the most desirable chicken tender,” he says. The team also opted not to serve chicken tenders daily. “We served it every other Thursday, and to this day students still look forward to Chicken Tender Thursdays.”

Chefs shouldn’t shy away from getting creative with fried chicken, says Chamberlin. It has a welcome place on contemporary menus, and its applications are unlimited.

Fried chicken sandwiches have certainly been enjoying a renaissance, gaining a competitive edge at places like Shake Shack and David Chang’s Fuku in New York.

The Vandal, an all-day cafe in Pittsburgh, takes a different approach: Its fried chicken sandwich comes on a brioche bun with carrot-rutabaga slaw and a drizzle of chile honey.

And at Pineapple & Pearls, an inventive American eatery in Washington, D.C., the crunchy fried chicken sandwich is topped with sweet-spicy sauce and served between a housemade rice-flour bun.

Time of Day for Fried Chicken

Time of day doesn’t seem to dictate when consumers get a hankering for fried chicken. Research from Datassential indicates fried chicken is now on 11 percent of breakfast and brunch menus — up 68 percent in the past four years, thanks in large part to the chicken-and-waffle boom.

The everyday brunch menu at Sweet Chick, a four-location, fried-chicken-focused chain with restaurants in New York and Los Angeles, features a Fried Chicken and Waffle Sandwich with bourbon-molasses glaze, black-eyed pea spread and crispy jalapeño on a waffle.

Perfecting all the elements of fried chicken requires patience and an investment of time, creativity and determination. But it’s worth it, because this is a dish with enduring appeal and long-standing popularity, promising great opportunities for restaurateurs. Keep at it, says Dan Kish, “because when you succeed, your fried chicken will have its own magic.”