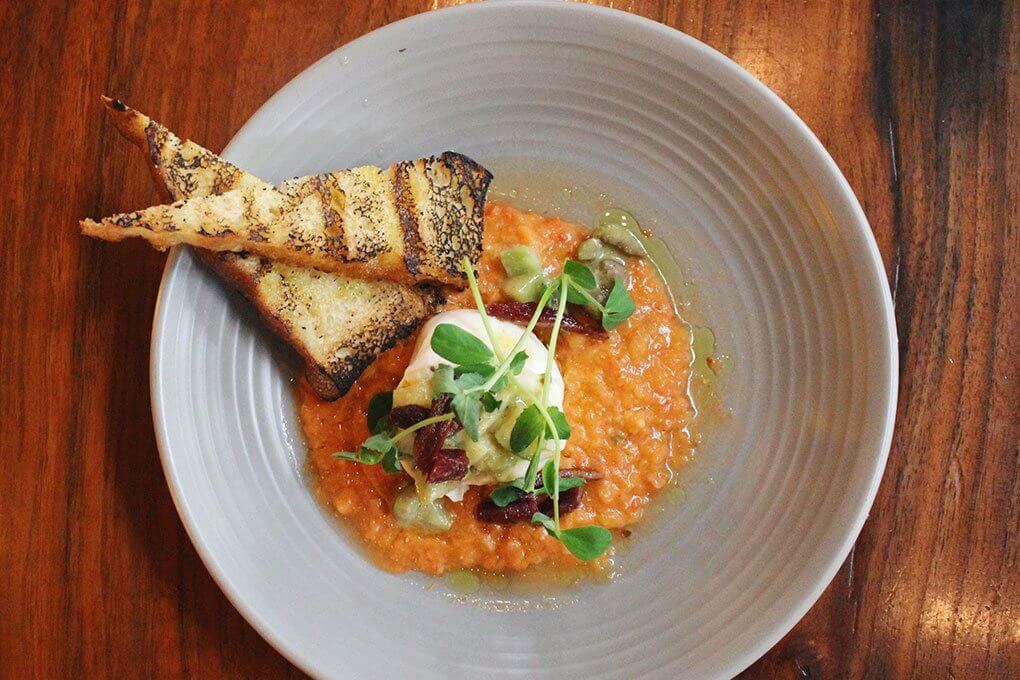 Today, successful menu development often demonstrates a higher level of textural and flavor play, elevating dishes with unexpected and creative combinations. If the ingredients are seasonal and familiar? Even better. At Red Star Tavern, a modern American restaurant in Portland, Ore., chef Dolan Lane breathes new life into two summer staples—gazpacho and burrata with heirloom tomatoes—by merging them and adding a few tweaks. “Burrata is one of those cheeses that, with a little sea salt and olive oil, is perfect on its own when it’s fresh. But as chefs, every year we get kind of bored. So to keep it in the same vein as the tomatoes, I went with gazpacho,” says Lane.

His starter of burrata stars heirloom tomato gazpacho, lamb bacon, Castelvetrano olives, cucumber and grilled focaccia. Using a base of heirloom tomatoes, cucumbers and bright sherry vinegar, he emulsifies the gazpacho with olive oil to give it a creamy consistency so that “it pulls out, but holds in the bowl,” he says. To introduce depth to the sweet and tart flavors, he tops it with crumbled lamb bacon and marinated Castelvetrano olives. “The sherry in the gazpacho, when I think of that flavor, it makes me think of lamb. That’s where I thought, ‘Okay, what if we add this sweet and salty bacon to complement the sherry?’”

The gazpacho is plated on the shallow of the bowl, just to cover the bottom, and topped with a generous lobe of fresh burrata. It’s an ingenious use of a plant-forward purée that adds acidity, freshness and color to the plate, while leveraging an on-trend premium cheese that’s creamy and dairy-fresh. His dish is served with housemade grilled focaccia, cut roughly into half-inch slices for scooping. Naturally, it’s become one of the restaurant’s top seasonal sellers.

“It was all a very natural pairing in my eyes, where everything came together as something buttery with a little sharpness, sweetness and saltiness,” says Lane. “And the bacon tying it all together,” he says. “It’s the first year I’ve done this dish and it’s been very well received. I’ve done burrata salads in the past, using everything from peaches to strawberries and all takes on it. But being Red Star Tavern and keeping a little tradition that people would think is approachable, I kept the tomato and thought it was a great way to manipulate it.”