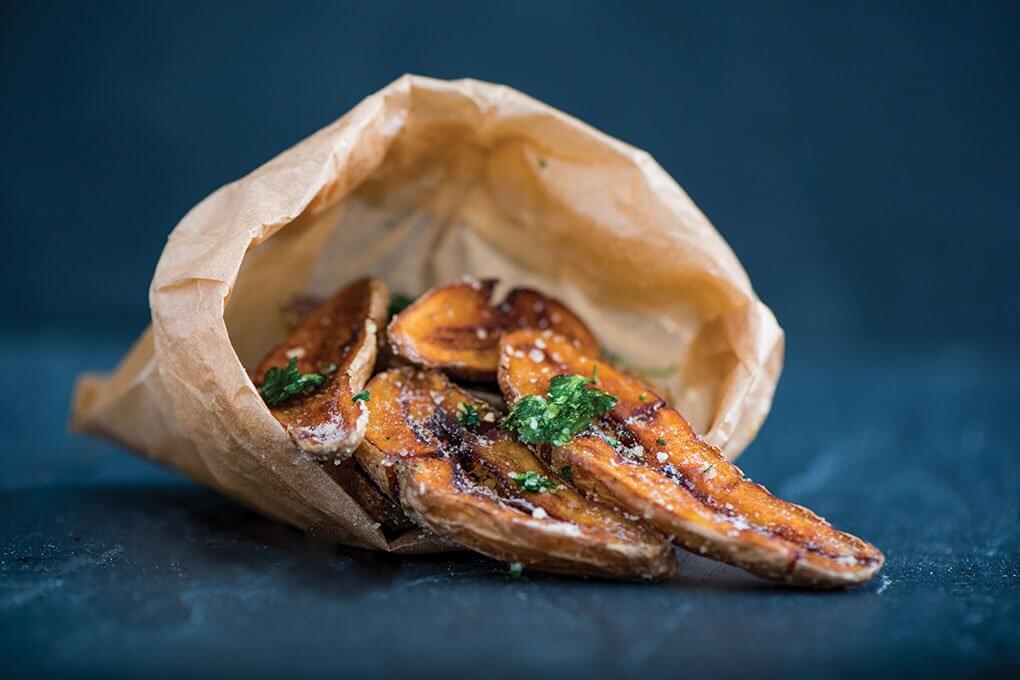 The B.E.C. in Los Angeles serves a side dish of Potato Loosies—seasoned and fried fingerlings tossed with Parmesan.
PHOTO CREDIT: Kim Fox Photography

Is there anything quite as dexterous as a potato? Chefs today are certainly stretching its capability, bending it to glide seamlessly into modern snacks, sides and shareables while counting on its steady stance as one of America’s favorite comfort foods.

At The B.E.C., a delivery-only bodega-style breakfast sandwich shop in Los Angeles, chef Eric Greenspan serves Potato Loosies (pictured above), a craveable snack of seasoned and fried fingerling potatoes, served with spicy sour cream. Named after loose cigarettes sold in New York City bodegas, this potato dish consists of fingerlings that are blanched and halved, then soaked in cold water and tossed in potato starch.

“We then fry them until crunchy and toss them in Parmesan and Old Bay,” says Greenspan. “Loosies taste like a portable home fry in all the right ways. The starch adds a crust to the creaminess of the fingerling potato. The cheese and Old Bay just feel like comfort.” Potato Loosies are just one expression of potato’s modern-day menu magic.

Thick-cut fries served at The Stalking Horse play off of the Philly cheesesteak, with beef, bell pepper, onion, mushrooms and rarebit cheese sauce.

Potatoes fit right at home in the modern snack category, taking on creative flavor profiles while keeping the promise of a familiar, beloved comfort food. The Stalking Horse, a modern pub in Los Angeles, serves a few potato-centric starters. The Dipping Chips star thick house chips (fries), served with ketchup, aïoli and malt vinegar. And the Smothered Fries are inspired by the beloved Philly cheesesteak.

“This is a variation on our specialty Pat’s Pie, which is itself a play on the Philly cheesesteak,” says Trevor Faris, culinary director. “It’s maybe a little out of place in a British pub, but we think it’s tasty so we went for it: chopped beef or seitan, sautéed bell peppers, onions, mushrooms and rarebit cheese sauce, served cascading down and smothering a pile of our thick, hand-cut chips.”

On the Menu: Snacks

Juniper in Austin, Texas, offers Puffy Potatoes on its snack menu, a crispy, savory bite served with a side of whipped Dijon.

Poppable, crispy and savory, the ever-popular tot format has invited chefs to innovate for a while now, from loaded tots to flavor-forward dipping sauces. We love the evolution here, seeing creativity in textural play.

At Juniper in Austin, Texas, serving Northern Italian-inspired cuisine, the Puffy Potatoes riff on tots, making the interior smooth and creamy. Served on the “cicchetti” or bar snacks menu, the potato bites are crispy on the outside with a fluffy consistency on the inside, served with a dipping sauce of whipped Dijon.

The Spanish bomba is a first cousin to the tot. A two-bite mashed potato ball, sometimes stuffed with various ingredients, is rolled in bread crumbs and deep fried, then served with some kind of flavored aïoli. The Mashed Potato Bombas at Boulder Beer Company, a craft brewery in Boulder, Colo., sees russet potatoes and heavy cream combined with green onion, bacon and both Jack and cheddar cheese. Scooped and formed into balls, they’re rolled in flour, buttermilk, then panko, and deep fried.

“When creating this pizza, I tried to imagine the first of spring and all the wonderful vegetables that pop up,” she says. “We use new potato as the base to add creaminess to the pizza, while allowing the spring peas, leeks and green garlic to shine through. We roast the potatoes in the wood-fired oven before we add them to the pizza, which lends a natural smokiness and texture with crispy edges and a creamy center.”

At Yuyo, the causa layers a mixture of chilled purple potato, lime juice and ají amarillo (or rocotto) with crab, then tops the dish with aïoli and garnishes it with micro celery

For a Good Causa

Potatoes play a big role in Peruvian cuisine, with the causa standing out as a dish that’s easily adaptable to American menus, thanks to its malleable format of a flavored potato purée terrine.

At Yuyo, a modern Peruvian restaurant in Austin, Texas, Chef Maribel Rivero makes the causa an Instagrammable star. She layers a mixture of chilled purple potato, lime juice and ají amarillo (or rocotto) with crab, then tops the dish with aïoli and garnishes it with micro celery.

“We use purple potatoes for our causa, which makes for a beautiful contrast in colors and textures,” she says. “The crab adds a slight sweetness to the dish, and the lime and ají bring acidity and heat, while the potato is the perfect base to balance the dish.”

De Maria, a vegetable-forward restaurant in New York, serves a side of Turmeric Potato Gratin, made with cashew cream and blue cheese

Sides today need to stand out with a meaningful flavor story, so although a baked potato with sour cream or a mound of crispy, salty fries can still be wonderful, many chefs are upping their game. De Maria, a vegetable-forward restaurant in New York, serves a side of Turmeric Potato Gratin, made with cashew cream and blue cheese.

“This dish is inspired by a dish that I used to eat when I lived in Spain,” says Chef Adriana Urbina. “I absolutely love cashews and blue cheese, so I started experimenting, and the Turmeric Potato Gratin came to life. It’s a delicious mix of comforting flavors.” It also weaves a compelling narrative, moving the gratin into signature status.

In today’s landscape, entrées need to compete with shareables, bowls and snacks. Elevating each element of the build helps. If one of those elements is potato-based, modern menu innovation encourages delicious and creative flavor combinations. Potato cakes can add both structure and heft to an entrée, inviting culinary creativity in execution and profile. Whether chefs go with an update on latkes or form their cakes out of hash browns or mashed potatoes, cakes lend a beautiful assist to the protein component on the plate.

At Ocean Prime Beverly Hills, part of the Cameron Mitchell Restaurants family, Geoff Baumberger, executive chef, includes a potato cake as an integral part of his version of Surf & Turf: an 8-oz. filet, butter-poached lobster, smoked Gouda potato cake, chile-seared spinach, Cabernet truffle reduction, and Béarnaise. “The smoked Gouda potato cake does a great job of giving the dish a base and something that is able to soak up all of the wonderful flavor of the broiled filet mignon, butter-poached lobster tail and the chile-seared spinach,” he says. “It gives the dish distinct flavor while not overpowering it, allowing the components to come together in one bite.”