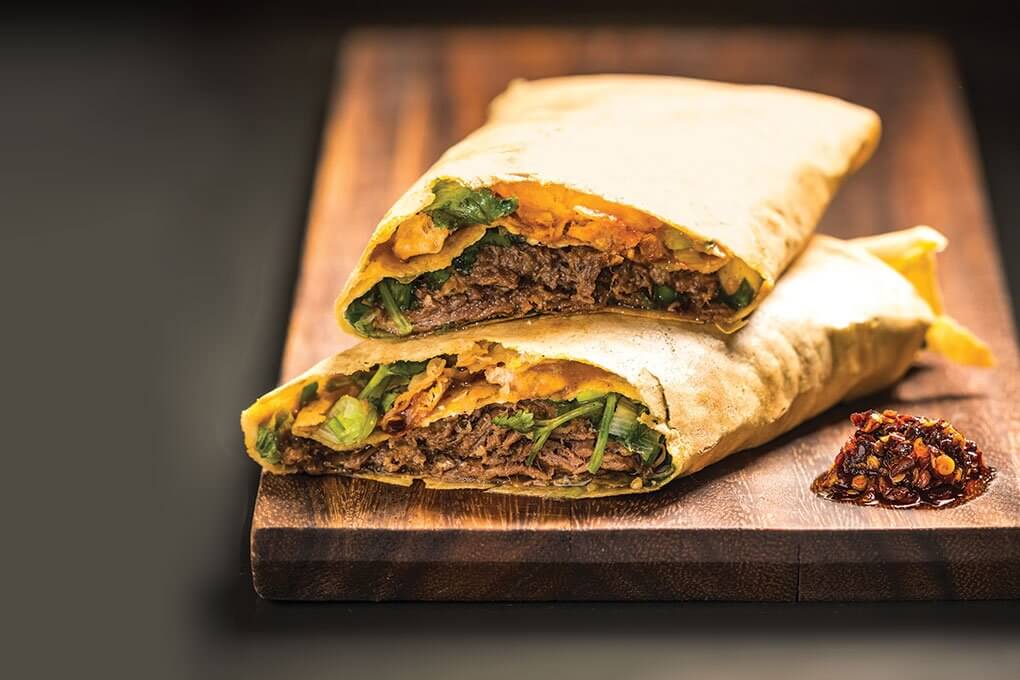 Jianbing Company in New York specializes in Shandong-style bing, which features a crispier dough, along with a crunchy cracker.
PHOTO CREDIT: Jianbing Company

Global street food offers a bounty of inspiration, energized by a rough-and-ready approach that leads to wildly flavorful creations. But under that rogue cover that keeps street food edgy and exciting is a foundation of practicality.

This kind of food is eaten on the go, on the run. It has a built-in casualness and portability that absolutely jives with American consumers. The Korean taco was born on the streets of Los Angeles. The banh mi got its foothold through food carts in New York and San Francisco.

What’s next? The bing—more formally known as the jianbing (pronounced “jeeyan-bing”)—has all of the markers of a global carrier home run.

The bing is a staple on the streets of Shanghai and across China—as well as Taiwan. It’s a large, thin savory pancake made from a batter that usually combines wheat flour and mung bean flour. The batter is spread thin on a hot griddle, then topped with cracked eggs, which are spread over the batter.

Black sesame seeds, scallions and cilantro get sprinkled on top, then the pancake is flipped. Black bean or soy paste, along with chile paste, are brushed across the bing, and a crispy, fried cracker (known as cuibing or baocui) is layered atop, along with various fillings.

The bing is then folded into an easy-to-carry packet. The role of that cracker cannot be overstated—its crispy texture dials up the craveability. 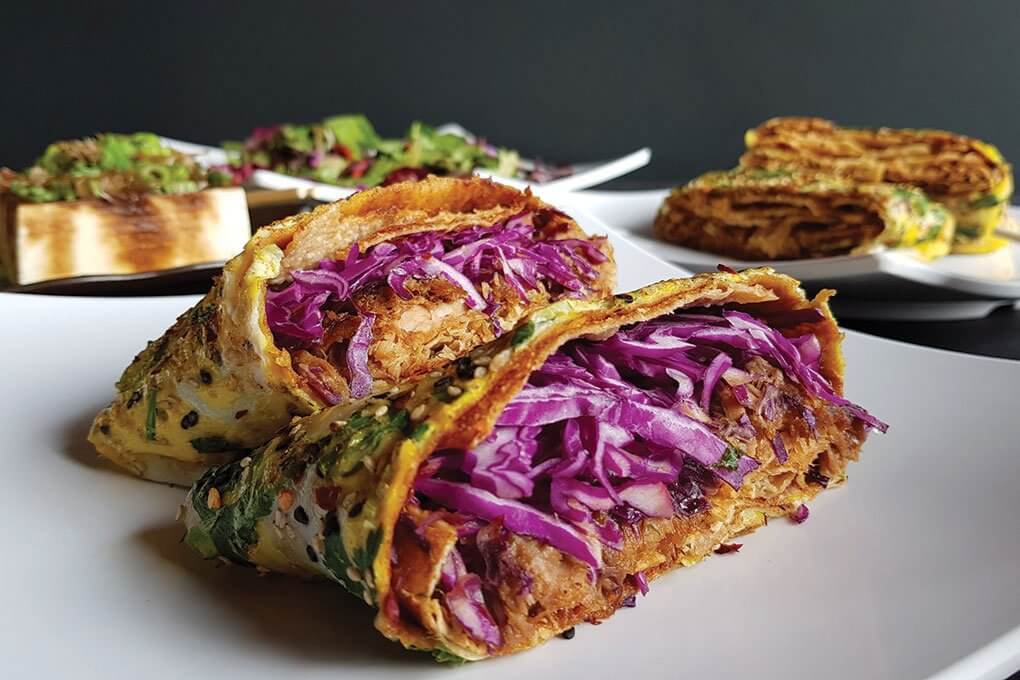 Possibilities abound for fillings, like the barbecue pork and purple cabbage in this version from Tai Chi Jianbing in San Francisco.

“The bing is the latest iteration of a cuisine—Chinese—that consumers feel comfortable with and are looking for new experiences with,” says Maeve Webster, president of Menu Matters consultancy. “It can be offered in countless iterations, from extremely traditional to fantastical mash-ups. ‘Bing’ is easy to say, the format is intuitive to consumers, and it’s versatile across all dayparts.”

Chefs are translating the bing onto menus here, leveraging its built-in crave factor while bending it to fit their concept. Tai Chi Jianbing, a catering company in San Francisco, describes its bing as “rich, soft and crunchy.” Its BBQ Pulled Pork starts with a batter of organic unbleached wheat and bean flours and cage-free brown eggs, which is layered with green onion, cilantro, roasted sesame, sweet bean paste and garlic-chile sauce, and folded over crispy wonton, all-natural barbecue pork, onion and purple cabbage.

Bing Bing, a fast casual in the St. Louis suburb of University City, Mo., taps into one of the biggest opportunities with this savory pancake wrap: its customizability. It offers two types common in China: the Shandong style (a blend of yellow corn, soybean and wheat flour that results in a crispier bing) and the Tianjin style (a softer, more delicate version created from a blend of mung bean, wheat and rice flour).

At Bing Bing, each pancake’s batter is brushed with egg, then topped with scallions, cilantro, lettuce, Chinese pickles, sesame seeds and crunchy wonton. Guests then pick a hoisin-based or mayonnaise-based sauce, and choose from 13 protein options, including lemongrass chicken, barbecue pork and Taiwanese sausage.

The newly opened Ms Chi Cafe, a Chinese-American restaurant in Culver City, Calif., demonstrates the mash-up potential inherent in the bing with its selection of “scallion pancake sandwiches.” The Mr. Chi stars Chinese-spiced pastrami, hazelnut pesto and a Beijing mustard vinaigrette. The ABC version commits fully to an American profile with avocado, bacon and shredded chicken.

“The bing is a Chinese tortilla. It’s a white plate, a blank canvas,” says Matt Harding, director of culinary and corporate executive chef at fast casual Piada Italian Street Food, based in Columbus, Ohio. “It could be the next Korean taco. This savory crêpe is a great medium. Put an egg in it, it’s breakfast. Add chicken, it’s lunch. It’s a great street food that hits all of the spicy, sweet and savory notes that are the hallmarks of today’s craveable food.” 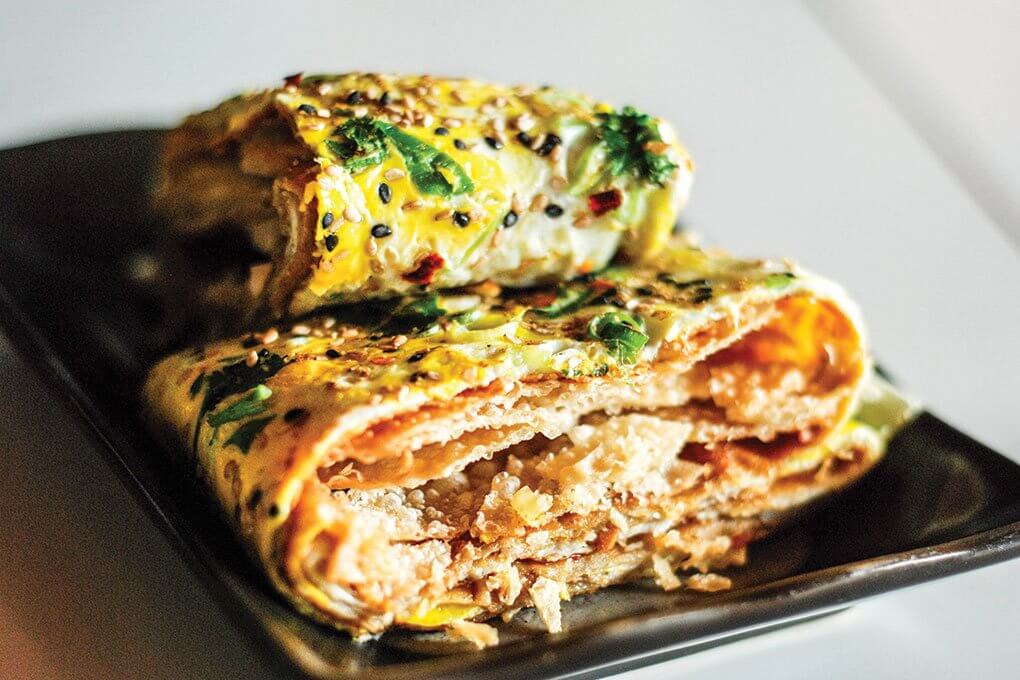 Crispy cracker adds to the crave factor of the jianbing experience.

Jianbing Company, a fast casual with locations in New York and Brooklyn, serves authentic Chinese street food. “We understand that it’s not well known here, but our vision is to become the foremost authority of jianbing in the U.S.,” says Tadesh Inagaki, co-founder.

The concept’s jianbing is made in the Shandong style—crispier and drier, which makes it more suitable as a handheld, he says. “We use four different flours in the batter, and it’s beaten heavily so it’s very doughy, giving it good structure as a handheld sandwich.”

He builds the base in a traditional manner—egg over the top, scallion and cilantro scattered over the surface, made-from-scratch crispy cracker adding textural play. Guests can then choose from five protein fillings, including hoisin-lime beef, 13-spice pork and honey-ginger tofu, and either a dark, savory sauce or a sweet chile sauce, both made in-house.

“The secret weapon of the jianbing is the crispy-fried cracker,” says Inagaki. “It’s a staple part of the experience and creates a texture dynamic that sets the jianbing apart.” 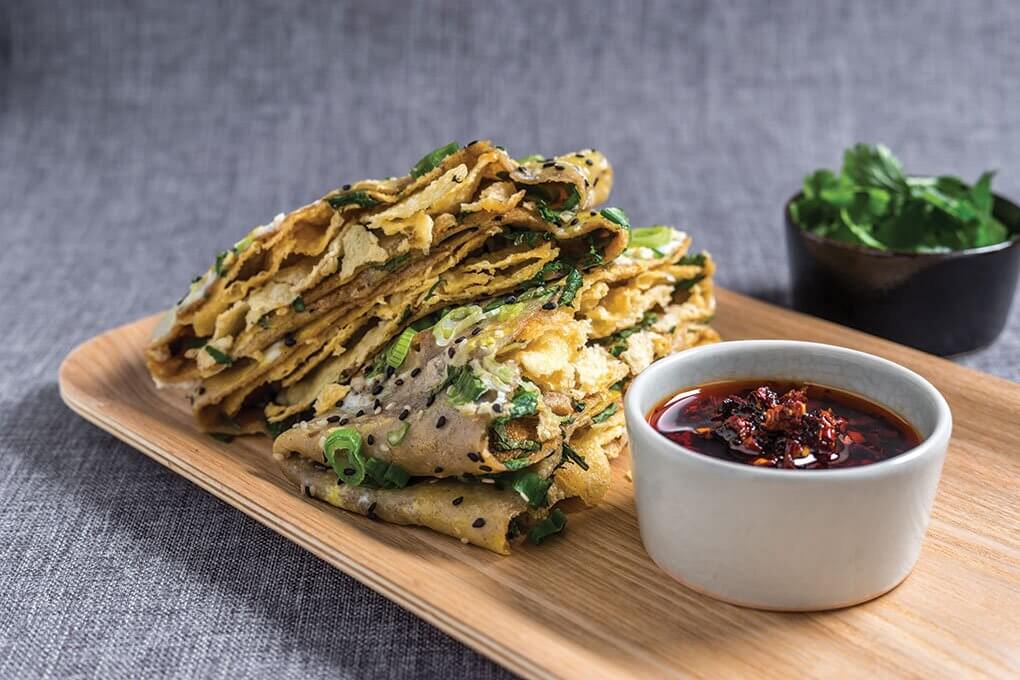 Jianbing Company doesn’t Americanize its product with the easier-to-pronounce “bing.” Nor does it call it a scallion pancake or Chinese crêpe. Its branding is built on a foundation of authenticity. “We’re framing the idea of the jianbing for a lot of consumers,” says Inagaki. “We’re confident that there will come a time when ‘jianbing’ becomes a household name, so we wanted to keep our branding at the forefront of the name.”

Bing Trend Insights – thoughts and opinions from our panel of experts

“It was so popular that we decided to serve the bing at the four Panda + Tea locations [a sister concept to Panda Express] we have in Los Angeles.” Guests can customize their scallion pancake wraps, adding fillings like Panda’s famous Orange Chicken, Beijing Beef or Honey-Walnut Shrimp. Guests can choose from three warm sauces (sweet Mandarin, black pepper, or sweet and sour) and three cold sauces (green onion, red-chile sambal, and citrus-ginger vinaigrette). For crunch, options include crispy wontons, pickled cucumber and crispy shallots.

“Panda Express’ Scallion Pancake Wrap is slightly thicker with a nice, chewy texture,” says Lok. Its popularity, he says, comes from its versatility. “It’s been one of our best-selling options since its introduction in 2014. One of our product development insights that was reinforced from our experience with the bing is that guests love customization and portability.”

The naming strategy for the bing varies—from Jianbing Company’s traditional use of “jianbing” to Panda’s description of a “scallion pancake wrap.” Harding says that for chains, going with “bing” or “Chinese pancake” is a smart way to make this crêpe approachable. “If you want to get adoption, you have to get into consumers’ thoughts,” he says. “You need to make it easy to pronounce and easy to relate to.” 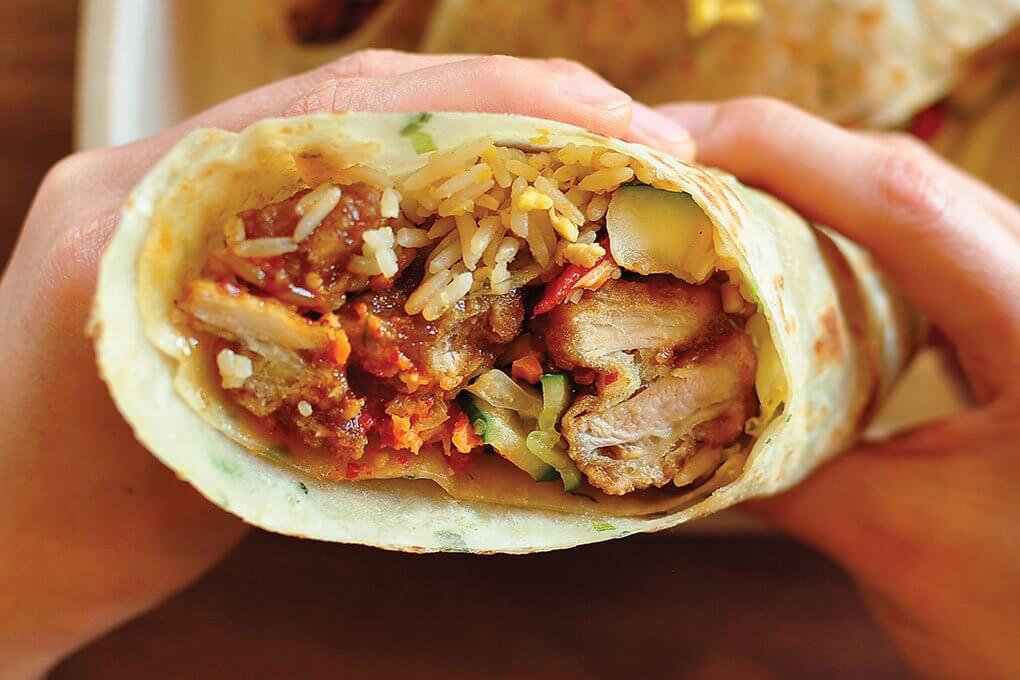 However it’s named on menus, there’s no denying bing’s potential across dayparts and across platforms. Much like a taco or a sandwich, the carrier can hold a world of flavors in its crispy, savory, satisfying form.

Mr Bing, with five locations and one food cart in New York, showcases the bing’s versatility with fillings like Cantonese-style roast pork and General Tsao’s chicken. It’s also demonstrating how well the bing works as an American breakfast option. Guests can choose from four breakfast versions, including a Nutella Bing, along with a Maple, Bacon, Egg & Cheese Bing. 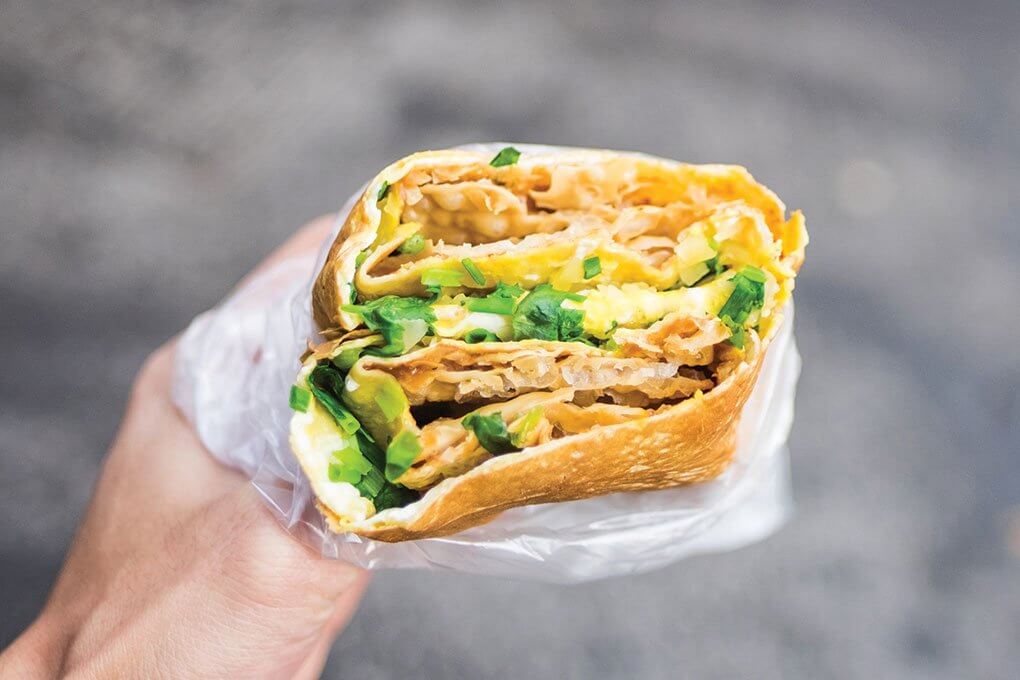 Jianbing serves as a convenient vehicle to combine crowd-pleasing Chinese flavors in a cutting-edge street-food format.

“It’s actually a great option for brunch menus,” says Brian Darr, managing director at Datassential. “It’s not a far stretch from a French crêpe or Russian blini, and it fits into that safe experimentation category that Americans like so much.” And although Datassential reports that jianbing has fairly low awareness, that’s growing, especially with younger generations, says Darr.

Gabriel Caliendo, VP of food and beverage at Lazy Dog Restaurants, a Southern California-based casual dining chain, sees big potential for the bing on American menus. “The bing is very textural and a great vehicle for flavors. It lends itself to whatever you want to put in it, and operationally, you can use a griddle or a plancha or a cast-iron pan. The biggest execution challenge is holding time—you want to be able to serve it right away,” he says.

Although Lazy Dog isn’t menuing the bing currently, he would follow Panda’s naming strategy. “We’d probably call it a crispy scallion pancake, then describe it as ‘our version of the traditional jianbing.’”

Piada’s Harding also sees opportunities with the bing. “Here’s another thing you can transfer flavor to, it has a great name and is insanely delicious,” he says. “If you were to design something that would take off, it would look very much like the bing.” 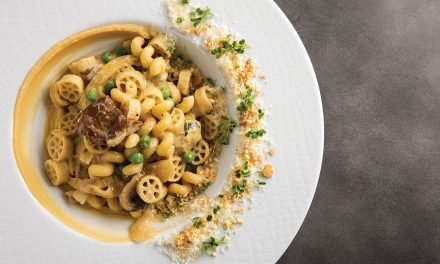 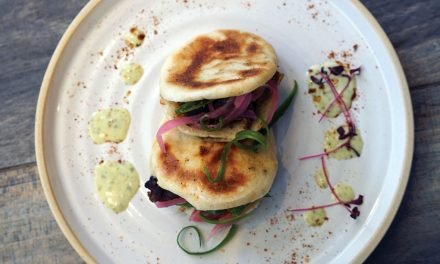 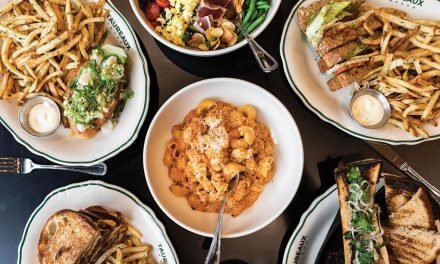