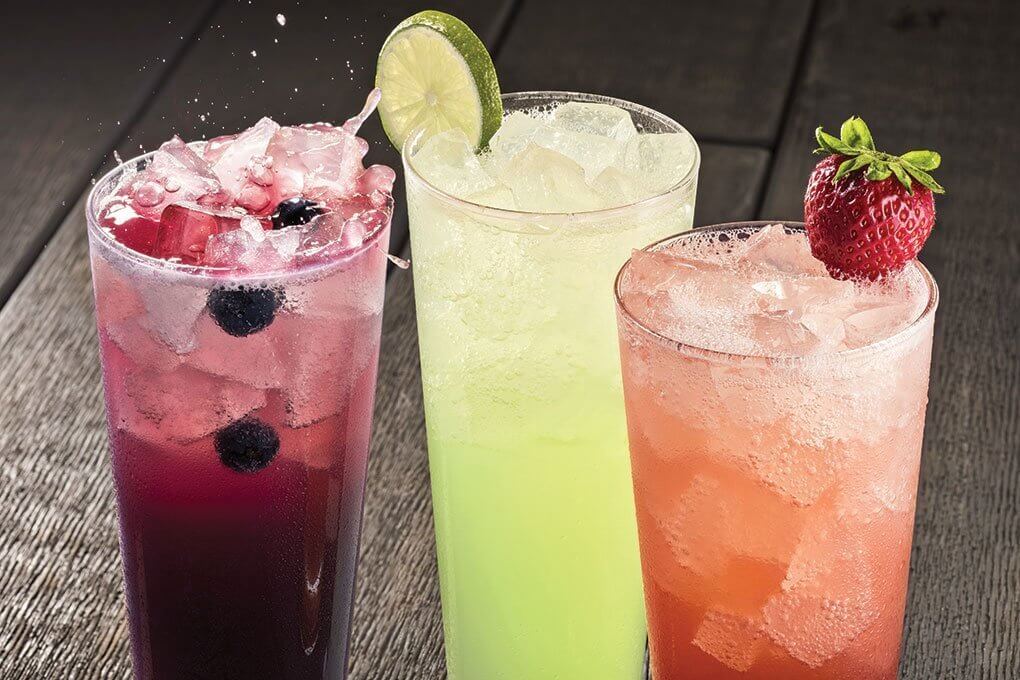 While the opportunity in nonalcoholic beverages continues to expand, it’s also shifting. As consumer preferences and cultural touchstones evolve, demands and expectations evolve, too.

The baseline for modern innovation in this category takes its cues from both cocktail culture, where every element of a drink’s build is thoughtful, and the driving demand for refreshing, creative choices. That translates to a landscape dotted with ingredients that are new and fresh, presentations that engage the senses, and beverages that are unique — all adding up to a memorable experience.

Introducing housemade nonalcoholic beverages is also smart because consumers associate them with higher quality. Craftsmanship terms like “housemade,” “house-brewed” and “hand-shaken” can help build authenticity. “These are key words that drive sales in a restaurant,” says Pereyra.

At first, the chain didn’t indicate that the beverage was housemade, says beverage consultant Kim Haasarud of Liquid Architecture, in Phoenix, who counts P.F. Chang’s among her clients. “When they specifically highlighted that fact on their menu, it was really well received,” she says. Operators are catching on, with beverages marked “housemade” increasing 46 percent from 2012 to 2016, reports Technomic.

In 2016, hot and cold beverages generated more than $181 billion in sales. Consumers are clearly willing to spend on beverages, but, increasingly, that means operators have to step up their game.

Fast casuals like Mediterranean-themed Cava, based in Washington, D.C., and Panera are setting the bar high with interesting housemade drinks that often boast a health halo thanks to natural ingredients, like Cava’s winter Beet Lemonade and Panera’s Plum Ginger Hibiscus Tea. Not only do beverages like these help brands stand out with unique offerings, they deepen the message of craftsmanship and authenticity.

Artisan sodas offered at Roam Artisan Burgers are sweetened with only fruit juice or agave. Housemade flavors such as Ginger-Lime and Prickly Pear are available year round.

Consumption of traditional sugar-sweetened soda has been significantly declining for more than a decade. Consumers are choosing a number of alternatives, from aguas frescas and flavored waters to hand-pressed juices and craft sodas.

Datassential reports that menu mentions of craft soda have grown by 10 percent in the last year and 40 percent over the last four years. Craft soda is winning fans with flavors not traditionally found in soda, with pomegranate, grapefruit and pear among the most popular flavors.

Roam Artisan Burgers, a casual-dining concept with five locations in the San Francisco Bay Area, opened with the mission to serve wholesome, sustainably sourced burgers, but wanted the health-centric halo to extend to its drinks menu, too. “We wanted to figure out a way to offer sodas, which are a pretty controversial menu item,” says co-owner Lynn Gorfinkle, referencing the link between sugary sodas and obesity.

With more than 3,000 locations, drive-in fast-food chain Sonic, based in Oklahoma City, does housemade sodas on a much larger scale. Its Splash Hand-Crafted Soda line of “guilt-free, artisanal beverages” are made to order and feature a sparkling-water base infused with layers of real fruit and fruit flavors.

Sonic has also introduced cream soda. Cream soda menu mentions increased by 15 percent in the last year and 24 percent over the last four years, reports Datassential. In 2016, Sonic introduced a line of Old-Fashioned Sweet Cream Sodas in flavors such as Green Apple, Blue Raspberry and Cherry.

And BJ’s Restaurants and Brewhouse, based in Huntington Beach, Calif., has a line of handcrafted draft sodas that includes Orange Cream Soda and Vanilla Cream Soda. The Orange Cream Soda is also featured in the Orange Twist Mocktail, made with white peach and blood orange syrups, cranberry juice and fresh lime.

Operators are meeting consumer demand for wholesome beverages with naturally sweetened, fresh and flavorful lemonades. According to Datassential, the following lemonade descriptors have seen an increase over the last year: “organic” (up 19 percent), “seasonal” (up 7 percent) and “fresh-squeezed” (up 5 percent).

Operators are increasingly infusing lemonades with ingredients like cucumber and basil, and even kale, signaling a larger trend of more savory additions to drinks. As an example, Datassential reports that from 2010 to 2015, greens surged by 133 percent in beverage mentions.

Lemonade, a modern cafeteria-style fast-casual based in Culver City, Calif., offers seasonal cold-pressed lemonades, including a Cucumber Mint version, leveraging the refreshing visual cues showcased by the prominent placement of the bubblers.

“Lemonade is something that everybody knows. It’s a comfort zone; it reminds you of your childhood,” he says. “Adding the bell pepper is a nice twist, something unusual. The flavors work. We’re trying to be a little different—something that will surprise our guest.”

Well-known lemonade flavors like pink lemonade, strawberry and raspberry, continue to be top offerings, but tropical and seasonal flavors are on the rise. Blueberry lemonade is also growing fast, increasing by 106 percent between 2012 and 2016, according to the U.S. Highbush Blueberry Council.

Lemonade’s cousin, limeade, is also having a moment, from quick serve to upscale. To complement the earthy, creamy matcha latte that’s popular at

At Firehouse Subs, a sandwich shop with more than 1,000 locations and based in Jacksonville, Fla., Cherry Lime-Aid has been on the menu since the concept opened in 1994. The lime was hand-squeezed at the original location, but as the company grew, it partnered with Coca-Cola to deliver the product via Coca-Cola Freestyle machines.

“Limeade has been enjoyed in Jacksonville for years and years, and everybody has a different twist on it,” says Chris Sorensen, co-founder. “My brother and I created our own version that tasted the way we like. In the beginning my mom would serve them, hand-squeezing the lime. It’s very refreshing—and it’s part of who we are. We’re unique. We’re authentic. This is just something different we offer that the next guy doesn’t.”

It’s all about the process. According to Google’s 2017 Food Trends report, how a drink is made is now just as important as what’s in it. Cold-brew coffee and nitro coffee were the highest searched terms in their category from April 2015 to 2017, reflecting rising interest in process-driven drinks.

Alongside process, coffee drinkers want geographically diverse options. Haasarud of Liquid Architecture says consumers have never been more aware of the difference between, for example, coffee from Kenya or Guatemala. Quills Coffee, with several locations in the Louisville, Ky., area and in Indianapolis, is a good example of this, differentiating between Gigesa coffee from Ethiopia and Kiunyu coffee from Kenya in its pour-over offerings.

An educated consumer base is also pushing growth in global-style coffees. Datassential reports that the cortado, espresso with steamed milk, has grown by 41 percent, Vietnamese iced coffee by 9 percent, Turkish coffee by 7 percent, and café con leche by 2 percent in the last year.

Sqirl offers both the cortado and Vietnamese iced coffee. More familiar Italian styles are growing, too, with macchiatos up 12 percent and Americanos up 9 percent in the last year.

While dessert-flavored coffees have become more common, butter-flavored coffee is branching out beyond the phenomenon of bulletproof coffee, in which butter and oil are added for a health boost.

“We were looking for a fall flavor that was comforting and unique for our guests,” says Jessica Dinon, who heads media relations for Olive Garden. The beverage’s flavors are familiar on their own yet unique together, and the drink was developed to pair well with several desserts, a proven strategy in driving revenue.

Expanding the Concept of Sweet Tea

Eighty percent of the tea consumed in the United States is iced, according to the Tea Association of the USA. These days, much of that iced tea is Southern-style sweet tea.

Interesting flavor combinations are driving iced tea purchases overall; the fastest-growing flavors in the last year were pineapple (up 58 percent) and kiwi (up 42 percent), according to Datassential.

Confirming Mintel’s report that texture is increasingly important to consumers, boba tea has been growing steadily. But boba’s growth also paves the way for other textured teas, like cream cheese tea—tea topped with a layer of whipped cream cheese.

The trend, which originated in Taiwan, has made its way to Happy Lemon in New York and Little Fluffy Head Café in Los Angeles. The drink appeals to Millennials with its built-in photo opp—the cream cheese moustache—satisfying the demand for a unique experience.

But Little Fluffy Head Café owner Jenny Zheng believes cream cheese tea is more than just a fad. By investing in locally sourced cream cheeses that are hand-whipped daily and pairing them with unique ingredients, Zheng says, “People are coming to our store not just once to take a picture of this unique Asian drink, they are coming back because they like the drinking experience.”

The idea of “cream cheese tea” may be greeted with skepticism, but the beverage, offered at Little Fluffy Head Café in Los Angeles, introduces interesting texture and complex flavors to the tea category.

Kombucha, Switchel, and Kefir are Expanding

While menu penetration remains low, this category is ripe for expansion, led by its VIP: kombucha — that fermented green or black tea that promises all sorts of health benefits.

Currently available on just 1 percent of nonalcoholic beverage menus, kombucha has grown by 52 percent on menus in the past year, according to Datassential.

Haasarud says fermented drinks like kombucha and switchel, a vinegar-based beverage dating back to Colonial times, are most likely found at eateries that focus on wellness because they fit the brand. This is certainly true at Roam, where one tap is dedicated to rotating kombucha flavors.

“You could argue that kombucha might not be the best thing to pair with a burger,” says Roam’s Gorfinkle. “But from a health perspective—and knowing who our customers are — it was something we were passionate about doing.” Front-of-house staff is trained to educate those diners who have never tried kombucha, and since the beverage is offered on tap, it’s easy to offer a taste. But fermented beverages are finding a place outside of health-focused brands, responding to a growing demand by consumers for functional food and beverages.

Alongside kombucha, switchel is also gaining traction as consumers connect with its detoxifying reputation, natural maple sweetener and electrolyte boost.

Bottled switchel can be found at health food stores and wellness-focused cafés. Some eateries make their own, like Mei Mei in Boston, which replaces the traditional maple syrup in switchel with raw honey and adds fruit bitters for a unique twist.

Increasing awareness of kombucha and switchel is driving interest in lesser-known offerings like kefir, a fermented dairy product. Upscale steakhouse Grand Oak Farm to Table in Cherry Valley, Calif., features an organic kefir sweetened with honey on its brunch menu.

The menu highlights the drink in a section explaining what kefir is, its health benefits, and how it’s made. Operators interested in expanding their reach with fermented beverages can boost consumer awareness by doing the same.

By investing in more robust nonalcoholic beverage programs, beverage developers can strengthen their brand connection, meet changing consumer expectations and drive revenue. Creating drinks that use natural sweeteners, trend-forward flavor combinations and offer a memorable experience will resonate with the growing number of consumers who are willing to pay for interesting and flavorful nonalcoholic beverages.