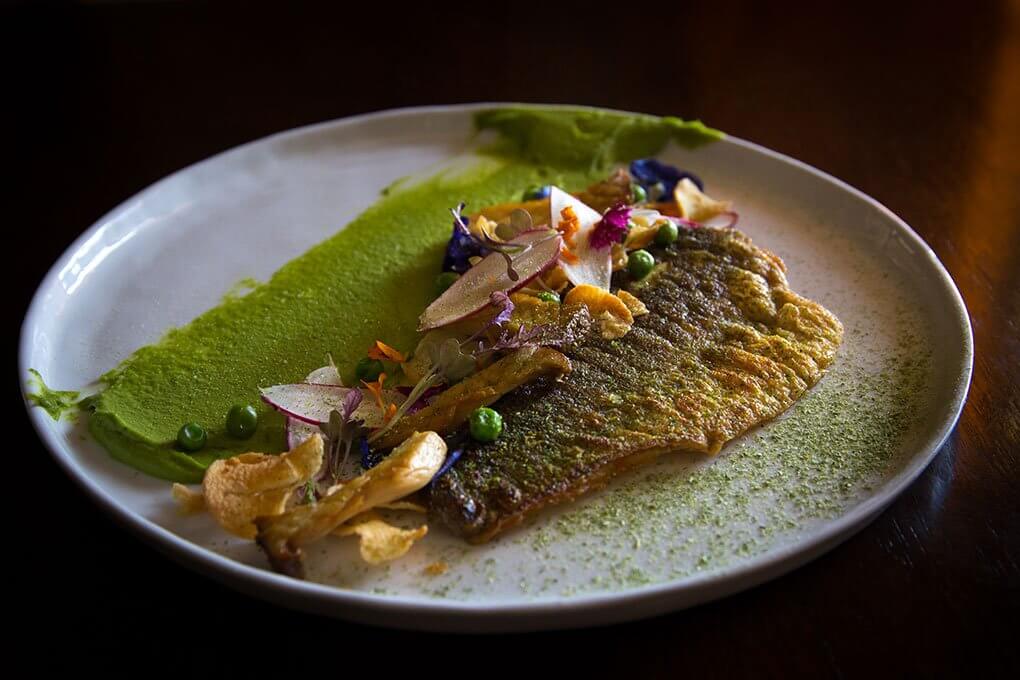 There’s always something new to discover in the world of flavor. We’ve got our eye on two ingredients that are in play on a few menus across the country—licorice root and mesquite flour. They’re certainly not trending, but they each bring a unique narrative to a recipe, capturing that first-to-market momentum that helps build menu differentiation.

We tapped Gio Osso, executive chef/owner at Virtù Honest Craft, a Mediterranean influenced restaurant in Scottsdale, Ariz., to demystify these ingredients and share ideas around their modern menu potential.

This comes from the root of a herbaceous legume that is native to southern Europe and parts of Asia. The dried root is often steeped into liquids or made into a powder. Its profile is woodsy, sweet and anise-like, with a lingering flavor. At Virtù, Osso uses licorice root powder from Calabria, introducing yet another sense of place from Italy.

“My favorite thing about licorice powder is that it brings a certain sweetness to savory dishes,” he says. He cautions that judicious use is important here. “It has a huge flavor and can be overpowering—a little goes a long way. It has a beautiful lingering flavor that keeps going and going,” says Osso. His Licorice Root-Rubbed Orata (sea bream) is coated with a pistachio-liquirizia dust, then seared and served with crispy sunchokes, mushrooms, liquirizia English pea silk and marinated radish.

He’s also featured licorice powder at Virtù in goat cheese “truffles.” He molds the goat cheese into balls and covers them with licorice root powder. “You can then fry those or keep them fresh, and serve them in a salad or on a cheese board,” says Osso. “The protein I love pairing licorice with the most is pork—it’s a match made in heaven.” He makes a rub with licorice powder, dark cacao and salt, and rubs it on pork. “I counterbalance the bitterness of the chocolate with the sweetness of the licorice,” he says.

Here are a few other ways chefs are featuring licorice root on their menus.

This gluten-free, high-protein flour is made from the dried and ground pods of the mesquite tree, which grows in both Mexico and the Southwest. Its flavor is sweet and nutty. At Virtù, Osso turns to mesquite flour to incorporate Southwestern flavor into his Calabrian-inspired dishes. He uses the flour in housemade pastas, such as his Mesquite Gnocchi with Two Wash guinea hen confit, hazelnuts, black currants, tobacco molasses, as well as his Mesquite Flour Pappardelle with cuore di manzo ragù, made with beef heart, roasted garlic, Marsala, butter, fresh basil and Parmesan.

“Mesquite flour is made from grinding mesquite pods into a powder, and one important thing to keep in mind when working with it is that it has a lot of moisture, so when you’re making gnocchi or pasta out of it, you have to cut it with regular flour,” says Osso. He’s also used mesquite flour in polenta, which he says imparted a really interesting flavor profile. “I’ve also used it in cakes because it has a robust, interesting cinnamon flavor to it,” he says.

Here are a few other ways chefs are featuring mesquite flour on their menus.