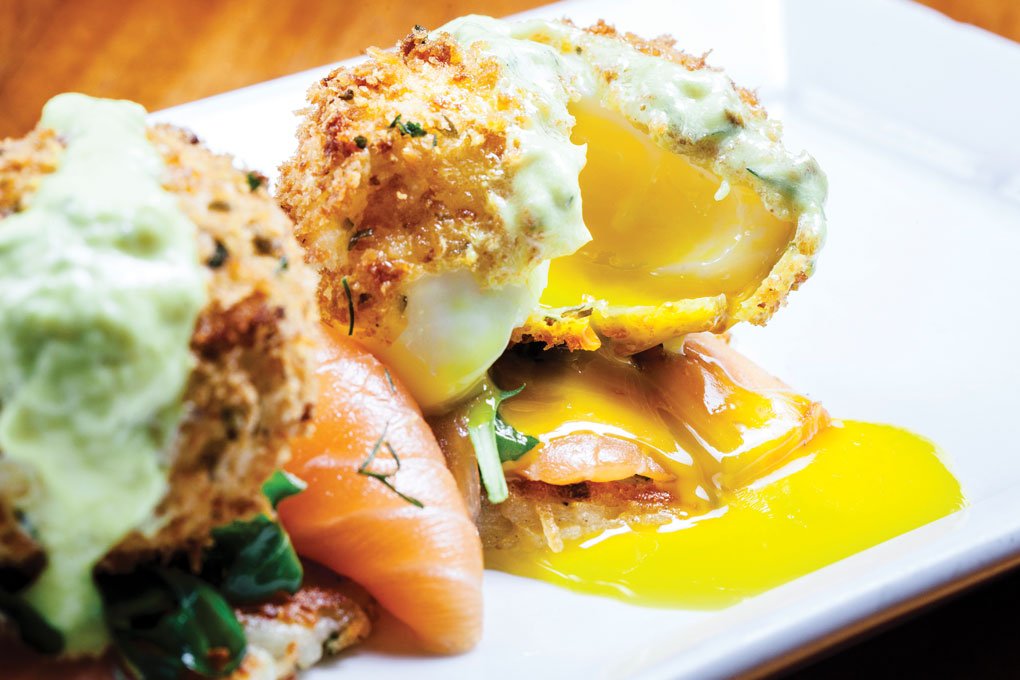 The breakfast and brunch categories are two of the most exciting spaces to watch in foodservice today. Chefs are showing remarkable creativity here, energized by a consumer who is embracing big, brash flavors.

There is an important anchor that tethers this enthusiasm: familiarity. At breakfast and brunch, that encompasses a big universe—everything from waffles to hashes.

But this category also holds a fast pass to acceptance via an ingredient that delivers familiarity no matter how exotic the build: the egg. Dishes like shakshuka and savory grain bowls become a safe culinary adventure, thanks to the welcome presence of a breakfast staple.

1. Salmon As The Star

A bagel with lox is not a newcomer to breakfast, but thanks to the modern seafood trend, chefs are elevating their game, showcasing salmon in creative applications. From upgrades to Benedicts to pulling in smoked and cured salmon in unexpected places, there’s lots of opportunity here. At RM Seafood in Las Vegas, the brunch menu stars a dish simply called “Salmon,” with house-cured salmon, a caper-crusted egg and potato latke.

We’ve seen savory porridge take hold on some menus, set in motion by a fascination with Asian flavors and builds. We’re now seeing grain-based bowls push beyond lunchtime and into breakfast and brunch, promising a wholesome, satisfying base with any number of toppings—perhaps crowned with an egg to ensure breakfast messaging.

Chilaquiles and huevos rancheros are two flavor-packed breakfast dishes that are showing up on eclectic menus. Chefs are tapping into their bold flavor stories, understanding that they resonate because they spell “comfort food” in any language. Chilaquiles start with a base of corn tortilla strips, simmered with green or red salsa and finished with queso fresco, crema and maybe raw onion and avocado. Huevos rancheros, or rancher’s eggs, make a hearty, homey dish, with fried corn tortillas topped with fried eggs and hot salsa. Variations on the themes lead to menu differentiation. As evidence, look to the Chilaquiles Benedict at Snooze, based in Denver, which includes barbacoa beef over a stack of ranchero-sauced tortillas and melted cheese, with poached cage-free eggs, roasted poblano hollandaise, pico de gallo and Cotija.

A power-packed Hawaiian import that’s now practically a breakfast staple for West Coast Millennials and Gen Z’ers, smoothie bowls are making their way onto mainstream menus. Boasting power from a base of superfoods like açai or pitaya (also called dragon fruit), along with other nutrient-rich ingredients, the appeal comes from its wholesome profile that really knocks it out of the park with cool flavors and visually striking builds.

Thanks to spiked interest in modern Southern dishes, where mash-ups inform traditional recipes, chicken and waffles have been gracing breakfast and brunch menus for a while now. Propelled by the surging popularity of fried chicken, chefs are innovating around this classic pairing, subbing out the waffles for other starchy fare, or innovating around the waffle batter itself. At Café du Parc at the Willard InterContinental in Washington, D.C., Peter Laufer, executive chef, serves a Waffle Fried Chicken: butterflied chicken breast dipped in waffle batter, cooked on a waffle iron, served with maple-balsamic vinaigrette.

A twist on a Southern classic: The chicken breast is inside the waffle in the Waffle Fried Chicken at the Café du Parc in Washington, D.C.

This brunch classic serves up a fantastic platform for clever innovation. Like a sandwich or a taco, eggs Benedict almost begs for creative play, with adventurous brunch-goers egging on the artistic interpretations here. At Dime Store in Detroit, General Tso’s Benny sees a base of steamed
rice cakes topped with two poached eggs, crispy fried chicken tossed with General Tso sauce and broccoli, finished with hollandaise.

The Hog and The Egg combines pork belly with poached eggs and hollandaise at Burlock Coast Seafare & Spirits in Fort Lauderdale, Fla.

Much like chicken and waffles, the Southern classic grits, often buddied up to shrimp, is finding a home on breakfast and brunch menus. Chefs are turning to grits for their comfort-food cred, then moving them in any direction that fits their morning-themed menus, pulling in both unexpected proteins and assertive global flavors. As evidence, look to Jam in Chicago. Its Lamb & Grits boasts braised lamb neck, merguez, Jimmy Red grits, poached egg, romanesco, chermoula and American Grana. Then there’s the Harissa Shrimp & Grits served at Rice in Washington, D.C., with coddled egg, charred peppers and six-month-aged manchego.

Grits get dressed up in the Shrimp & Grits offered at Parks & Rec Diner in Detroit, with housemade popcorn grits, harissa and hot sauce.

Although artisan toast was pegged by some as a hipster fad, it has proven itself as a sustaining menu item in both breakfast/brunch and the shareables categories. Chefs are now upping the ante, showcasing a world of flavors that speak to today’s broader trend of modern, inventive combinations. Avocado toast is still king, but add-ons have become more sophisticated and creative.

Another breakfast/brunch staple, today’s innovation in French toast calls for mindful construction, with every element given a creative upgrade, including fun inclusions, decadent stuffings and unexpected crusts and finishes. Cereal crusts are demonstrating a playful way to add texture. At Hook & Spear in the Marriott Newport Beach, Calif., the Crunchy French Toast is crusted in Corn Flakes, and served with strawberries and bananas. And at City Winery in Nashville, Tenn., the Frosted Flakes Pain Perdu sees brioche crusted with that kid-favorite cereal, then topped with maple-macerated black pepper berries.

Yogurt is a natural at breakfast, of course, but like modern bowls, the trend leans toward thoughtful attention paid to each element. Not to be confused with yogurt parfaits, modern yogurt bowls boast global touches or unexpected flavors—still with the promise of a wholesome, tangy yogurt experience. At Henley in Nashville, Tenn., RJ Cooper, executive chef, menus Goat Yogurt and Muesli topped with macerated berries and bee pollen.

The artistic Goat Yogurt and Muesli bowl at Henley in Nashville, Tenn., showcases berries, mint and bee pollen atop a yogurt base.

Shakshuka, that Middle Eastern braised breakfast dish, is proving the Sriracha theory—that even when something is tricky to pronounce, if it’s got a good flavor story, consumers will embrace it. Chefs are tapping into this dish’s comfort-food profile and morphing it to fit their brands’ DNA. Shakshuka’s hip status is also opening up the doors to a larger braised/baked eggs category, where the potential for signature takes is endless. At Toups South in New Orleans, the Farm Eggs in Purgatory dish illustrates this. It’s prepared with andouille sausage and a jalapeño-tomato braise, then served in a skillet with toasted ciabatta. 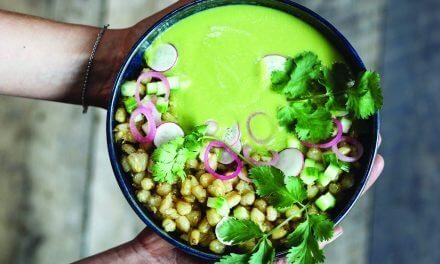