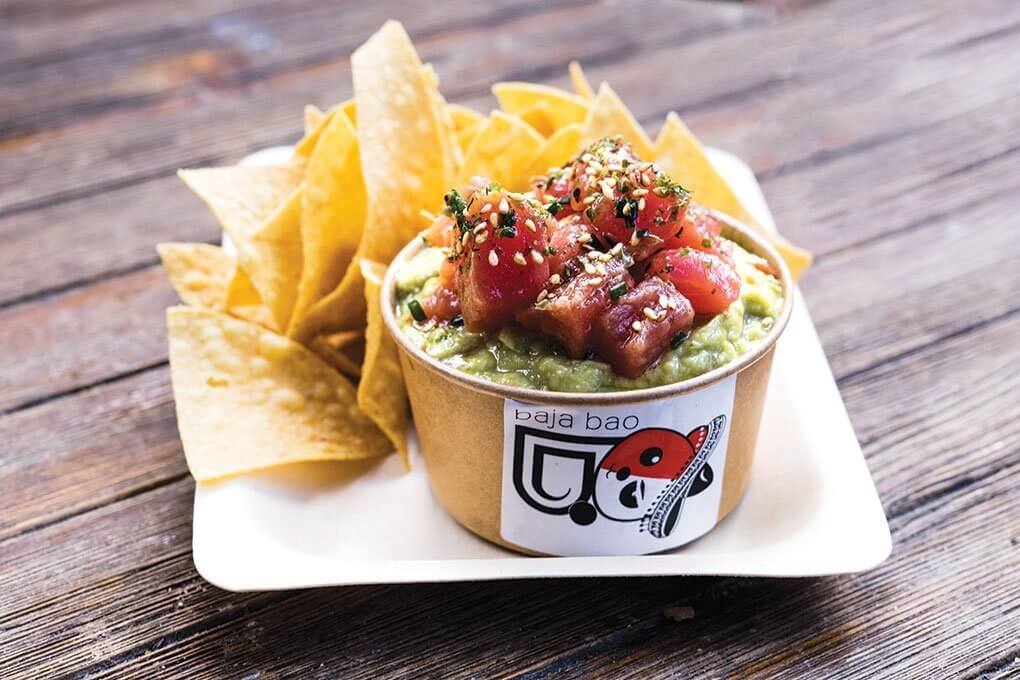 The seafood category offers a great snapshot of innovation as a whole in modern foodservice, where global ingredients, flavor complexity and creative combinations are driving trial and building business. Inspired menus are showcasing seafood’s pristine, premium character, positioning it in a casual, relaxed posture. Here are 12 categories where opportunities abound, helping answer the call for new and exciting while satisfying a desire for wholesome protein choices.

Poke has lost its “otherness” in many markets, now becoming a viable option for lunch, particularly in a customizable bowl format. Now that this marinated fish is embraced by a number of consumers, what’s the next step? Poke moves seamlessly as a wholesome protein option over salads, tucked into tacos, tumbled over artisan toast—even giving a premium lift to nachos.

2 Seafood In a Bowl

Salmon and tuna in particular seem to have found a welcome home in bowl builds, often added as a premium protein in the customizable world of fast casuals. Flavor detail is important, and as the opportunity widens, bowls starring seafood are popping up in segments outside of fast casual, working as wholesome lunch and brunch options.

3 Seafood That Takes the Cake

Seafood cakes have long been a staple of seafood-focused restaurants. Today, their flavor stories have moved beyond the East Coast tradition, serving as a great carrier for other compelling flavor combinations. At Bonchon Chicken, a fried chicken fast casual, the tteokbokki is a main dish featuring rice cakes and fish cakes simmered with scallions and onions in Bonchon hot sauce, topped with mozzarella and kimari (seaweed rolls).

Captain D’s Grilled Alaska Salmon Cakes star wild-caught salmon, bread crumbs, red pepper and scallion. The cakes are offered as both an entrée or as an add-on to a customizable meal.

It seems that there’s been a surge in ceviches and crudos on menus, thanks in part to their shareability, ease of signaturization and clean flavor profiles. Raw and cured seafood in general also got the green light from consumers, who signaled interest when they embraced poke with such enthusiasm.

Seacuterie is giving charcuterie a run for its money, stealing the idea of curing and preserving and applying it to seafood in intriguing, head-turning presentations. PB Catch in Palm Beach, Fla., piques guest curiosity with items like octopus torchon and salmon pastrami. Restaurants across the country are tapping preserved seafood, looking to this kind of curated, memorable shareable to help deliver a singular experience.

Caviar seems to want to join in the modern casual movement, offering up its briny, popping deliciousness to menu options beyond blinis and forma tastings. Chef David Chang is helping propel the trend. His Momofuku Noodle Bar in New York serves a Caviar and Fried Chicken Meal, pairing cold fried chicken with caviar.

Petrossian in West Hollywood, Calif., turns to the perfect french fry as a carrier for two kinds of caviar, a drizzle of crème fraîche and a finish of chives.

Long a popular item in Asia, fish collars are just now starting to pop up on more menus in the United States. Prized for their rich, meaty flavor, chefs are showcasing them in various ways, using everything from salmon and halibut to yellowtail, grilling, smoking or simmering them with great effect.

Chef Arthur Gonzalez features catch-of-the-day fish collar on the menu at Roe Seafood in Long Beach, Calif., seasoning it with a proprietary seven-spice blend and topping it with a sesame slaw.

Calamari is still king of the cephalopod hill, but octopus is seeing a lot more play on menus. It definitely has plate presentation locked up, impressing with its curling tentacles and uneven surface—perfect for picking up glazes and chars. Chefs are roasting, grilling, braising and poaching it—using flavor combinations that express the menu’s personality.

At The Mockingbird in Nashville, the What’s Kraken? deftly combines the octopus and toast trends.

Thanks to that ever-loving combination of crispy, salty and fatty, fried seafood has always been a thing. Today, the opportunity looks beyond the beloved popcorn shrimp and fried calamari, creating singular experiences that still answer that primal call for craveability.

Tasty, and boasting a rich concentration of omega-3 oils, fish skins are being played up for their “Wow!” factor, either served as a bar snack or used as a unique textural element in bowls, salads and entrées. In Sausalito, Calif., Fish restaurant menus a fish skin chicharrones, dusted in fennel pollen.

A bowl of mussels served with crostini, or even a classic shrimp cocktail, have always had a place on shareable menus. But today, the game is sharper, more intense, calling for creative takes on shareable shellfish—pulling from global pantries or extending familiar flavor systems in inviting, memorable ways.