October is National Seafood Month—a time to celebrate not just all things salty, scaled, and shelled but also the systems that bring them to our tables. In the United States, we have a deep history of fisheries, as it was one of the principle economies upon which a young nation was founded. We should honor the legacy of what is truly America’s first heirloom food—seafood—by looking ahead to the future.

Globally, seafood demand is expected to triple by 2050. In the United States, health experts recommend we eat a lot more seafood. While wild-capture fisheries will continue to produce a significant percentage of our seafood, they cannot provide for the growth needed. And that brings me to the theme of this issue: aquaculture—the farming of seafood—and the role chefs can play in supporting the evolution of delicious and sustainable food systems.

Aquaculture is relatively new in our culinary world, and not without controversy. But here’s the deal: we need aquaculture and I’ll argue that we should want it, too. From an environmental perspective it offers some great benefits. Sure, we can sustainably farm animals on land, but cows, chickens, pigs, etc., all fight gravity and spend energy keeping their blood warm.

All of this requires a lot of energy from the food they eat and a lot of land and fresh water to produce that food. Conversely, farming fish can be an efficient way to produce protein, and lots of it. Why? Because fish are cold blooded and they float. As we grapple with the profound question of how we are going to feed an expected population of 9 billion people, it makes good sense that we use these efficiencies and take better advantage of the 71 percent of this planet that is water.

As championed by the United Nations Food and Agriculture Organization, by increasing the scale of global aquaculture we can create significant economic opportunity, provide needed nutrition, and evangelize entire new populations of environmental stewards.

Let me emphasize that farming seafood is a really cool opportunity; the last time humans got to invent a food system was 10,000 years ago when we invented agriculture and planted the seeds of modern society. We are, at this moment, the architects of a new food system, and we as chefs have a prominent voice when discussing how we want to build it.

The same pioneering spirit that seeded America’s identity now echoes in our opportunity to explore our blue bounty. And believe it or not, there is vastly more America under water than there is above it. In this issue, we are honored to present a message from Michael Rubino, senior advisor for seafood strategy for National Oceanic and Atmospheric Administration Fisheries, sharing the potential for U.S. aquaculture to drive sustainability and innovation, not only here, but in all oceans.

Aquaculture at commercial scale is a very young industry, despite being an ancient practice. The United States has a long history of families farming trout on their land to supply their own tables. But it wasn’t until the 1950s that it grew to be a national commercial industry. Farmed salmon is often held up as the poster fish of the aquaculture industry, but it didn’t exist until the late 1960s, and global expansion only took off in the mid-1980s. Catfish, America’s largest sector of aquaculture by volume, grew to scale just over three decades ago.

It’s a complicated undertaking to create entire systems in which life can thrive. It has taken some trial and error, mistakes have been made, and ethics have not always been followed. Yes, early aquaculture rightly earned negative press coverage and general skepticism of this emerging industry. Though aquaculture has evolved significantly and now produces over 50 percent of all the seafood we eat, the industry still doesn’t have widespread social support.

A recent survey of chefs reported that 56 percent held neutral or negative perspectives on farmed seafood. This reflects a legacy bias embedded in our culinary culture in part because of people like myself who used to campaign that it was all “farmed and dangerous.” But as I learned more and witnessed positive changes, my perception did too.

And I’m not alone. In this issue, we asked chefs across the country to share stories of their experiences with farmed seafood and the dishes it inspired.

I’m not suggesting we give the industry a free pass. There’s still work to be done. But as in any industry there are bad actors that can discredit the whole, and there are good actors who pioneer best practices. Simply put, bad actors should get better or we should refuse to buy their products.

But those who are committed to improvement are worthy of our support. Innovations are happening all over the globe, and not just in the expected places. In our home waters you’ll find branzino in Connecticut, salmon in West Virginia and Florida, yellowtail in Maine, redfish in Texas, striped bass in Baja, and even shrimp in Minnesota.

It is worth taking a pause to state that wild fisheries must endure. The square-shouldered New England fleet, graceful silhouettes of shrimp boats seen from Gulf shores, and salmon fisheries of the First Nations people are as fundamental to our national identity as the cowboy of Western lore or the family farms of the American landscape.

We’ve proven that we can fish sustainably under science-based management as we have in the United States. We’ve proven that we can work to restore once-depleted fisheries such as those of Pacific rockfish. I believe that we should fish to the extent allowed under proper management. There is an opportunity in aquaculture to take advantage of, however, there is also ongoing and passionate debate about the co-existence of wild and farmed seafood.

In recent decades, the U.S. market has been inundated by a flood of low-priced farmed seafood produced overseas where, in some cases, lax regulations allow for cost savings but poor environmental practices on the farms. This competition has forced a devaluation of wild-capture seafood even as domestic fleets admirably adhered to strict management standards, faced declining abundance of fish stocks, rising fuel costs, and crippling commercial and residential development of vital working waterfront infrastructure.

In my opinion, fishermen are right to feel threatened and angry. But aquaculture itself is not the problem. We cannot convict an entire industry. The solution is not to shun aquaculture but rather to demand and support responsible aquaculture. Properly raised seafood, wild and farmed, requires us as chefs to pay a price that respects the true value of the product and includes the cost of producing safe and quality seafood by employing environmental and fair labor best practices.

But the biggest issue facing U.S. fisheries is far easier to wrap our brains around and one that chefs are uniquely positioned to address. Americans currently consume far less seafood than what health experts recommend. More sustainable seafood consumption will lead to healthier populations, more resilient ecosystems and new economic opportunities.

Chefs can take the helm on this issue by evangelizing increased consumption of seafood. As chefs we have adopted and championed the ethics of heirloom vegetables and animals, and local food systems. Sustainability as an operating principle is now as fundamental in the modern kitchen and culinary education as French technique. We have learned the language through which we communicate these values to our staff, guests and suppliers. It’s not a stretch to apply it to seafood.

But let’s not forget an essential part of this conversation: that seafood is a delicious ingredient category offering near infinite variety of taste, texture, color, provenance and story for us to explore and proudly serve. As chefs, we love to scour markets for quality among every category of ingredient, and we make decisions based on a calculus of our menu, costs, skills, regions, cuisines, etc.

But there’s one factor that shouldn’t enter into the seafood equation. Let’s drop the pretense that seafood is a divided category: wild vs. farmed. Both are quality options for seafood.

Let’s aspire to know more about seafood and to serve more of it. Let’s envision it as an essential part of our story as we evolve as culinarians and stewards of the environment and our communities here and abroad. So as we embark into National Seafood Month, let’s embrace the next great wave of culinary discovery just beneath the horizon, swimming in a tide of delicious opportunity.

Barton Seaver is on a mission to restore our relationship with the ocean, the land, and with each other—through dinner. He has translated his illustrious career as a chef into his leadership in the area of sustainable seafood innovations. Barton is a firm believer that human health depends on the health of the ocean and that the best way to connect the two is at the dinner table. 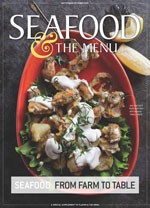 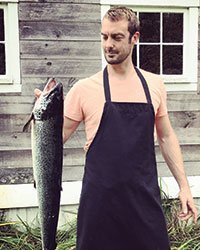 Barton Seaver is on a mission to restore our relationship with the ocean, the land, and with each other—through dinner. He has translated his illustrious career as a chef into his leadership in the area of sustainable seafood innovations. Barton is a firm believer that human health depends on the health of the ocean and that the best way to connect the two is at the dinner table.