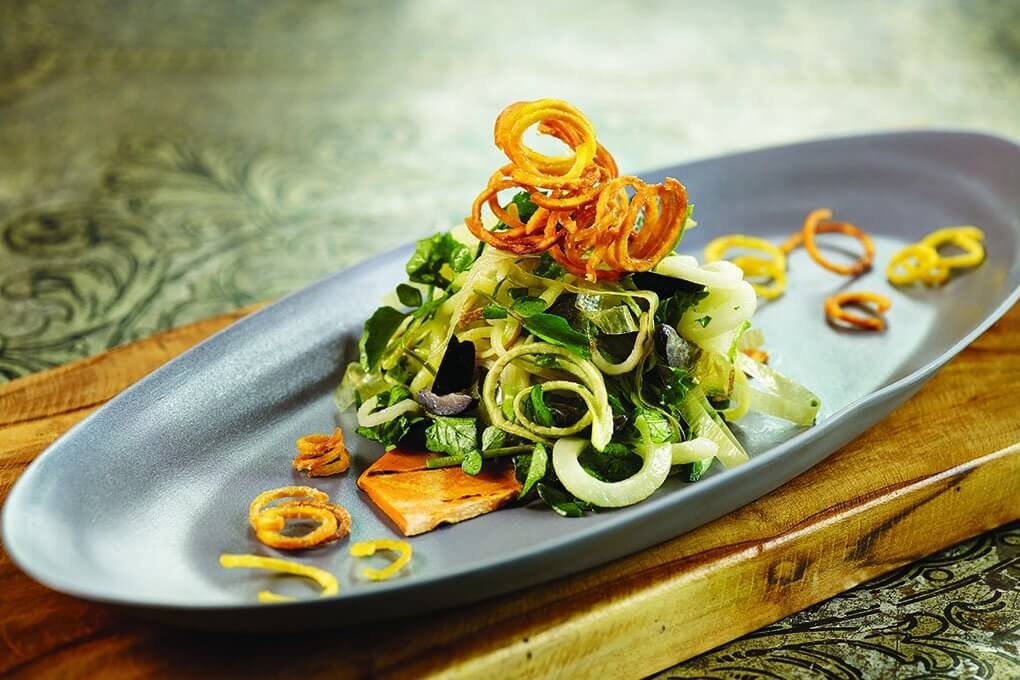 As chefs continue to find more creative ways to menu produce, they are increasingly turning to elevated techniques. Veg-centric dishes have flourished, thanks to flavor-building cooking methods like roasting and charring, or bathing in a bagna càuda, or perhaps enriching with a strategic dollop of soft cheese. Prep technique is also coming into play beautifully, with chefs relying on the trend in spiralizing and shaving produce to highlight its textural advantage, playfulness and height, be it in a bar bite, side or main dish.

“Today, vegetables are the heroes of the plate, particularly in polished casual, our competitive space,” says Michael Slavin, VP of culinary & menu innovation for the Houlihan’s, J. Gilbert’s Wood-Fired Steak and Bristol Seafood concepts, based in Leawood, Kan. “It was inevitable that this trend would take hold because there are only so many ways you can grill a vegetable.”

Katie Sutton, VP of culinary innovation for Food & Drink Resources, a culinary consultancy in Centennial, Colo., agrees. “In the last year or two this trend has really taken off as restaurants have become more veg-centric, by which I mean they feature meat, but don’t make it the focus of the plate. Add gluten-free demands and the result is that chefs are focusing more on trying to do different things with vegetables.” Another factor propelling exploration of spiralized and shaved produce is the continued consumer demand for wholesome, flavorful choices.

Spiralizing and shaving produce are compelling techniques in today’s modern landscape, where inventive flavor and nuanced textural contrast are now a customer expectation. Compared to dicing, for instance, a spiralized version of that same zucchini or carrot can yield more flavor-carrying potential and plate coverage, not to mention enhanced visual appeal. There’s also big opportunity for impact with shaved vegetables or fruit. The technique adds whispers of flavor and texture, punctuating modern bowl builds, pastas, bar bites and shareables with finesse. And it gives a new spin on salads. As evidence, look to Indigo Grill in San Diego, which menus a Shaved Pear & Apple Salad with wild arugula, candied almonds, grilled Oaxaca cheese and a pear vinaigrette.

Datassential points to untapped opportunity with this trend, marking consumer awareness “high” but operator adoption “moderate,” at only 10 percent. “Given that 53 percent of consumers say they’re likely to try vegetables prepared in this way in a restaurant setting, it’s a culinary space in which forward-thinking operators should feel empowered to experiment,” says Kyle Chamberlin, project manager at Datassential.

At Romacorp, Inc., the Orlando, Fla.-based parent company of Tony Roma’s and TR Fire Grill, Salmon & Zoodles (spiralized zucchini) made its menu debut in 2015 and has remained on offer ever since. “When we first created Salmon & Zoodles, we were just trying to get off the mainstream techniques for how chefs typically serve salmon,” says Bob Gallagher, Romacorp’s senior VP of culinary. The zucchini “noodles” are lightly sautéed for a tender bite. Diners loved the dish, and the culinary team quickly realized Zoodles worked just as well with other lighter proteins, such as chicken, scallops and shrimp.

There are two key factors when it comes to spiralizing zucchini, says Gallagher. The first is the size of the vegetable you’re using (smaller is better), and the second is the pressure you use when you spiralize. “We use a mandoline to spiralize the zucchini, and we don’t use the center part where the seeds are, because that’s where most of the zucchini’s moisture is, and that part doesn’t hold its texture as well,” he says. Zoodles have become a signature item for TR Fire Grill, ranking in the top three in sales.

Spiralized produce is used at Red White and Basil, an Italian pasta bar in Washington, D.C., where diners can build a bowl, selecting from 10 varieties of housemade “noodles” that include spiralized butternut squash, carrots and sweet potato. The gastropub Uglyduckling, in Brooklyn, N.Y., features a vegetable entrée made with carrot “noodles,” and Pure Fare in Philadelphia menus butternut squash “noodles” with baked chicken and chard.