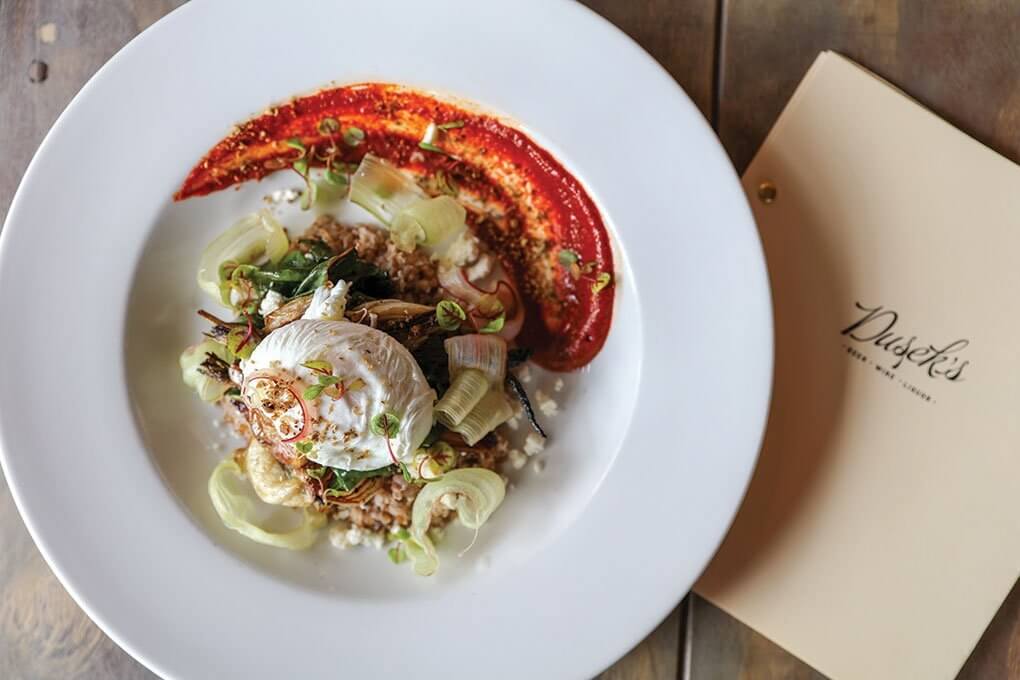 Spring onion, rhubarb and barbecued carrot make the Warm Grain Salad at Dusek’s in Chicago stand out, with accents of feta, egg and almond dukkah.
PHOTO CREDIT: Dusek’s Board & Beer

The veg-centric movement built the road that led to a world of stunning innovation in vegetable cookery. Chefs have mastered craveability in this category, fueling their efforts through strategic use of umami-rich protein—from dollops of ’nduja to glazes of bagna càuda. Veg-centricity has paved the way to a new era of plant-forward cuisine, where everything from beans and legumes to fruits and vegetables are given serious flavor treatment so they can take center stage in menu development.

Before, any type of “plant-based” terminology used to appeal mostly to vegans, vegetarians and so-called “health nuts.” Now, it signals nutrient-rich, real, modern food. But like everything else on the menu, plant-forward dishes have to keep flavor in deep, steady focus.

Here are 12 ways into the trend, all serving up creativity and craveability with every delicious forkful.

Thanks to the full-throated consumer support of hummus, plant-based purées are finding their way onto more menus today, either as shareables or components of a bowl build, entrée or salad. From a black bean hummus topped with blistered salsa to a swipe of sweet pea purée under a grilled flank steak, purées offer a playground of both texture and wholesomeness.

Tacos have proven themselves as versatile carriers, welcoming global mash-ups and New American builds with open arms. Chefs are exploiting their popularity, often using them to introduce bolder flavors or play off of familiar flavor systems. Plant-forward versions feature taco fillings like roasted peewee potatoes, mole-glazed carrots, and, of course, beans of all kind.

Beet Carpaccio at One Market in San Francisco demonstrates how well vegetables can hold their own on a plate.

Sides are a crucial component in modern menu development, often stepping in as shareables. Or, when playing the side show to an entrée, they’re now expected to do heavy lifting in the surprise-and-delight realm. This is where the glory of veg-centricity shines, and chefs pull out all the stops in coaxing out flavor. At One Market in San Francisco, the Beet Carpaccio wows with paper-thin beets, radishes, fresh chèvre, and sherry vinaigrette.

Expectations in the burger realm are through the roof, thanks to the excitement around breakout brands offering patties that attempt to mimic the experience of a meat-centric burger. Diners looking for a plant-based burger are not willing to trade down on the flavor experience, so chefs are answering with clever, delicious takes that satisfy.

Like veg-centricity, bowls are a movement unto themselves, with innovation requiring all sorts of mindful flavor combinations, including a serious focus on plant-forward foods. Whether the bowls are build-your-own or curated, the expectation is that the options are loaded with flavor, from hearth-roasted harissa carrots to slow-simmered black beans.

Miso eggplant and mushroom combine for an umami-laden bowl at Sweetfin.

It makes sense that the next iteration of nutrient-dense beverages includes whole grains, especially considering our collective embrace of global beverages and ingredients. In South Korea, misugaru is a drink made with coffee, milk, rice, barley, beans, corn, millet and sesame seeds. It’s early days for adaptation here, but given the trend in functional eating and gut health, smoothies and shakes fortified with quinoa or barley don’t seem far-fetched anymore.

Today, the texture game is more important than ever, where every element on the plate needs to wow. Chefs are demonstrating the textural power of plant-based ingredients, with clever garnishes like popped sorghum in a salad or crispy farro over pasta.

Popped quinoa adds crispy texture to the chocolate mousse at Tanta in Chicago.

It wasn’t really that long ago that the only cream options at a coffee shop were whole milk or skim. Now, soy, almond and coconut milk are commonplace, with oat milk slowly emerging as the next barista darling. Nut milks are also adding their wholesome profile and creamy texture to soups, smoothies and sauces, extending the plant-forward messaging seamlessly.

All hail the zoodle! The zucchini “noodle,” propelled through the blogosphere and adapted by foodservice, acts as a great ambassador here: colorful ribbons of produce that provide texture, height and visual appeal. So much opportunity for spiralized signaturization: carrots, mango, cucumber, radish, apple, celeriac, beets, pear and more.

The breakfast category is so exciting to watch, thanks to the dining consumer’s embrace of bold flavors, global mash-ups—really anything that helps launch their day with a spring in their step. The opportunity with plant-forward here is clear, leading with the health-and-wellness story, then coloring it in with craveable combinations.

11 Toasts with the Most

The toast trend is alive and kicking, illustrating staying power with its versatility and wide consumer appeal. Of course, avocado still rules the plant-forward roost here, but other stars of the veg-centric movement fit quite nicely into this platform. Creative spins on toast take root in the breakfast space as well, naturally, where featuring produce fits well into a fuel-focused meal part.

Smoked carrot lox and vegetable-cashew cream cheese sit atop toast at The Drawing Board in Petaluma, Calif.

If there’s any doubt that plant-forward foods belong at the bar, look to the shishito pepper. Or the Brussels sprout. They champion the opportunity here, standing out with fantastic flavor touches and aggressive cooking techniques. With so many diners wanting to eat sociably, sharing plates of all kinds, dishes built around plants signal freshness, premium positioning and craftsmanship.