Hummus With Heart Best of Flavor 2017 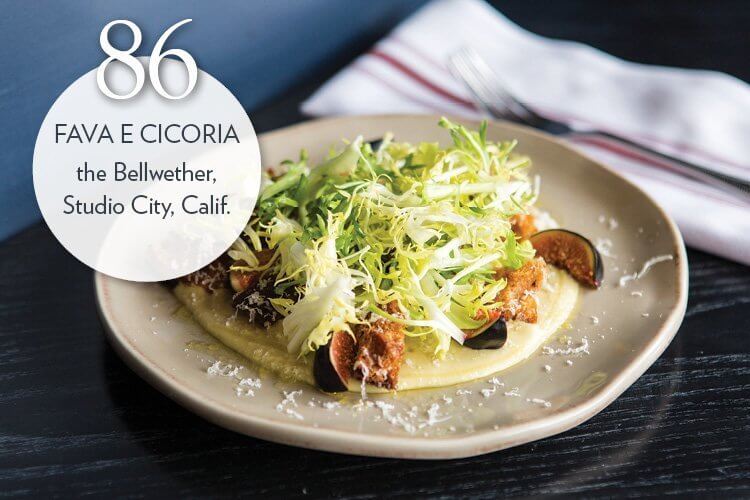 Sometimes childhood memories translate into menu successes, especially when they elevate the dish and fall into an emerging trend. Ted Hopson, Executive Chef/Owner of this modern American concept, has created a mindful, modern salad in his Fava e Cicoria by tapping into beloved food memories. “When I was a kid, my grandmother would make this purée, and we would take a walk and pick wild chicories,” he says. “Then we would sit down with fruits and dip, and eat and be merry. As an adult, whenever I travel to Manduria in southern Italy, where my family is from, this is still a staple food. It makes the eating feel so communal, almost like a hummus and dip, except the more Italian version of it.”

Hopson wanted to serve up that food memory as a dish at The Bellwether. “I have tried to make this dish multiple times at different restaurants, but it never came together. Finally, I realized it’s okay to be rustic; it’s okay to do the food I want. Honestly, I didn’t expect people to love it as much as they do!,” he says. “I think when you show people food that comes from the heart, they can pick up on it. I was so worried the dish would flop, and it became one of our better selling items. Diners would comment about how they’d never had that combination before.”

To reimagine this dish, he took all of the parts and tried to upgrade each one, altering the traditional recipe in doing so. He cooks the fava beans until tender, then emulsifies olive oil into the purée to give it a buttery texture. “We add Parmigiano-Reggiano to add natural umami. To increase the richness, we float a good amount of an amazing extra-virgin olive oil, estate-produced, bottled and AOC-certified in France. It literally tastes like liquid butter,” Hopson says.

“Traditionally, this dish is served much like a hummus. In my new version, we just kept building it up into a salad. So on top of that purée, we add these super crunchy bread chunks from a toasted pain au levain.” He adds seasonal fruit, like figs or grapes, then frisée dressed in lemon juice crowns the dish. “Because this dish started as a peasant dish in Italy, it was made to be flexible. There isn’t really a wrong way to eat it.” The dish is also a menu success because of its pleasing composition. “It really hits all flavors and textures—rich and funky fava purée, crispy bread, savory cheese, sweet fruits, bitter lettuces,” he says. “It is one of those dishes that just has it all.”