Hooked on Fried Chefs are upping their fried seafood game 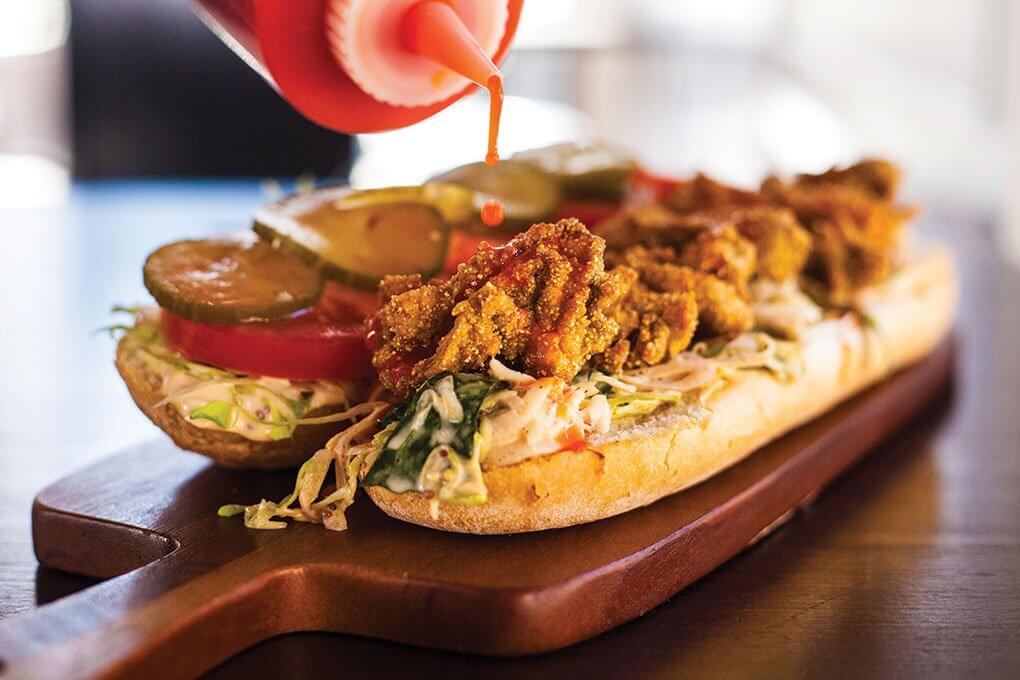 Consumers craving indulgence often turn to fried seafood for that unrivaled experience of a delicate, crispy exterior juxtaposed with a tender and mild center. Increasingly, fried seafood entrées, appetizers and snacks function as canvases for chefs to showcase the global flavors and creative combinations that diners demand.

While the classics in this category, such as deep-fried calamari or fish and chips, continue to capture interest, unique breadings, global sauces, inventive formats and sustainable sourcing paint a picture of the elevated fried seafood landscape of the future.

Breading or batter is what makes fried seafood identifiable. Often, a light touch helps keep the seafood the star. “Not all fried items have to be heavy and coated in batter to the point where the item is unrecognizable,” says Mary Bass, chef of the soon-to-open boat-to-table restaurant Katie’s Seafood House in Galveston, Texas.

Rob Corliss, executive chef of fast casual Unforked in Overland Park, Kan., and founder of consulting firm All Things Epicurean, echoes this sentiment: “You want the breading to serve a secondary role; whatever you’ve breaded should be the star.”

Preux & Proper, an upscale Southern concept in Los Angeles, menus a Southern Fried Mississippi Catfish, one of the restaurant’s most popular dishes. Executive Chef Sammy Monsour dredges the catfish in cornmeal flour, then marinates it in buttermilk and eggs. It’s deep fried, seasoned with celery salt, and served with a red rémoulade and housemade deep-fried pickles. “We present it in the best way we know how with the best ingredients, but it’s still identifiable as a really good plate of fried fish,” he says.

Japanese influences continue to expand in the fried fish category as well, with panko seeing an increase of 31 percent on fried seafood menus since 2013. Tempura appeared on 13 percent of fried seafood menus in 2017, per Datassential. The Tempura Tilapia at Unforked features a light tempura-battered tilapia that is pre-fried and then deep fried to order, pairing a crunchy exterior and moist fish with a chipotle napa slaw that brings smokiness and creaminess to the table.

As panko and tempura become more prevalent in fried seafood applications, other unique breading treatments are on the rise, too. Mary Bass and Katie Sutton both report seeing more operators use rice, cassava, sorghum, buckwheat and coconut flours to differentiate their fried fish applications, as well as making breadings and batters with unique and functional elements like quinoa flakes and flax.

In that vein, from 2013 to 2017, Datassential reports high growth in potato-crusted (up 40 percent), pistachio-crusted (up 75 percent) and tortilla-crusted (up 36 percent) breadings for fried seafood.

Chefs can tap into the continued growth of global flavor mash-ups through a pathway of batters and spice blends. San Diego’s Masala Street does this by merging British and Indian cuisines with its Koliwada Fish-N-Chips, battered in chickpea flour and served with pickled aïoli.

While innovation around unique breadings continues, classic beer batter remains a constant. Beer-battered dishes benefit from highlighting craftsmanship and regionality. At Pittsburgh’s Gandy Dancer Saloon, for instance, the IPA Fish & Chips is battered with a Pittsburgh-brewed IPA and comes with housemade tartar sauce—both of which elevate the dish by telling a local story and highlighting attention to detail.

Leaning in to the veg-centric trend, Sharky’s will soon blend the cabbage with Brussels sprouts, a move that fits the concept’s wholesome brand, he says. When developing a new item or updating an old one like this, Goldstein employs a “Triangle of Balance:” Can the item be executed well by your team, is it received well by your guests, and is it profitable? Since fried fish tacos are an indulgent item, Goldstein also points to the importance of using fresh ingredients and clean oil to balance fried dishes with high quality.

While fried shrimp and calamari are the two most menued fried seafood dishes, they have declined over the last four years, signaling that the market is ripe for elevated takes on these classics as well as new and adventurous fried fish appetizers. Operators can bolster these familiar dishes with global spins.

There’s also ample room to feature unexpected fried fish appetizers, as The Folly in New York does with Salted Cod Tater Tots. The item—one of the restaurant’s top five overall sellers—capitalizes on the familiar and craveable tater tot, but signaturizes it by stuffing the potato with salt cod and frying it, then serving the tots with sides of sambal and housemade tartar sauce.

“The lesson is that everyone likes something that’s familiar but unique,” says owner Aron Watman. The dish also exemplifies the need to innovate within your brand. “We’re more of a gastropub. We want to have classic crowd pleasers, but with a twist. This fits perfectly with our concept,” he says.

Katie’s Seafood House, set to open in September, will feature several po’ boys on the menu. Says Bass, “They’ll have standard breading but with unique twists to the accompaniments with global-inspired ingredients, from the slaws to the sauces and garnishes, like a coconut curry and a cumin-vinegar-based Latin slaw, papaya chutney, chimichurri, and Oaxacan sesame sauce.”

Tartar, Aïoli, Sriracha and other sauces

Sauces provide a safe way for consumers to try new flavors and for operators to experiment—and the options are limitless. “Fried foods can go with bright, acidic, sour flavors, but they can also have a place with creamy flavors,” says Corliss.

The Fish Market, with six locations in California, offers a Fried Fish Sandwich featuring a malt-vinegar aïoli, for instance, while 189 by Dominique Ansel in Los Angeles menus an octopus corn dog featuring gochujang aïoli. At Pennsylvania 6 in Washington, D.C., crab croquettes move into brunch with the help of a citrus hollandaise, served over the popular Crab Eggs Benedict.

Classic tartar reigns supreme in fried fish applications, but enthusiasm for complex, global fare is driving the rise of new sauces in the category. Aïoli is one of the fastest growing sauces across all seafood entrées. Datassential reports that it has grown by 44 percent since 2013 in fried fish dishes and can be found on 11 percent of fried fish menus.

The Sriracha trend shows no signs of slowing down, growing by 240 percent on fried fish menus in the last four years. And Sriracha mayo is the fastest growing sauce in the fried fish category, boasting a 664 percent growth over the last four years, says Datassential. Other seafood-friendly globally inspired sauces on the rise include chimichurri, salsa verde and coconut curry.

Sustainably raised and caught seafood is a growing expectation in a consumer culture that increasingly prizes ethical sourcing, but it seems that sustainable claims are generally reserved for fillets or whole seafood items, while fried seafood tends to fly under the sourcing radar. With consumers continuing to demonstrate that sustainability is a value that drives ordering decisions, this is a missed opportunity. In fact, only

1 percent of fried seafood menus feature the term “sustainable,” according to Datassential’s 2017 research. Using sustainably sourced and harvested seafood in fried items not only deepens the perceived value, but helps tell a compelling story. And not only is it good for the environment, but customers are willing to pay for it. According to the Monterey Bay Aquarium Seafood Watch, more than half of U.S. consumers say that buying sustainable seafood is personally important.

Some operators understand this, touting sustainability across their menu—including in their fried offerings. Preux & Proper uses sustainably sourced fish in its $22 entrée of Fried Mississippi Catfish with a cornmeal crust, and its $15 Po’ Boy, found on its bar bites menu and sporting either fried shrimp or fried oysters. “I grew up with a fried fish sandwich costing $4, so to me this is very expensive,” says Sammy Monsour, who is a member of the Monterey Bay Aquarium Blue Ribbon Task Force. “But now I know where the food comes from, and I understand the cost associated with it.”

So do a growing number of consumers. “Nobody walks away feeling like it wasn’t worth the cost,” says Monsour. “If you source responsibly and ethically and you cook with integrity, the marketplace is currently willing to support that.”

To express his support for a healthy ocean, Monsour highlights the importance of balanced buying. He buys fish from local fisheries in Los Angeles, domestic fisheries in the Texas Gulf, and foreign markets off the shores of Vietnam. “Buying from everywhere with calculated decisions helps you support the bigger picture in what sustainable seafood is, and, ultimately, promote a healthier ocean in doing so.”

In addition to increasing the value of dishes, sustainability delivers the transparency consumers seek. When it opens in September, Katie’s Seafood House will use fish from the Gulf Wild network of fishermen. Each piece of fish is labeled so that anyone can see where it was caught, by whom, the type of bait used, and information about the species. “The current generation of diners wants to know more and more about the seafood they are consuming,” says Bass.

Sustainability can also tell a story. “That’s one of the biggest connection points you have with your consumers,” says Rob Corliss. Guests crave meals that double as memorable experiences, and sharing a fish’s sustainable journey from the sea to the plate is one way to deliver.

A look at what’s on fried seafood menus and what’s poised for continued growth provides a road map for auspicious development in this popular space. Embrace intriguing breadings and global flavors to create flavor-forward dishes, communicating sustainability practices along the way.

Employing David Goldstein’s Triangle of Balance, ask yourself if a new dish can be executed well by your team, is received well by your guests, and is profitable. If the answer is “yes” to all three, you may have a successful new fried seafood application on your hands.