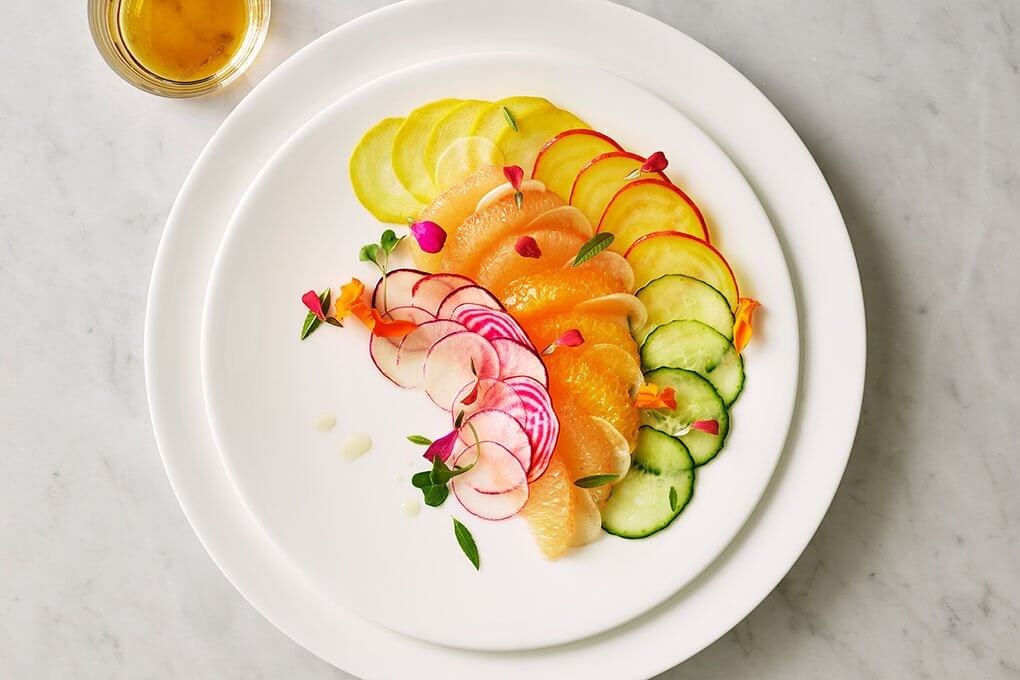 Vegetable-forward presentation is huge on menus. As we all know, it’s moved beyond innovation and into its own movement called veg-centricity. Of course, vegetables have always been critical to culinary development. They have been the base colors from which to build complex flavor profiles, textural palettes and visual impact. In the past, however, vegetables have generally played supporting roles to the protein star of the dinner. Whether as à la carte sides or plated accompaniments, vegetables were previously meant to round out a “healthy meal” and offer reprieve to your palate while consuming a large serving of meat. Those days are solidly over for a growing share of foodservice operators, with vegetables taking a larger role in plate design, co-starring rather than serving as extras.

Operators are increasingly designing dishes that pull produce forward to share space with proteins, or even carry a dish on their own. Vegetable-centric innovation has moved beyond an imperative for wholesome dishes. Rather, these new veg-centric creations are flavor forward. Often leveraging traditional meat preparations such as confit, roasting and grilling, the dishes never lose the identity of the vegetables. Instead, the unique characteristics are celebrated; flavors are enhanced and highlighted to stunning effect. Consider this vegetarianism for the masses, or perhaps the dawn of a new age of produce.

Produce has often played a role in traditional breakfast dishes such as omelettes, but the new veg-centric breakfast menu plays with produce in new formats and introduces items not typically found on a breakfast menu.

While Americans often overstate their healthy behavior, breakfast continues to be the daypart at which consumers will try to eat better. Produce is at the heart of building out a dish that enjoys a health halo, and one that will likely deliver on that promise. Increasingly, a variety of produce items can be found in breakfast applications, a trend likely to grow.

Menu-building opportunities in the toast category continue to grow, thanks to the great success of avocado toast, inviting other veg-centric iterations that leverage the familiar form while optimizing its incredible versatility and malleability.

Veg-centric toasts offer healthful options that are often anchored by rich ingredients such as avocado, butter or hummus. Toast with premium or innovative toppings plays to the comfort of this traditional breakfast item, while amping up the taste, texture and wholesomeness.

Until recently, the vegetarian sandwich on many menus was often a collection of raw or cooked vegetables—appealing, but not necessarily innovative. A trend in today’s produce-forward sandwiches seeks to create a meat-like experience without shying away from their vegetable roots.

Sandwiches are one of the great equalizers in American cuisine. A well-designed sandwich can be appealing to nearly any consumer, whether it has meat or not. For the meat-eating patron, creating a protein-like experience can heighten satisfaction emotionally and physically. But simulating a meat experience is not to say the sandwich apologizes for its vegetable focus.

Americans are serious about burgers, and creating an alternative burger is not a task that can be taken lightly. Plant-based versions, along with classic burgers enriched with mushrooms, are finding favor, thanks to serious attention to both flavor and the overall eating experience.

Burgers are one of the most popular items in American foodservice, so efforts to offer plant-based options are both a noble and monumental endeavor. Encouraging vegetarians and vegans to try these alternative burgers is one thing, but luring the meat-eating burger public is quite another.

As the darling format of today, bowls have their origins in the veg-centric movement, inspired by world cuisines that focus on bowl-friendly formats. Produce shines here—pickled, caramelized, spiralized, charred, grilled—the more varied the better.

Most consumers now know that the average Mexican dish served in America is probably less authentic or culturally accurate. While the “burritos as big as your head” formats are often heavy on animal protein, new options either reduce or eliminate the meat, reflecting a modern aesthetic that draws both from seasonality and regionality.

Ranging from authentic to innovative, modern veg-centric Mexican entrées not only seek to create new experiences within the cuisine’s category, but also shift the perception of Mexican cuisine as “heavy.” Leveraging the popularity of traditional formats such as tacos, burritos, quesadillas and flautas, veg-centric Mexican entrées keep the high-impact flavor profiles while reducing the heft of the originals.

While there are already veg-forward options among the most familiar pizzas, today’s choices are often more creative and intriguing. Flatbreads and other new formats tend to offer unexpected produce toppings, or ones that have been given a more complex flavor profile.

Many operators are looking at ways to reimagine pizza. Intriguing preparations of vegetables are a natural fit for this innovation. The results are typically lighter, offering big visual impact and unique flavor profile.

If operators are looking to create unique, veg-centric dishes, small plates and appetizers are the perfect place to start. Served in sizes that facilitate sharing, they help allay consumer concerns with ordering outside their comfort zone. Today, vegetables like Brussels sprouts or green beans often star as bar bites—the pathway to success here lies in thoughtful flavor technique.

Operators can typically be more innovative on this part of the menu, and veg-centric design has benefited as a result. Additionally, produce-forward appetizers and small plates may be perceived as more wholesome than other options, making it more appealing for mindful consumers to add an order to their meal.

New entrées are throwing the traditional meat/sides/starch design out the window. Rather, these modern entrées use no set template to create inspirational and wholly satisfying main dishes, giving as much attention to vegetable cookery as they do to protein.

Entrées laden with a variety of vegetables are visually impactful and promise a rich textural experience. While these dishes can easily fall into the “healthy” section of the menu, and are often vegetarian or vegan-friendly, the key is that these modern entrées are designed to be appealing to all.

The sides section of the menu has typically been dominated by produce. More chefs are moving away from the steamed, flavor-lacking vegetable sides of the past, using flavor and technique to make them into menu stars.

Side dishes have increased in importance on many menus, with operators tightening up the entrée section in favor of expanded side options. Whether shareable or individual portions, unique veg-centric sides can effectively compete for attention with main entrées.

Vegetables are so much more than the forgotten side whose role is to make people feel better about the healthfulness of their meal. No longer the also-ran to protein’s starring role, vegetables are the driver for some of the most exciting innovation happening in foodservice today.

And why not? Nothing is more visually stunning than a fresh-from-the-vine tomato or a well-prepared eggplant. Vegetables offer not only a rainbow of color possibilities but also an almost endless array of textural options. Increasing the vegetable presence in a dish can create a greater healthful perception while also increasing the perceived value by giving the dish greater heft and plate coverage, often without significantly increasing the cost or diminishing the profit margin. Furthermore, Americans continue to learn how to better leverage vegetables to create incredibly satisfying veg-centric items, thanks to the growing breadth of world cuisines—many of which treat vegetables as the star.

Consider how to increase the presence of vegetables on your menu, either by mindfully adding them to current items or introducing new options.