From Brazil with Love Best of Flavor 2017 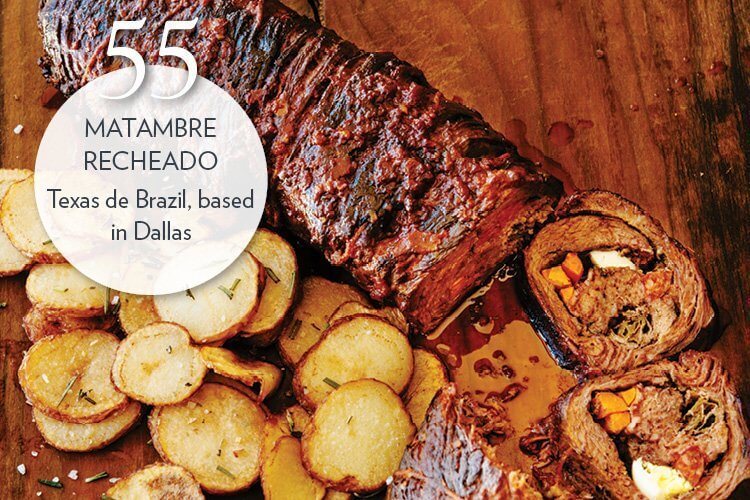 Brazil takes pride in its grilled meats, and the American consumer has embraced that tradition in concepts like Texas de Brazil. This authentic Brazilian-American churrascaria serves up items like picanha, a top sirloin cut crusted in salt and grilled on sword-like skewers, then carved tableside. Evandro Caragnato, Culinary Director, is a native Brazilian gaucho. Although his Matambre Recheado isn’t on the menu, he says it represents the heart of rustic gaucho cuisine—so much so that he features it in his cookbook, Churrasco: Grilling the Brazilian Way (Gibbs Smith, 2016), which stars recipes from his homeland and from Texas de Brazil.

“I have a sentimental connection with this dish,” he says. “Gauchos love beef and preparing and eating churrasco, an assortment of skewered beef cuts cooked over charcoal, simply seasoned with rock salt. It’s the go-to food for celebrations or family gatherings. But when I was a child, the matambre was my favorite food, and my mom would often prepare it for me, especially as a reward if I got good grades.”

Matambre is a braised rolled beef that’s stuffed with ground beef, onions, carrots, sausage, eggs, bacon and scallions. It’s rolled and tied, seared to form a crust, then braised for three hours in tomato sauce. For service, it’s sliced and served with the rich sauce. He says the meat can also be sliced thinly for sandwich use. “You need a good searing and to work carefully with the heat and liquid evaporation for a perfect sauce and tender meat.” Ideally, he says, the recipe calls for “rose meat,” also known as “suadero,” a muscle that lies outside of the carcass and spans from the chuck to the flank. “It can be done with flat cuts like skirt or flank steak, but the real matambre is with rose meat,” he says. Although it’s a labor of love, he says it’s worth it. “You may not get it right the first time,” says Caragnato. “But when you do, you will know that you did something really extraordinary.”