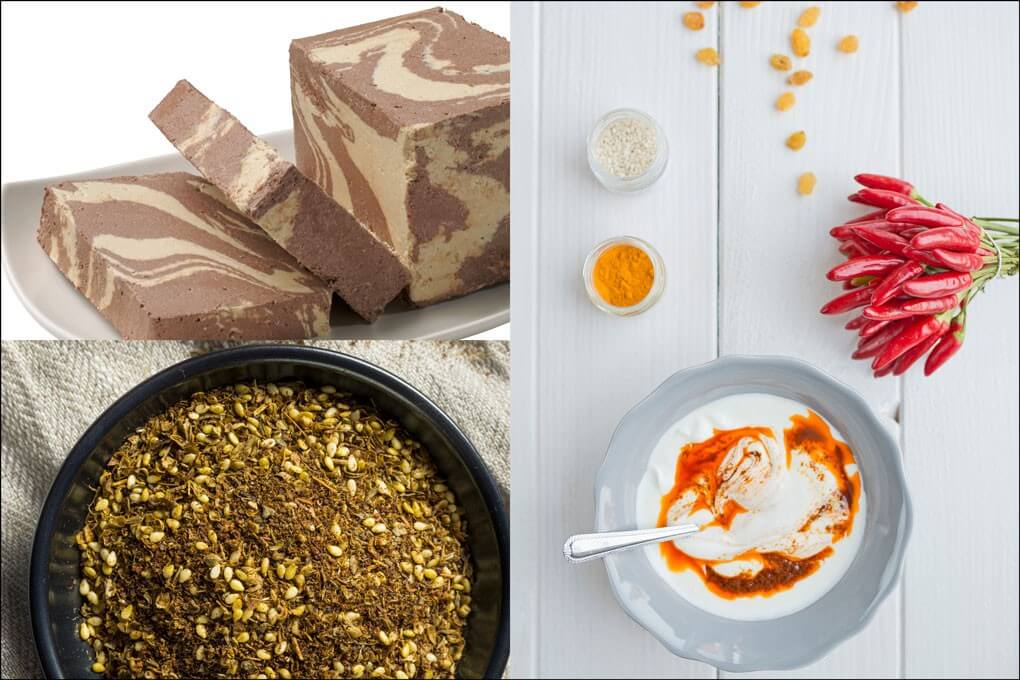 As the pantry of the Eastern Mediterranean regions gains more attention among U.S. chefs, look for ingredients like halvah, za’atar and harissa to see more menu play.

Just like cardamom, coriander and ginger can lend well to a variety of cuisines, there’s more than one way to integrate these flavor-forward Eastern Mediterranean spices onto your menu. Adam Moore, chef and founder of Chicago-based foodservice consulting firm Flashpoint Innovation, offers his take on five star ingredients from this red-hot region.

“I think of it as a spicier, Yemeni-style chimichurri that works well with beef and lamb, blending into neutral bases like chickpeas and tahini—especially using tahini paste to tone down the spiciness and bring a nutty sweetness. For the American palate, which might find the s’chug too spicy, adding tahini mellows it out.”

“This blend of sumac, sesame seed and herbs is great as a topical seasoning. It’s extremely flexible—another reason why it’s really popular. It can be used as an ingredient across items like beans, legumes, chips, bread, or mixed into dishes like soups and stews.”

“I’ve seen this Tunisian chile paste mixed into hummus as another layer of flavor. It’s also used successfully as a rub or marinade on meat. Because it’s a paste/sauce, I can use it by itself or as part of a vinaigrette or sauce (same is true for s’chug). For instance, I’ll add harissa to a vinaigrette for an eggplant-based salad or zucchini- and squash-based salad with halloumi or feta. Or I’ll mix it into yogurt. Not only does it have heat, but also some great acidity. When I use harissa or s’chug, I think of items that would benefit from a stronger flavor boost—that’s why you see them a lot with neutral ingredients like eggplant or potatoes. You need that acidity to make the dish craveable.”

“My favorite halvah (a base of tahini with sugar) is one that’s like stracciatella, with chocolate chunks folded in. Halvah has a peanut buttery, light texture. So when you think of dishes that contain peanut butter—simply mixing chunks into a soft serve or creating a peanut butter (or halvah cup)—there’s a lot of potential application.”

“This is like a traditional molasses, but with more of an acidic undernote to it. It’s not quite as bitter, not super sweet—it has a nice acidic tone that makes it a very flexible savory and sweet ingredient. I’ve used it in marinades, dressings, as a simple light brushing onto meats or a syrup drizzled over dessert.”

Carly Fisher is an award-winning Brooklyn, N.Y.-based journalist and author whose work has been featured in GQ, CNN, Fodor’s Travel, Bon Appétit, Food & Wine, Saveur and NBC. She is currently working on her first book through The Countryman Press, due out in 2019. carlyafisher@gmail.com

Carly Fisher is an award-winning Brooklyn, N.Y.-based journalist and author whose work has been featured in GQ, CNN, Fodor’s Travel, Bon Appétit, Food & Wine, Saveur and NBC. She is currently working on her first book through The Countryman Press, due out in 2019. carlyafisher@gmail.com