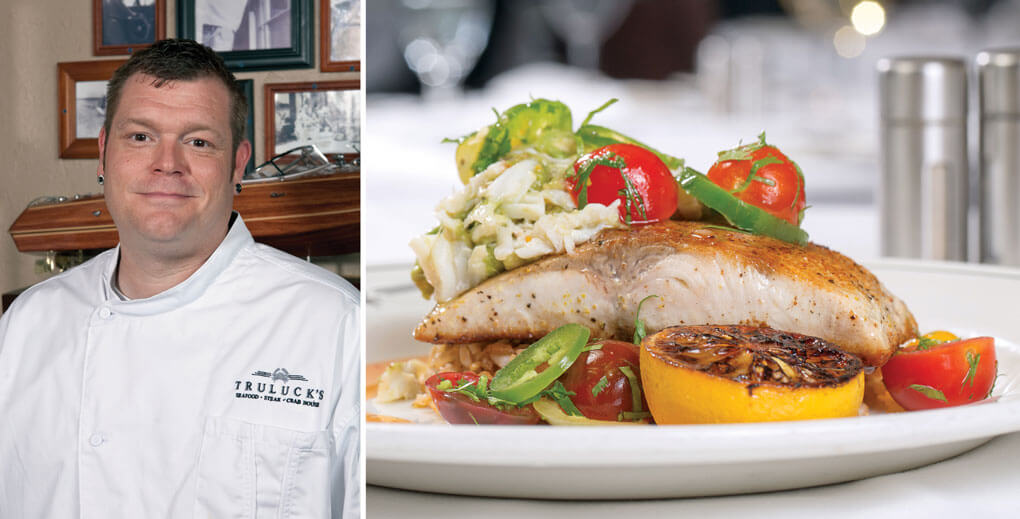 The Sweet and Spicy Yellowtail at Truluck’s is paired with familiar ingredients—crabmeat, avocado, heirloom tomatoes and rice pilaf.

Seeing where and how his food is produced is vital to Brian Wubbena. “I like to go out there and physically check them out—to Iceland for char, New Zealand for salmon and abalone among other things, and the Netherlands for yellowtail. Then the product becomes not just something we bought off a shelf, but something we believe in,” he says.

While this firsthand knowledge leads to loyal customers at Truluck’s, they still ask about seafood sourcing. “We frequently have guests ask, ‘What’s wild?’,” he says. “I don’t think that’s the right question to ask, but we never tell a guest their perception is wrong. Instead, we explain the story behind the fish we’re serving. The best aquaculture producers are more like artisan crafters, rather than a machine.”

Truluck’s serves a farmed Dutch yellowtail in a composed sweet-and-spicy dish, served with crab, guacamole, heirloom tomato, garlic and cilantro. Another particularly popular way he serves it is with truffled corn bisque, green beans, frisée and bacon bits. “The product itself is a beautiful showcase, absolutely delicious, but when serving a new fish, the dish has to be interesting on its own. The composition of the dish has to be the driver when guests aren’t completely familiar with a particular fish.”

FIF: Lots to Cluck About Chefs are flying high with poultry