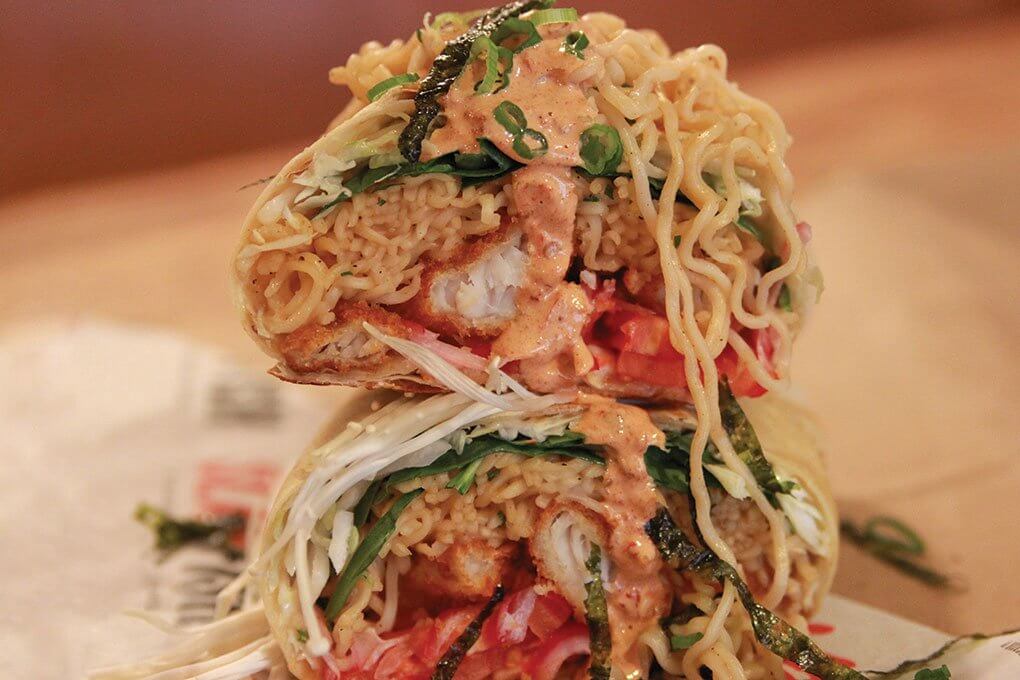 Slapfish serves up this Lobster Ramen Burrito as an LTO during Lent, employing a tactic of menuing unique, over-the-top dishes as a way to garner more attention.
PHOTO CREDIT: Slapfish

It’s a different world today in seafood menu development. It has become part of the modern casual movement, with Baja fish tacos leading the charge a number of years back. Casual, flavor-forward offerings have long since replaced the more traditional plates of baked fish adorned with lemon slices. Now, chowder fries and smoked trout dip are hip bar snacks.

Lunchtime sees “market seafood” rice bowls with furikake and bonito flakes. Dinner might start with seacuterie—preserved seafood dishes like salmon pastrami and pickled shrimp—then move into an entrée of miso-lacquered black cod adorned with a soft egg and nori. And the innovation possibilities are endless.

“Seafood is the most interesting, diverse category from a culinary standpoint, with incredible potential to grow,” says Barton Seaver, chef and author of seven books, including American Seafood: Heritage, Culture & Cookery From Sea to Shining Sea (Sterling Epicure, 2017). “We, as chefs, need to respond to increasing customer interest in seafood.”

What better springboard for seafood innovation than Lent? Not only is seafood consumption up during that 40-day period of reflection in the Christian calendar (running from early March to mid-April next year), but there’s a general uptick in excitement around seafood. It is momentum, built through demand and promotion. “It’s a period of time when guests are inherently more open about seafood,” says Seaver. “Lent is a perfect time to advance seafood development, using that momentum to inform menus year-round.”

Lent is also a chance for operators to capture share and deepen their seafood credibility. “For most brands, it’s about bringing in sales from new guests and expanding their culinary integrity in this category,” says Montina Filice, strategist with The Culinary Edge, a culinary consultancy based in San Francisco. A pathway to success follows two strategies that walk hand-in-hand today: flavor and sustainability. “The opportunity isn’t just around a cod promotion for Lent,” she says. “It’s about trend-forward ingredients and values that consumers care about. Seafood is the next frontier in sourcing vocabulary.”

To round out its lunch offerings, Brown Bag Seafood Co. in Chicago added a Seared Tuna Salad with sesame-soy vinaigrette to its summer menu.

Two wildly successful fast casuals — Slapfish, based in Huntington Beach, Calif., and Brown Bag Seafood Co., based in Chicago — run similar game plans when it comes to menuing sustainable seafood in a casual, flavor-forward way. But for Lent, they run very different promotions, even though both clearly leverage their status as seafood experts in garnering more business during that time. Outside of Lent, both seafood places hang their hat on the convergence of flavor and mindful sourcing.

Slapfish, with 16 restaurants nationwide, employs a philosophy that says: “It’s the dish, not the fish.” This isn’t to say that the species menued aren’t important, but it positions flavor and familiarity above all else. Andrew Gruel, founder/CEO, understands that Slapfish is serving a clientele that is mostly looking for fast, familiar and delicious fare. “They want tacos and fish sandwiches, and, more recently, bowls,” he says.

Slapfish delivers, with items like the Ultimate Fish Taco, a two-handed fish taco, grilled or crispy, with cabbage, “awesome sauce” and pickled onion. He hooks his guests with flavor, then underscores sustainability with a messaging based around honesty. “For us, it’s about trust in sourcing, so our mantra is: ‘honest flippin’ seafood,’” says Gruel.

“We build our menu around the architecture of dishes, so for tacos, it’s about crunch, fat and acidity. We can plug any species into that, like lionfish, tilapia, salmon, haddock. Our customers are coming for the flavor combinations, and they also feel good about their choice because they trust us.”

Slapfish’s success indicates that Gruel is onto something—a strategy that other concepts can certainly emulate, during Lent and beyond.

At Brown Bag Seafood Co., a fast casual with four restaurants in Chicago and another slated for the new year, Donna Lee, founder/CEO, hangs her strategy on flavor wrapped tightly in the convenience of the lunchtime scene. “Our guests’ flavor preferences are based on the landscape of getting through their workday,” she says. “Our frequent customers want their food to fit their lifestyle and adhere to their dietary goals. And they’re really looking for approachable flavors.”

Among a choice of salads, tacos, sandwiches, “veggie boxes” and “powerboxes,” the latter is by far the most popular. Consisting of a blend of ancient grains served over spinach, guests choose their protein, from the daily catch to crispy cod to teriyaki-scallion salmon. “As far as which species is most popular, it’s the daily catch,” says Lee. “That ranges from Alaskan cod, wahoo, hake, lake perch, mahi and more. Salmon is a permanent resident on our menu. There’s an inherent trust in our brand, so they are comfortable with our daily selections, knowing they’re getting a pristine product in a flavorful dish.”

Kathy Casey­—chef and mixologist who owns Kathy Casey Food Studios-Liquid Kitchen in Seattle, specializing in food, beverage and concept development—is opening a chef-driven fish-and-chips quick serve at Seattle-Tacoma Airport next year, answering a demand for flavorful, casual seafood. Her menu reflects a thoroughly modern sensibility—one that demonstrates sound strategy both during Lent and for the rest of the year.

“We’re offering new- and old-school seafood dishes that stand out with creative twists,” she says. She’ll be sourcing an Alaskan white fish of some kind, battered and coated in panko for a crispy crunch, served with a choice of housemade sauces. “We’re also answering the demand for a variety of portion sizes, with fillets that are either two, three or four ounces,” says Casey. “We want to showcase the best seafood in a quick and flavorful way.”

All three of these concepts illustrate a strategy that signals what the average dining consumer is looking for when it comes to seafood.

Brown Bag Seafood Co.’s most popular menu item—even more than tacos—is its “powerbox,” with a base of ancient grains and fresh spinach, and a choice of seafood.

Brown Bag and Slapfish employ different strategies when it comes to Lent. “Every day is Lent here,” quips Lee. “But during Lent, we use social media to remind our customers and potential customers that we have about 70 menu SKUs that work within Lenten dietary restrictions.”

Slapfish treats Lent as its Super Bowl. “It’s the most important time of year for us,” says Gruel. “Every year, we get to prove ourselves to a whole new group of consumers.” Although Slapfish doesn’t call out Lenten promotions, its LTO launch is strategically lined up with Lent. “Everyone is in the frame of mind to eat seafood, so it’s a great time to make a splash,” he says.

His approach? Shock and awe.

“We menu items that are over the top, positioning ourselves for new consumers with dishes they’ve seen nowhere else,” says Gruel. Last Lent, that took the form of a Lobster Ramen Burrito, boasting ramen noodles tossed in fish chowder sauce with sautéed shrimp, spinach and carrots, seasoned with furikake, then rolled up in a burrito and toasted. It performed very well and is now an off-menu offering that maintains buzz on social media.

Slapfish also ran an LTO of Hot Pot Fish Bites, starring fish trimmings that were double breaded, deep-fried and tossed in a scratch-made lemon-herb sauce. “It’s still early days for our 2019 Lenten plans, but we’re playing in the breakfast space, looking at something around shrimp and grits,” says Gruel.

“Our strategy for these promotions is to add seafood flair to popular formats, like nuggets and burritos. It works.”

Red Lobster features farm-raised Atlantic salmon as part of its “Today’s Catch” menu, prepared to order on a wood-fired grill.

Barton Seaver calls underutilized species, like dogfish and whiting and amberjack, “under-loved” fish. “We just haven’t figured out that we love them yet,” he says. “It’s a huge opportunity today, signaling a return to appreciating species that we aren’t fluent in, but we’re familiar with, like herring, mackerel, Pacific rockfish, sand dabs, whiting.

Fishermen aren’t catching them to their full allowable extent.” Sourcing and messaging around these underutilized species inherently helps the economic sustainability of fisheries. “We’ve created an irrational economy based on demand, not supply,” says Seaver.

For Lent and beyond, operators should take a look at these lesser-known fish. Not only do they generally help with the bottom line, they also help message sustainability. They tell a story about sourcing, fishermen and their livelihoods, and the abundance of the ocean. If linked closely to a great flavor story, it’s magic time. “From a practical side, chefs don’t have to learn how to cook 10 different species of fish,” says Seaver. “There are universal characteristics that different species share—flaky, oily and so on. Certainly there are nuances with each fish, but overall technique doesn’t vary.”

Red Lobster, a heritage brand based in Orlando, Fla., that celebrates 50 years next January, is the largest seafood restaurant in the world, boasting more than 700 units in North America. Although known for its classics, like live lobsters and Endless Shrimp promotions, the brand is also introducing lesser-known seafood to their guests.

“Part of our promotional process is to bring new species to the masses,” says Dustin Hilinski, director of culinary/executive chef. “We’ve introduced them to Argentine red shrimp, southern king crab, Jonah crab, and more. They see us as a seafood expert, so they trust us.” Red Lobster is expanding into lesser-known species as a strategy around differentiation. “We’re looking at all possibilities, including menuing invasive species and so-called ‘trash’ fish. We’re exploring at a test level.”

Creative flavor play, casual design and underlying messaging seem to be buoying opportunity in the seafood category today. Dipping a toe. Diving in. Either way—Lent and its open waters are a great place to launch modern innovation.