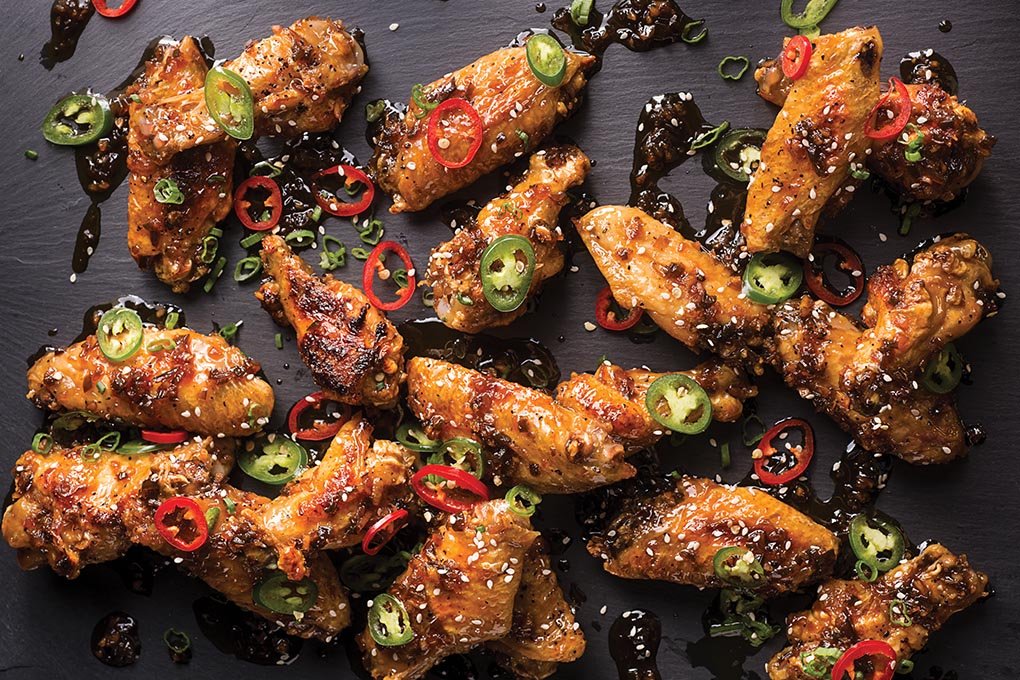 Modern wing presentations combine sweet with hot, tapping into trending flavors or mashing them up into new experiences

Chicken wings have always been great bar food. Fun, shareable, sticky, spicy, messy—and deeply connected to the American experience. With just the right combination of savory, fat, sweet and heat, they lock up craveability, too. The challenge is finding the right combination that speaks to modern sensibility while reflecting a brand’s personality.

“Mopho wings are craveable because they hit every note. They are sweet from the caramel, bright and pungent from the lime and ginger, spicy from the dried Thai chiles, and umami-rich from the fish sauce. Plus, we brine them to keep them moist and dredge them in rice flour to keep them crispy. It’s that quadruple flavor punch to the mouth that keeps people coming back.”
Michael Gulotta, Executive Chef MOPHO, New Orleans

Smoked flavors have become more prevalent on menus, from a mezcal-spiked cocktail to smoked butter, answering a demand for both complex flavor and attention to culinary detail. Wings, of course, are a natural for smoke, showcasing barbecue in many menu iterations, such as the Smoked Chicken Wings with Alabama white sauce at Fiery Ron’s Home Team BBQ, in Charleston, S.C.

At Firebirds Wood Fired Grill, based in Charlotte, N.C., Steve Sturm, corporate executive chef, menus Smoked Chicken Wings with Buffalo hot sauce, blue cheese and celery. “Our wings are packed with multiple layers of bold flavors in each bite. The first layer of flavor comes from smoking our wings, which also makes them tender,” he says. “Then, after we let them cool, we flash fry them to order and toss in our homemade wing sauce. All these flavors from smoking, frying and our sauce come together perfectly to create a craveable appetizer.”

Punch Bowl Social, a restaurant and entertainment concept based in Denver, pairs chicken wings with a sweet cilantro sauce.

“The inspiration for the cilantro sauce was to create a nontraditional wing sauce that shares the same flavor profile as a Korean barbecue sauce—sweet, savory and spicy—all blended into a craveable and approachable appetizer, great with a beer or on its own. The wings are a staple on an ever-changing menu at Punch Bowl Social. Wings have become a staple for many restaurants. It’s important to stand out. In a concept like Punch Bowl Social where we are trying to differentiate ourselves with our commitment to quality and flavor, we believe in applying that same ethos to something as simple as a chicken wing.”
Chris Cina, Culinary Operations Director, Punch Bowl Social, based in Denver

The glaze is the thing, really. Promising that sticky, rich flavor experience, chefs today are leveraging its built-in appeal while making it a signature marker for wings. Flavor combinations here are endless, from a cherry-habanero glaze to miso-ginger to Nashville hot to Buffalo teriyaki.

“In each bite, you’ll get the perfect balance of sweet, salty, garlicky, then finished with fresh squeezed lime juice to give each guest a nice citrus finish. Sticky soy garlic—who doesn’t love that?” The black pepper glaze combines black pepper, soy, garlic, lime juice—and the wings are garnished with chopped green onions.

Today’s wings have to deliver a flavor story that unravels beautifully and compels return visits. That means finding a balance between heat and sweet, savory and heat, or sweet and savory, all the while befitting a brand’s profile. Nuance is king, where complexity of flavor trumps scorching heat or cloying sweetness. Here are a few examples of modern takes: