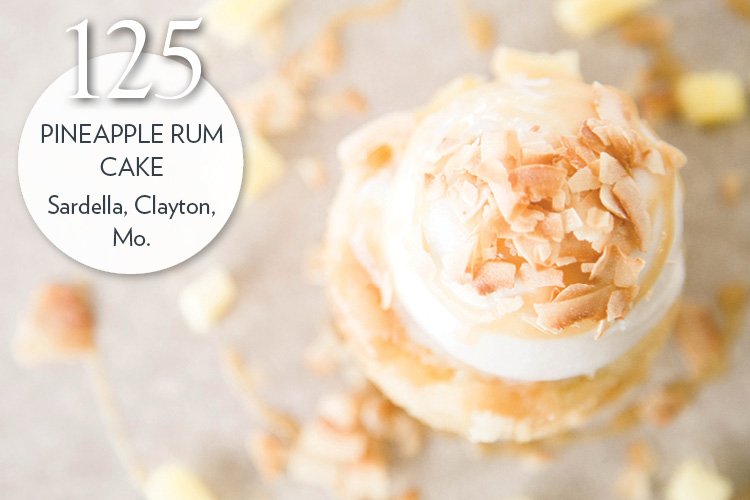 This build starts with a warm yeast cake with chunks of fresh pineapple infused with a rum-pineapple syrup. It’s topped with coconut sherbet, pineapple-caramel sauce and toasted coconut chips. “This is my take on a Rum Baba,” she says, recalling the liquor-soaked yeast cake that’s finished with whipped or pastry cream.

“Generally, when I think of rum, I think pineapple and tropical,” she says. “After a few attempts, I realized that fresh pineapple with a pineapple and rum syrup soak were the best way to go. It was a natural progression from there to top this warm pineapple cake with a coconut sherbet. I used coconut milk and shredded coconut to bring the most coconut flavor to the sherbet—while trying to avoid a ‘sunscreen’ flavor.”

Osborn believes this top-selling dessert is a hit because it’s a combination of these common tropical flavors presented in a less-common format. It has the added benefit of briefly transporting diners to exotic locales. “It satisfies their desire for a momentary trip to somewhere tropical with the flavors.” As seasons change, she comes up with new ways to approach the Pineapple Rum Cake’s flavor system. “I could see possibly bringing in a semifreddo instead of the sorbet, or having a caramelized pineapple tart in place of the cake,” she says. “The options with this dessert are really endless.”