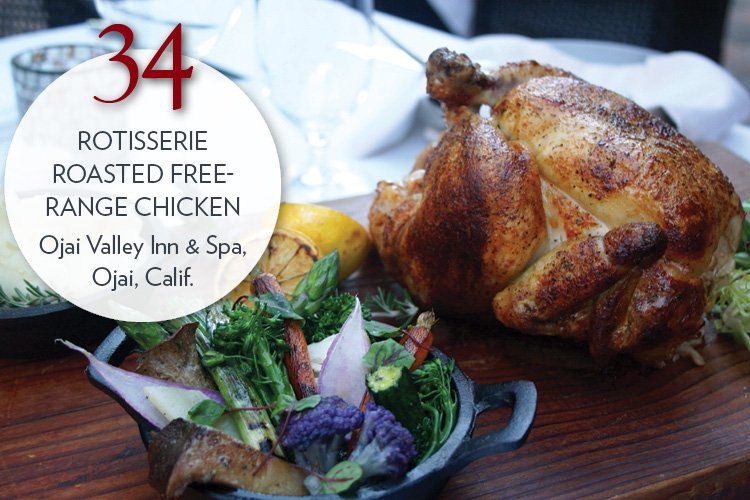 A perfectly roasted chicken is a universal favorite: comforting, homey and satisfying. Ojai Valley Inn & Spa’s restaurant The Oak has figured out how to deliver it consistently, to their customers’ delight. Executive Chef Truman Jones says that after purchasing a rotisserie oven for the three-meal period restaurant, the goal was to use the equipment in a way that represented its signature “Ojai Valley-to-table” philosophy—so they came up with the Rotisserie Roasted Free-Range Chicken with Estate Lemon and Rosemary.

The chicken comes from the local Jidori farms, and it’s brined for 24 hours before being spit-roasted in the specialized oven. The brine includes lemons and rosemary grown on site. “The rosemary and lemon really ground the dish to our region and give it a depth of flavor, and the chicken stays incredibly moist from being in the brine and from the cooking process,” says Jones. “Local Ojai honey adds a kiss of sweetness to the brine that rounds out the flavors.” The chicken is served with local, seasonal vegetables and buttery whipped potatoes.

“Once we finalized the recipes and the cooking process, we liked it so much we decided to use the rotisserie chicken for other applications,” says Jones. Those offerings include salads and chicken pot pie. “We’re also thinking of incorporating the chicken in our grab-and-go market, Libbey’s, in sandwiches, salads and picnics.”