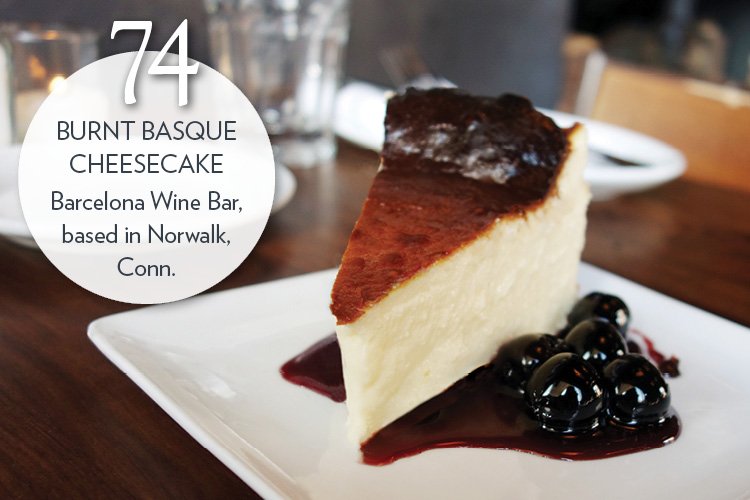 Chris Lee, Culinary Director of Barcelona Wine Bar, walked into a tiny pinxto bar called La Viña in the old quarter of San Sebastián, Spain. “It’s famous for its tarta de queso, a savory, fluffy cheesecake cloaked in a crisp, charred crust,” he says. “It’s not a traditional Basque dish; it was concocted by the family who has owned the shop since 1959. You’d be hard-pressed to find it anywhere else.”

Lee wanted to bring it stateside for this 13-unit tapas bar with influences from Spain and the Mediterranean, as well as South America. “We don’t know what exactly goes into the secret recipe, but we do know the cheesecake is baked at an extremely high temperature to thoroughly toast the outside while maintaining a light and creamy center,” he says.

After days of testing and tasting, the culinary team developed a sheep’s-cheese version that was pretty close to the original. “It isn’t super sweet—it tastes more cheesy than sugary. The crust has a deep caramelization, like créme brûlée. The presentation has a ‘Wow!’ factor when brought to the table, and it tastes like no other cheesecake you’ve ever had. The owner of La Viña insists the cheesecake be served plain, at room temperature, with only a glass of Pedro Ximenez sherry to accompany it. We think seasonal fruit or marmalade doesn’t hurt.”