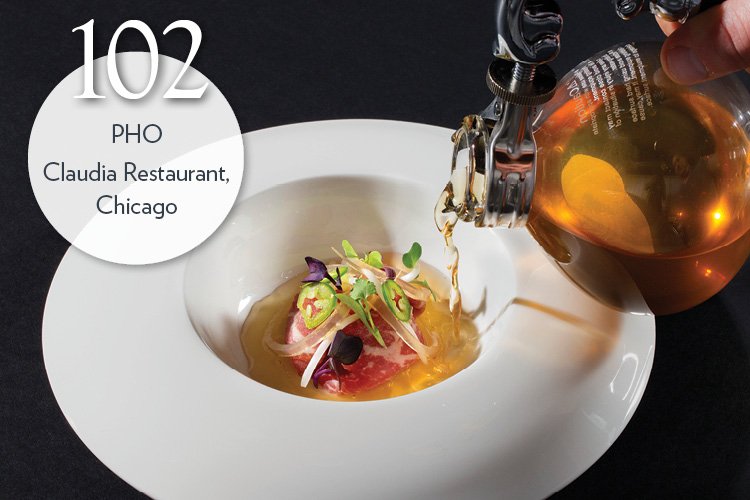 “Modern with a twist” is how Executive Chef Trevor Teich describes the cuisine at Claudia Restaurant, an elegant Chicago pop-up. So when he was ideating around pho, he took it to a refined level. “I start off by making a traditional broth of charred onions and ginger, oxtail and beef knuckles,” he says. “The broth is then clarified by freezing it and letting it thaw, which naturally separates the gelatin from the broth, turning it into golden consommé.”

He sets some of the consommé with agar and by forcing though a Japanese tokoroten mold, he creates “heat-proof noodles that have a luxurious texture and flavor that is unexpected.” He seasons the remaining consommé with sugar and barrel-aged fish sauce, then infuses it with Thai basil, limes, ginger and cilantro.

For service, thinly sliced Wagyu is placed in the center of the bowl with the noodles, bean sprouts, sliced jalapeño, micro cilantro and basil. The broth is poured over the raw beef to gently cook it in front of the guest. “It’s new to the spring menu, and has
been a big hit,” says Teich.