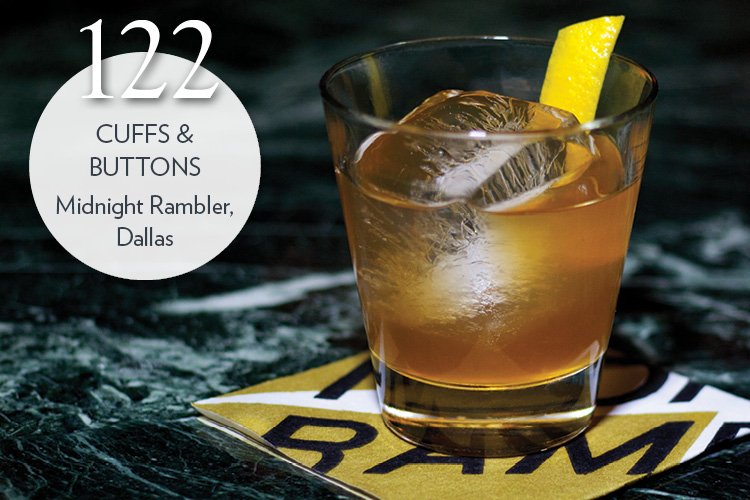 Cocktail lore is fascinating and can add whimsy to a well-crafted beverage program. At Midnight Rambler, a chic, underground cocktail lounge, the storied Cuffs & Buttons cocktail has seen resounding success.

“It drinks like an enhanced Old Fashioned with restrained spice and stone-fruit notes,” says Chad Solomon, Co-Creator. “As the drink sits and takes on more dilution, the flavors continue to open up and develop in the glass. Although you cannot pick it out in the drink, black cardamom is the keystone ingredient making the other flavors work together. Black pepper, as well, is imperceptible, but helps enhance the mouthfeel, imparting a roundness on the palate.”

Taking the name from a classic New Orleans drink created in 1874 by Martin Wilkes Heron, Cuffs & Buttons was given its name in response to another popular drink at the time called Hats & Tails. Heron’s version featured bourbon flavored with honey, vanilla, lemon, cinnamon, cloves, cherries and peach brandy.

“We’ve updated the drink by reimagining it as a ‘fancy’ cocktail instead of a liqueur or flavored bourbon,” says Solomon. “Historically, Heron supposedly added the aromatics to the bourbon and let it infuse for several days. I’ve updated the infusion process by using sous-vide technology to make a concentrate that includes Buffalo Trace bourbon and clove, cassia, black pepper, vanilla bean, black cardamom and bitter orange peel.”

The drink is cooled and the solids filtered off. A small amount of the concentrate is then added to plain Buffalo Trace, along with orange blossom honey, a tiny amount of peach liqueur, Peychaud bitters, and a mineral saline solution. It’s served over a large ice cube and garnished with a lemon twist.