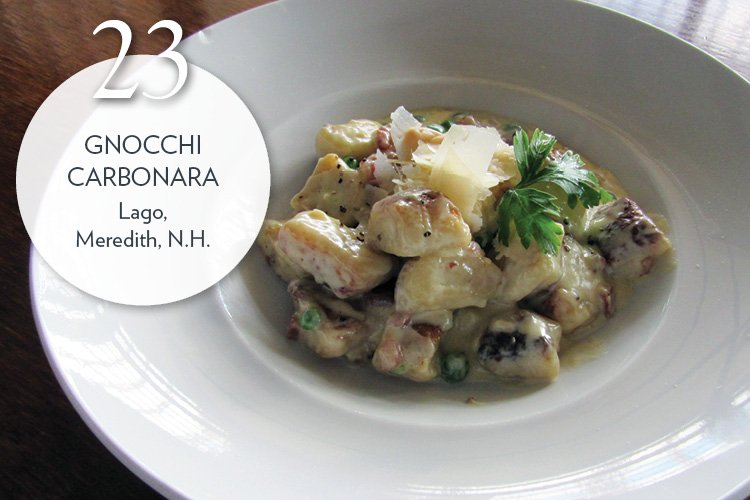 Spaghetti Carbonara is one of those dishes that inspires dogged faithfulness among diners. So when Lago, a lakeside Italian concept of The Common Man family of restaurants, set out to revamp the menu, the question was: Could the popular dish of spaghetti, eggs and bacon get a facelift somehow?

“We wanted to redirect the food, while keeping it approachable and offering some of the classics in a less familiar format,” says Malik Hammond, The Common Man’s Culinary Director.

Meanwhile, the team was also looking at how to menu another dish: gnocchi. Hammond says restaurants usually buy pre-made gnocchi, which often lack the pillowy texture. It didn’t take long before the team decided to make gnocchi in house, and the two dishes became one. “Gnocchi Carbonara was born, and now I’ll never have carbonara any other way if I have a choice,” says Hammond.

“Sous Chef Pat Dea made so much gnocchi that he could do it in his sleep. We add peas, and the balance between the rich creaminess of the eggs, the sweet burst of the peas, the salty depth of the rendered pancetta, the sharpness of the cheese, and the soft melt of the pillows of gnocchi just can’t be beat,” he says. “Guests come back to share a plate for the table if they weren’t getting a dish for themselves!”