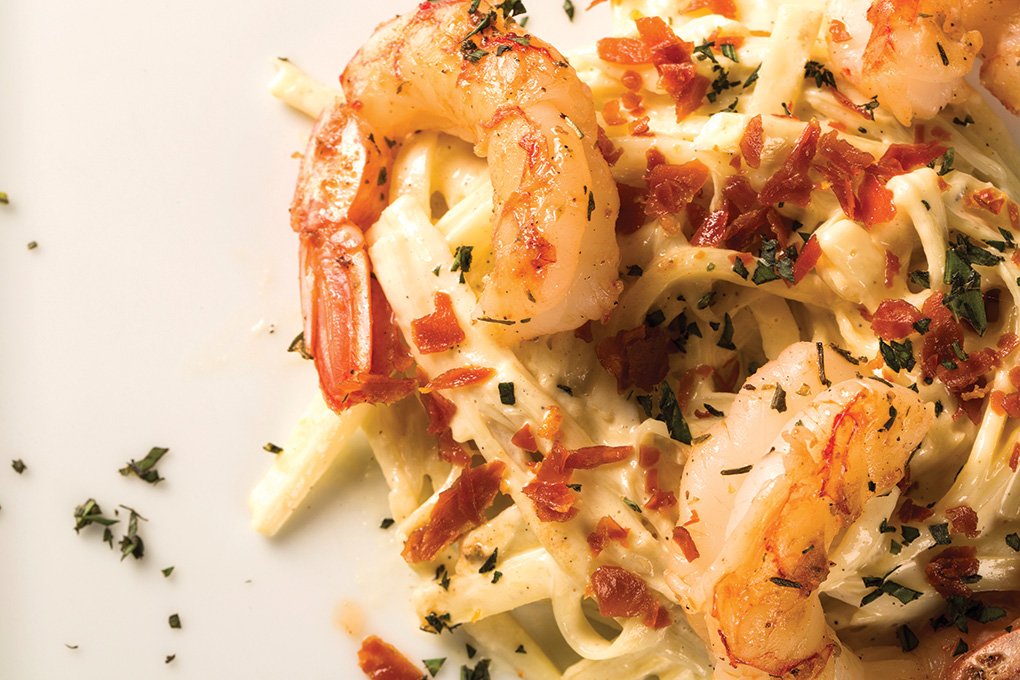 Tapping into Alfredo’s built-in appeal requires the simplest of touches—perhaps a hint of Gorgonzola or an infusion of spices, like ancho or smoked paprika.

The quest for the next big flavor, the new runaway menu item, is a worthy one. It drives the foodservice industry and crystallizes the staggering creativity among culinarians. Show-stopping innovation typically lasers in on the “inception” and “adoption” parts of the Menu Adoption Cycle, as defined by Datassential years ago.

Rounding out that circle of life is “proliferation” and “ubiquity.” Once a flavor trend hits that last stage, it has reached maturity and can be found everywhere, from quick service to convenience stores.

Datassential points to a number of ingredients as markers for these stages. Yuzu and togarashi, for instance, still live in the inception stage. Harissa and farro can be found in the adoption part of the cycle, while hummus and Greek yogurt are further down the pike in proliferation.

Ubiquity hosts many iconic flavors and forms, including mac and cheese, maple and pesto.

Although it’s tempting to look at those late-stage flavors as lacking inspiration, the built-in recognition and earned-over-time affection can be leveraged while still serving up modern dishes. In fact, it’s well known that you can push further within familiar confines than you can with proliferating flavors. The challenge, then, is maximizing the popularity of ubiquitous flavors while making them signature and flavor-forward.

“We’re in a nuclear arms race of innovation in the casual-dining space,” says Eric Stangarone, founder of Food Thinking, a food innovation consultancy based in San Francisco, and partner at En Su Boca Restaurants in Richmond, Va. “An underused strategy is to put the ubiquitous ingredient on a pedestal, making it the star.”

To be sure, that’s an established part of R&D, but he drives home the point that the often untapped potential for reinvention and modernization is huge. It’s all about the approach.

How to Work With Ubiquity

Andrew Hunter, founder of the eponymous culinary development agency based in Los Angeles, looks at flavors in ubiquity and strategizes about how to amp up what makes them iconic, familiar and sought after. “It’s important to identify what you want to bring forward, then add something else to give it a spin so it’s not the same as the restaurant down the street,” he says.

Nick Saba, chef/founder of Terra Culinary Services in Yorba Linda, Calif., agrees. “It’s about adding depth to those ubiquitous flavors. You don’t want to mask them or force them into profiles that don’t work,” he says. The magic is applying deft technique and culinary creativity to these now-classic flavors. Maybe that means using ubiquitous flavors in unexpected ways.

Buffalo cauliflower is one of the greatest ambassadors for success in this strategy. “Using a ubiquity-level trend in something more trend-forward can give it new life,” says Brian Darr, managing director of Datassential. “Some of this innovation can also be using these flavors tongue-in-cheek—like taking unique ingredients and pairing them with common sauces or flavors.”

The challenge is posed by Hunter: “As culinary innovators, how do we stay within the confines of cultural expectation while venturing outside the lines to create our own unique signature?”

The list of flavors living in ubiquity is long. And although many warrant modern exploration, we highlight four that hold potential for serious stardom in today’s foodservice landscape: teriyaki, Buffalo, ranch and Alfredo. They are, of course, familiar, but they’re also versatile, and boast an innate craveability worthy of exploitation.

“These are time-tested, well-loved flavors,” says Stangarone. “The presentations should be contemporary, the preparation should include modern, inspired techniques, and the dish should always reflect the personality of the brand.”

Crispy hushpuppies studded with jalapeño get a refreshing cool-down with a creamy icebox buttermilk ranch dip.

Back To The Ranch

Ranch dressing is one of those ingredients that promises so much to the consumer. It’s an iconic American flavor, and one that chefs are turning to over and over again for creative recipe ideation.

People are passionate about “their” ranch. Similar to cola and ketchup, ranch has a definite standard of identity. If you deviate too far, your guests will rebel. Here are ways to make ranch fresh and unique while staying true to its populist form:

Fresh Dairy: Blend fresh, ice-cold buttermilk into powdered ranch. To make a richer and thicker version, add an equal part of sour cream or Mexican crema. If you’re aiming for a more gourmet version, stir in a spoonful of crème fraîche or mascarpone to finish.

Fresh Herbs: The herbs in ranch are dried parsley, chives and dill, so supplement those with a handful each of chopped fresh. Other fresh herbs such as basil and tarragon can be fair game as well.

Ice Cold And Frothy: Store a pan of ranch in an ice bath and pulse it with an immersion blender before ladling it into a cup for dipping or over fresh greens for dressing.

The familiarity and popularity of dishes like fettuccine Alfredo make it a smart springboard for easy signature innovations.

That’s the beauty of playing with a flavor like Alfredo—it anchors the consumer to the comfort zone while providing a canvas for safe adventure. “Take a three-daypart approach to innovation around ubiquity,” says Nick Saba. “Maybe work the flavor into a chicken-and-waffles concept, then work it into a sandwich and pasta, too.”

4 Ways to Make Alfredo the Star

Alfredo sauce is a great carrier for unique flavors—not only for pasta dishes, but as a topping for proteins, like fish, chicken and red meat. Here are four ideas:

A perfect union of an inception-stage flavor with a ubiquitous one, this burger from Dirty Habit at the Hotel Monaco in Washington, D.C., boasts Japanese mayo and teriyaki.

Boasting a long run in the United States, teriyaki was part of the first wave of Asian flavors to find a foothold here. This savory sauce has umami coded into its DNA. Modern trends give teriyaki new opportunity—from Japanese comfort food to bowl builds, better burgers and snack-worthy meatballs.

During a recent R&D session, Andrew Hunter created Hawaiian-style meatballs, modernizing the teriyaki sauce by introducing coconut milk as a foundational flavor. “I also added roasted pineapples to the teriyaki,” he says. “Roasting the fruit gives it some nice umami, and overall, it adds another dimension.”

The Comedy Zone in Greenville, N.C., features chicken wings in a whiskey-teriyaki sauce, highlighting its aptitude when it comes to pairing with other bold flavors.

Teriyaki brings a lot to modern flavor strategy. It’s got an on-trend Hawaiian vibe, as well as a built-in balance of sweet and savory—a combination that’s resonating with today’s diners. Here are five ways teriyaki is taking the spotlight on menus today:

Wing Sauces Hit The Spot: The most flavor-forward innovation in teriyaki is taking place on the chicken wings menu, a veritable playground for sauce experimentation.

Mexican Mash-Ups: As they are with most Asian-inspired ingredient additions, tacos and burritos are a friendly format for teriyaki-seasoned fillings.

The Classics: From salmon and chicken-and-rice dishes to burgers and chicken sandwiches, the standard applications of teriyaki still hold, and benefit from both classic execution and modern takes.

This classic, craveable combination of hot sauce, butter and cayenne is undergoing a thorough exploration of its flavor system today.

At A&E Supply Co. in Brooklyn, N.Y., an iceberg wedge salad is dotted with bits of Buffalo chicken confit.