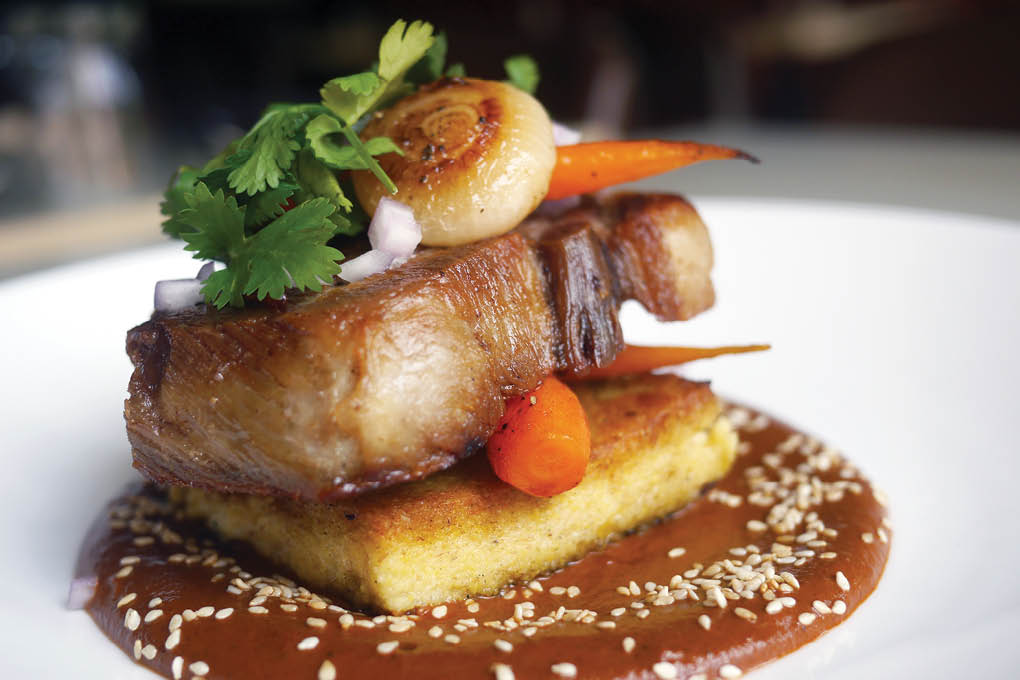 The most important markers in foodservice today are culinary craftsmanship and developed flavor. Power terms like “hand-crafted” and “house-pickled” convey that craftsmanship, touting authenticity and technique.

Modern fast casuals have certainly tapped into this, showcasing big flavor in dishes like braised chicken thighs or pork butt, perhaps featured in tacos or salads or over flatbreads.

What’s interesting now is the innovation around these classic techniques, where chefs are applying brining and braising in unexpected places. Or they’re featuring creative flavor combinations when using the technique, building a compelling story around menu items to make them both signature and craveable.

“I use the brining process quite a bit. I like a deep brine for beef. This blueberry brine really helps keep that ruby-red color of beef and adds a nice flavor for the grill or smoker.”

“I smoke the ribs for four hours and then take them to 203 degrees and make a pulled pork. It’s an excellent way to get a lot of smoke into the pork, and the brine has a cool ginger flavor profile with sweet and salt.”

He uses this brined pork in a pulled pork taco with slaw and micro cilantro.

When we created the Mustard Braised Cabbage, we had in mind the region of Alsace with that combination of French and German influence. We wanted a dish that would go well with Riesling or beer. The braising process condenses the flavors and pulls out the natural sweetness of the cabbage, and the result is a comforting dish that is not too sweet.

For City Tap House’s Korean Tacos, we chose to use a stout beer for the braise. Its roasted, caramelized, malty and coffee-like flavors enhance those flavors already present in the seared beef and add to the depth and complexity of the flavor. The low, slow braising breaks down the collagen in the short ribs, and the meat develops a soft, silky texture. The additional benefit of braising is the delicious, flavor-packed braising liquid. It retains all of the flavors developed during the cooking process. After cooking, we keep the liquid and combine it with the pulled short rib meat at service to further enhance and deepen flavors.

The new menu at ROOF on the Wit in Chicago pulls from Moorish Spain and the surrounding spice-enriched regions. Nathan Sears, executive chef, created a menu that matches a late-night vibe—social, shareable plates.

“For the paneer, we start with a curd that we make in-house and press to extract all the liquids to make a tight cheese that won’t melt in the tomato sauce. For the braise, we use a cinnamon and spiced tomato sauce that we cook slowly with the cheese so it will absorb all of the delicious flavors that carry through with every bite.”

“We tried lots of different brines and starch-spray methods, but we found that apple brining left a delicate and subtle hint of sweetness to the fry. Also, it fries much better in the fryer, and the viable prime shelf life of the fry is extended.”

Innovation around fried chicken continues at lightning speed, with many chefs relying on the brine to give theirs a competitive edge.

The Dill Brined Fried Chicken at Moshulu Restaurant in Philadelphia stars a brine made with brown sugar, salt and dill seed. “The flavors are salty with a fragrance of pickles and dill,” says Anthony M. Bonett, executive chef of this New American restaurant, housed on a tall ship.

“The flavor of the brine introduces salt and sugar to the chicken and ties together other key elements in the dish. The pickle flavor also helps to cut down the fattiness of the fried chicken.”

He serves it with smoked cheddar grits, coleslaw and habanero barbecue sauce.