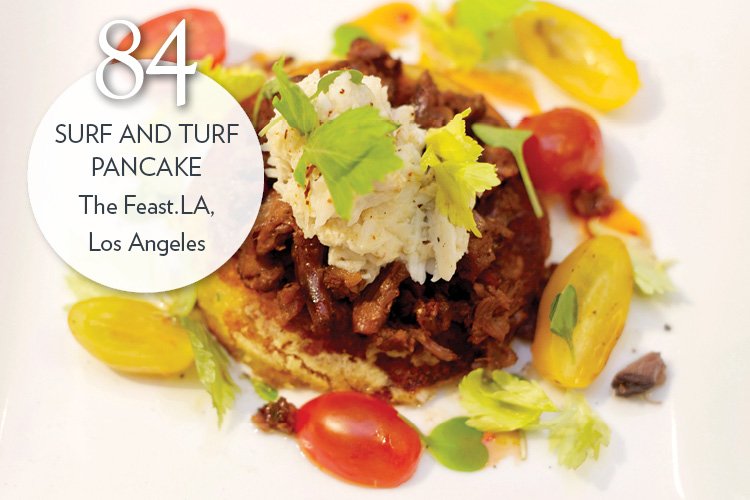 The key to successful pop-up restaurants is phenomenal word of mouth. Dishes have to bring that swagger that belongs to the inherent specialness of a limited-time experience. In addition to other culinary endeavors, Chef Nigel Henderson runs a pop-up series through his company The Feast.LA. For a recent brunch series, he served up an enticing savory pancake crowned with a surf-and-turf combination of garlic-poached crab and wine-braised oxtails.

“This dish came from the combining of leftovers from two different dishes that we serve at our brunch pop-up series,” says Henderson, who has a strong New Orleans culinary background that includes a stint under Leah Chase and her grandson Edgar “Dooky” Chase IV.

“When introduced, our guests were excited about anything surf-and-turf, and the combination of oxtails and crab sparked a lot of interest.” He braises the oxtail for four hours in red wine, mirepoix, Scotch bonnet peppers and jalapeño. He then removes the meat from the bones and reduces the braising liquid.

“For pick up, the braising liquid is combined with a Steen’s cane syrup gastrique, giving the oxtails a spicy, bold and sweet flavor profile,” he says. Jumbo lump crab is lightly poached in roasted garlic and butter. Both the oxtail and crab sit atop hot-water cornbread. “It’s a play on Southern/Jamaican-style Johnny cakes—the crispiness gives texture to the dish,” he says. The brunch special is finished with micro wasabi. When he’s not hosting pop-ups, Henderson splits his time between private clients and curating creative culinary experiences.