Ale of a Sandwich Best of Flavor 2017 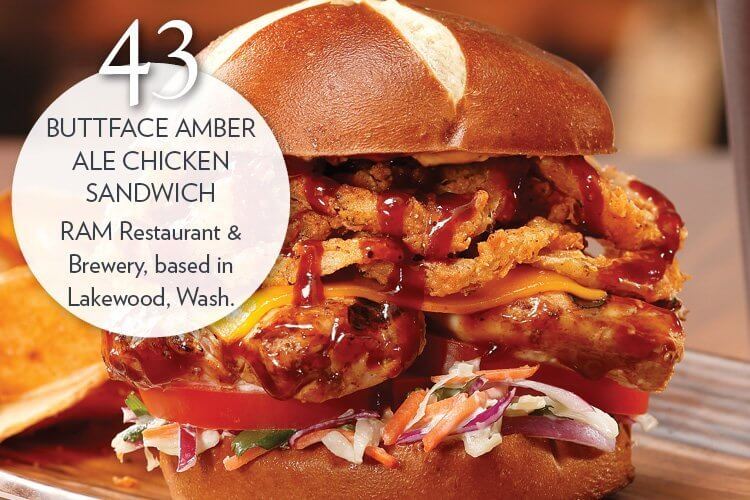 You know you’ve got a signature menu item when you remove it to make way for new dishes and get overwhelming feedback from your customers on how much they loved it. RAM Restaurant & Brewery, with 23 units in six states, ran a chicken sandwich in 2008 as part of its annual Burgerama promotion. It was taken off the menu after the promotion, but customer comments continued—even after a few years went by. “We brought it back last year with a few updated ingredients, and, as they say, ‘the rest is history,’” says James Cassidy, Culinary & Purchasing Director for The RAM Restaurant Group.

Highlighting RAM’s signature beer-infused flavor treatments, the Buttface Amber Ale Chicken Sandwich stars a half-pound chicken breast (hormone- and antibiotic-free) marinated for at least 24 hours in RAM’s signature marinade (Buttface Amber Ale, lime juice, onion, garlic, cilantro, chipotle, cayenne, chile powder, cumin, smoke, salt and pepper, along with a secret ingredient). “When we created this marinade, our culinary team had an ‘Aha!’ moment and knew we had the perfect blend of flavors that were going to make this menu item craveable,” he says.

Grilled over an open flame, the chicken is basted with Total Disorder Porter BBQ Sauce then placed on a Bavarian-style pretzel bun over a “kickin’ slaw,” dressed with sour cream and horseradish. Tomato, aged Wisconsin cheddar, zesty onion crisps, a drizzle of more barbecue sauce and a swipe of smoky chipotle mayonnaise finish the chicken sandwich.

“This is a flavor experience with a phenomenal taste sensation, and also a craft beer lover’s favorite,” says Cassidy. “The sandwich has a great finish because of the infusion of the two signature award-winning beer flavors—all presented on an authentic Bavarian-style pretzel bun that is made for us in a bakery in Chicago.”