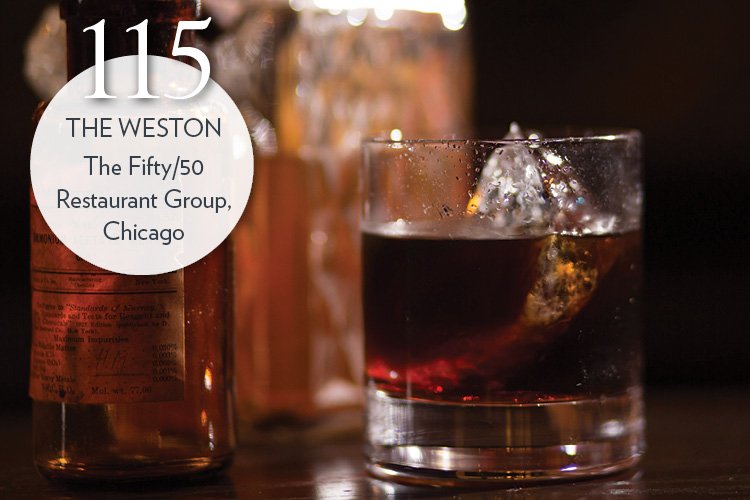 The Weston is in constant demand at seven of the 12-and-growing restaurants of The Fifty/50 Restaurant Group. “The drink illustrates a vintage-meets-modern aesthetic, combining wheated bourbon—typically Old Weller 107—coffee syrup made from Dark Matter Coffee beans, and a touch of pipe tobacco,” says Scott Weiner, Co-Founder. “Although the flavors in the drink recall a smoky, Old World, speakeasy vibe, the story behind the drink is set in our beverage director’s present-day Chicago.”

If the cocktail could talk, it would tell the story of his typical daily routine. “The inspiration was a tongue-in-cheek combination of all the flavors I encounter on my day off,” says Beverage Director Benjamin Schiller, who named the drink Weston, his middle name.

“Starting with Dark Matter espresso, chocolate notes from those expensive chocolate bars at West Town Bakery that I’m a sucker for, followed by cinnamon flavors from my favorite curry, and concluding with whiskey and pipe notes from the drink and smoke I have on my patio at day’s end.” So the drink not only offers an exquisite balance of unique flavors, it tells a story. “It’s been well received and reordered at Fifty/50 Restaurant Group locations for more than four years,” says Weiner. “We constantly have people ordering this cocktail simply because of word-of-mouth.”

Partly in response to this drink, the restaurant group has recently started creating the Dark Matter coffee syrup in bulk at its cocktail lab. “Eventually we will bottle this and hope to sell it in specialty food stores,” says Weiner.