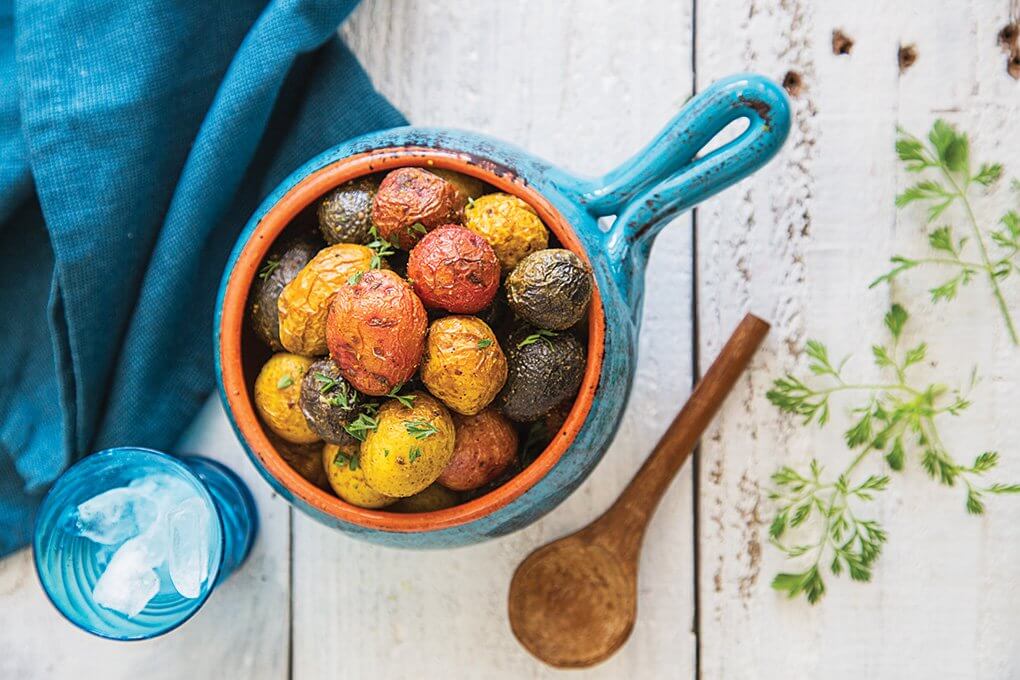 Familiar potatoes become modern and flavor-forward at Tava Kitchen, an Indian-inspired fast casual. Oven-baked whole marble potatoes are dusted with Tava spice for a signature, yet approachable side dish.

At Bar Tartine in San Francisco, a small plate features mini potatoes roasted and smoked, smashed and deep fried, then tossed with herbs and a black garlic vinaigrette. A dollop of ramp mayonnaise ratchets up the craveability factor even more.

In Reston, Va., Vinifera Wine Bar & Bistro serves a side of salt-roasted patatas bravas, which stars whole baby Yukon potatoes roasted in a salt crust, deep fried then tossed in paprika oil and caper relish and accompanied by a saffron aïoli.

Something wonderful is happening in the world of potatoes. Minis, marbles, fingerlings, young, new—chefs are tapping into their menu potential, understanding that they are a safe platform for flavor innovation. They practically cry out for techniques like smoking, smashing, frying, roasting, blistering—offering up all of themselves for textural play and flavor-carrying.

There’s an elegance and an eatability that comes with small potatoes. Modern small potato dishes offer portion control to diners, packaged in a more manageable, shareable and approachable presentation. Propelled by the veg-centric movement, chefs are leveraging the glorious qualities found in these small gems.

With as much attention to flavor, technique and presentation as granted to the Brussels sprout, the cauliflower and the carrot, small potatoes are showing off the ability to wow as bar bites, shareables and sides.

“Few things are better than a perfectly salty, crispy-on-the-outside and creamy-on-the-inside taste of potato goodness. Mashed, boiled, fried or baked, the potato is one of the kitchen’s most adaptive and familiar ingredients,” says Louis Maskin, strategist with The Culinary Edge. “It is no wonder that the mini potato is making its way into the limelight, lending itself as a wonderful platform for creativity.” 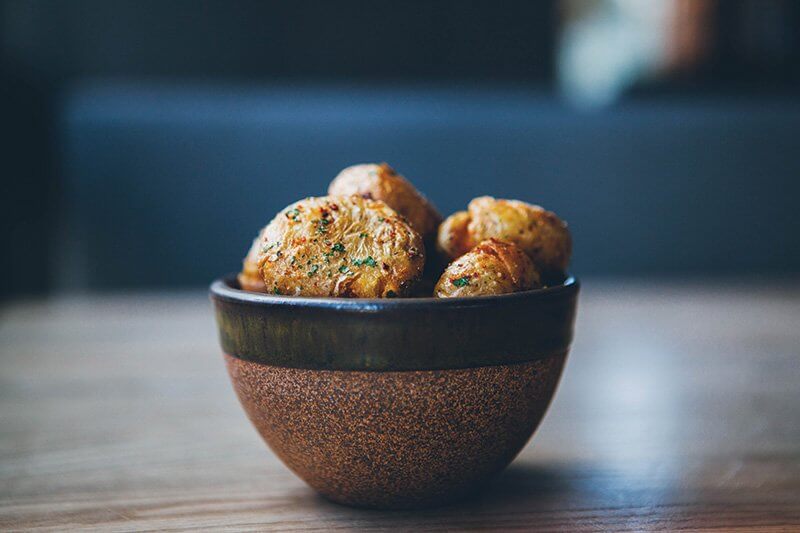 At Otium in Los Angeles, Crispy Potatoes make for easy eating with a seasoning of lemon salt, Aleppo pepper and crème fraîche.

Another driver propelling menu innovation around small potatoes is the momentum on the retail side, both in varietals offered in the produce section and new convenience products.

“Have you seen the grocery store aisle lately? Little potatoes are popping up everywhere,” says Rob Corliss, chef and founder of ATE (All Things Epicurean), a foodservice consulting firm. “In addition to the miniature varieties of Red Bliss, Yukon Gold and purple potatoes, there are now microwaveable platters and to-go cups of mini potatoes. It seems that the snacking lifestyle is now becoming ingredient-specific, hence small potatoes. Eating patterns have shifted to clockless meal periods.”

That growing snacking category—which keeps getting more inventive as consumers look for flexible options according to their schedules—is key in helping position small potatoes as a bar snack and appetizer.

“Among the products winning innovation awards at the recent SIAL global food conference was a new fresh convenience product—small potatoes in a microwaveable cup with sauce in the lid,” says Sharon Olson, executive director, Culinary Visions Panel. “The potatoes are already washed and ready to eat with the skin on, and they are available with a variety of different sauces. These products are fast, fun and fresh—the trifecta of consumer appeal.”

Small potatoes have an unrivaled ability to take on flavor. And as they are endlessly familiar to diners, that potential opens the doors for more adventurous ingredients, like miso, chimichurri and smoked sea salt.

At Lolinda in San Francisco, a side of roasted mini potatoes is tossed in chimichurri butter. In his new cookbook, Smashed, Mashed, Boiled and Baked, and Fried, Too! (Workman Publishing, 2016), Raghavan Iyer shows off that adventurous flavor potential in recipes like Crash & Burn Potatoes, which feature mini red potatoes that are boiled, then smashed and roasted, glazed with malt vinegar and flavored with red chiles, cumin, onion, garlic, ginger and cinnamon. 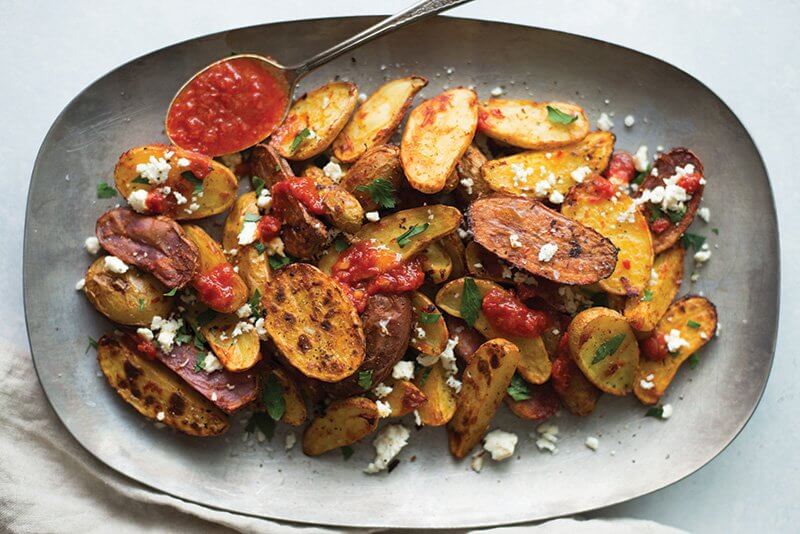 Fingerling potatoes roasted with cumin and boosted with harissa and feta demonstrate the flavor-forward side of this trend.

At L’Amico in New York, Laurent Tourondel marble potatoes stand in for pasta in a Cacio e Pepe side dish. “Marble potatoes work well for this particular dish as they adhere nicely to the cheese and are the perfect size for a side dish. The layer of Parmesan cheese makes for a crispy texture with lots of flavor,” he says.

Chef Edward Lee balances an adventurous appetizer of Octopus “Bacon” with smashed fingerlings at MilkWood in Louisville, Ky. To achieve the bacon quality in the octopus, he smokes it, then slow cooks it in bacon fat. He salt-bakes the fingerlings until tender, smashes them and pan fries them in clarified butter. Lee then spoons the octopus over top, adding chile threads and jalapeño to finish. “What I love about the small potatoes is the skin-to-flesh ratio,” says Lee. “Everyone loves the crispy skin. Fingerlings are easy to use, consistent and visually appealing.”

Small potatoes are nimble flavor carriers, encouraging modern flavor techniques like salt-baking, brining and smoking because of their manageable size. “There are so many ways to go here,” says Pam Smith, nutritionist and culinary consultant. “Simple herb-roasting with dips or poutine-like smothering, hulled and stuffed, crashed or smashed, and then maybe topped or layered in skillets. As bar bites, appetizers and the star of veg-centric plates, bite-sized taters are an unbelievably great and diverse flavor carrier.” At Raclette in New York, young Yukon Golds are smashed and served with raclette cheese as a bar bite.

Dylan Fultineer, executive chef at Rapp Session in Richmond, Va., a casual seafood-centric offshoot of the Rappahannock Oyster Co., was trying to come up with a new snackable item for his menu. Standing on the line, he was popping roasted new potatoes into his mouth while ideating with his team around craveable small plates. “It clicked, and it was so clear to us what we needed to do,” he says. “There’s a fresh-from-the-ground flavor that you get from small potatoes that’s wonderful. And there’s a great eatability with them—perfect size for a share plate or bar snack. They’re also wonderfully familiar and comforting.”

He roasts new potatoes or fingerlings, depending on availability, in the oven until they caramelize, seasons them with sea salt and serves them with a dipping sauce of Calabrian aïoli. “They’re delicious, and they fire on all fronts with craveability,” he says. 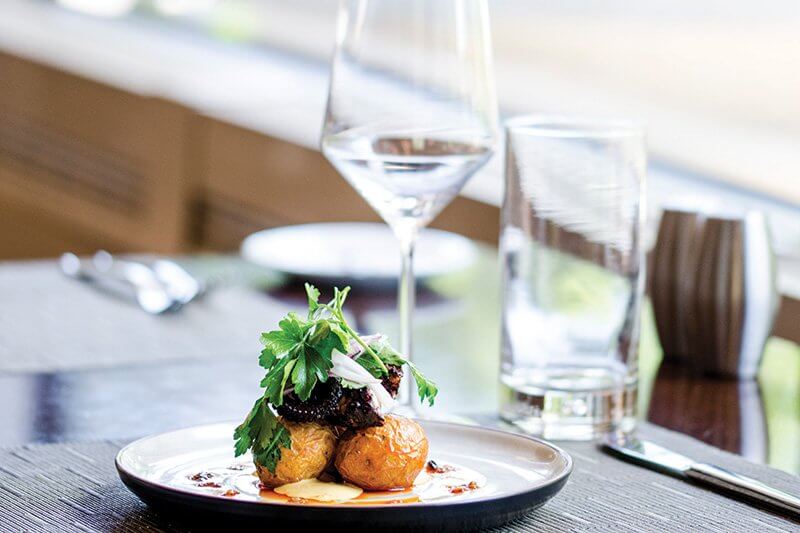 Baby Yukon potatoes are roasted in a salt crust then deep fried and tossed with paprika oil at Vinifera in Reston, Va., accenting plancha-seared Spanish octopus.

At Tava Kitchen, a California-based fast casual that serves Indian-inspired food, the side of Baked Marble Potatoes sells well. A combination of purple, red and gold potatoes is seasoned with a spice blend, then vacuum-sealed to lock in flavor. They’re roasted, salted heavily and tossed in curry spices. “The small potatoes carry these big flavors beautifully,” says Hasnain Zaidi, co-founder and COO. “They also help us offer something very familiar while letting us showcase complex, delicious flavors.”

In Chicago, The Promontory’s Matthew Sliwinski, chef de cuisine, pairs grilled King salmon with pee-wee confit potatoes, along with sweet corn, tarragon, chanterelle mushrooms, blueberry and country ham tuile. He confits the potatoes in olive oil, garlic and thyme, then cuts and roasts them on a plancha. “Small potatoes absorb the flavors intensely in a short amount of time, and we’re all about getting as much flavor as possible into our guests’ mouths, so it works out well for everyone,” he says. “I like these varietals because they have a light, subtle flavor and creamy texture.”

Apart from the opportunity for menu differentiation, craveability and flavor building, menuing small potatoes comes loaded with back-of-house advantages, too. “These small potatoes can perform very much like larger potatoes, but require much less labor, assuming an operator is not going to try to peel them,” says Maeve Webster, president of Menu Matters. “In fact, as most of these are harvested very early on in their life, the skins are so fragile that peeling is really irrelevant and a waste of resources.”

Of course, their small size also reduces cut time. “This can facilitate an operator to try preparations like salt-curing and other less common preps they might not have time for with larger potatoes,” she says. For example, Semilla in Brooklyn, N.Y., prepares its fingerling potatoes in a celery salt crust, then serves them with rotating dipping sauces.

The lightly smoked baby potatoes at The Loyalist in Chicago are crushed and fried until crispy and tender, then served with a salt-cured egg and sauerkraut. 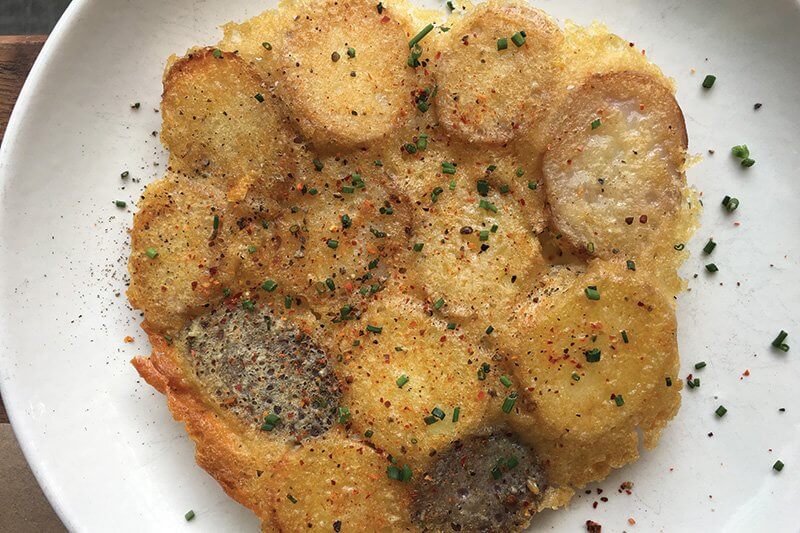 Sliced marble potatoes form the base in this Cacio e Pepe side dish at L’Amico in New York.

With their tender peel intact and their countenance kept whole, small potatoes convey rusticity and wholesomeness effortlessly. Plus, their ease of prep coupled with craveability potential make for a winning menu opportunity.

“From a feasibility perspective, the mini potato is a no-brainer,” says The Culinary Edge’s Maskin. “They’re easy to manage with quick cook times, they can receive the same culinary treatment as their larger counterparts, and they can adapt to endless culinary profiles,” he says. “How can anybody resist diving into a batch of fingerlings given the same TLC as a housemade french fry?” 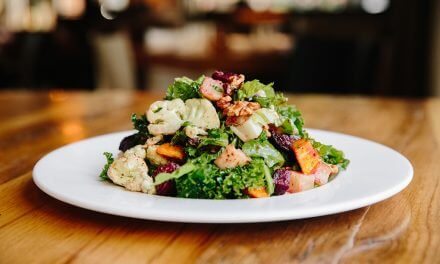 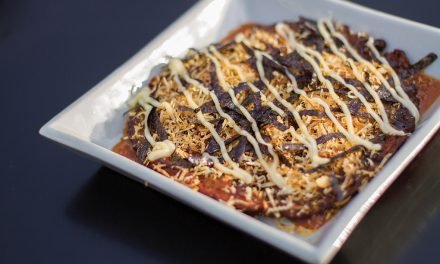 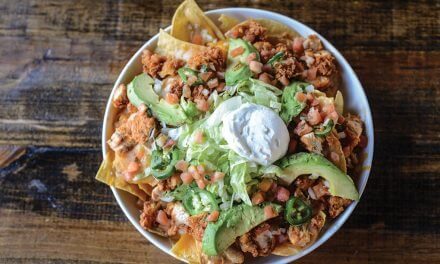 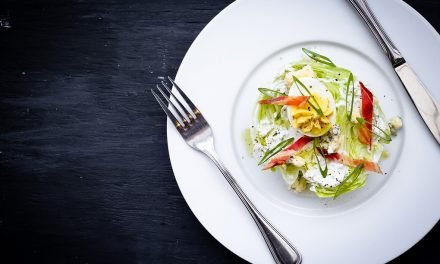